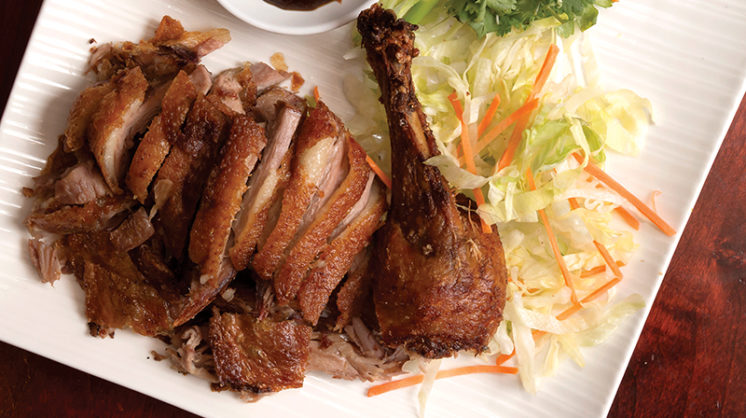 On one hand, the quest for innovation is one of the forces driving the development of human civilization. On the other hand, when a good thing comes along, it’s worth hanging on to it. Case in point: the Chinese dish known as Peking duck remains a delicacy seven centuries after it was invented.

That’s not an exaggeration: a special recipe for roast fowl is listed in an official cookbook-slash-manual for the Yuan Emperor’s kitchen dating back to 1330. It might even be a conservative estimate, given that there are indications of a similar dish in existence since the 400s. In post-imperialist times, it’s been served to visiting dignitaries from Kissinger to Castro, and one restaurant specializing in it has been dishing it up for almost 200 years.

If you’re in the mood to sample this time-honored treat, you needn’t book a trip to Beijing; Peking duck is also one of the house specialties at landmark OKC Asian restaurant Dot Wo Garden. Specially seasoned and roasted to savory perfection, it is served boneless and sliced thin with its signature crispy skin ready to crackle gently beneath your teeth. Wrap it in a lotus bun with scallions, lettuce and a dab of their thick, salty-sweet hoisin sauce and you have a dish that can realistically be called fit for an emperor. Plus, it pairs perfectly with Dot Wo’s renowned pot stickers.

Pay a visit to Dot Wo Garden and sample the Peking duck for yourself, and remember this old proverb: The classics never go out of style.