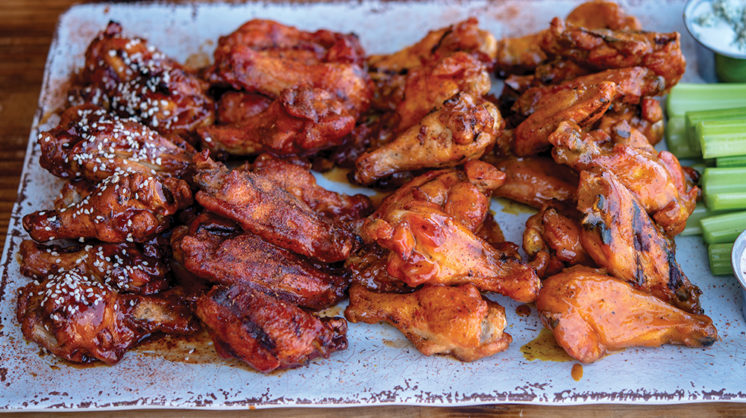 Found at 930 E 2nd in Edmond, just east of UCO, Eddie’s Bar and Grill is the namesake and magnum opus of Eddie Wrenn. While its ample dark wood black accents and low lighting make it a cozy spot for a beer and a burger (pro tip: The signature Eddie’s burger is an excellent choice), especially when there’s a game on the giant screens, the restaurant’s biggest, most popular claim to fame is its wings.

Grilled to succulent perfection and sold by the pound, they’re generously basted in one of 15 sauces from gochujang to Carolina mustard to a tastebud-searing – in a good way – scorpion pepper sauce. On Wednesdays, when they’re on special for a tantalizing 50 cents apiece, “we’ll sell anywhere from 6,000 to 8,000,” says Wrenn.

Fans will also soon be able to find Wrenn’s recipe at new restaurant Hott Wings (the extra t is presumably for extra temperature), coming to the Edmond Railyard complex, 23 W First in the former Cross Timbers lumber yard. The mixed-use open concept will also be home to Roxy’s Ice Cream, Wicked Hangry, The Chosen Juan taco shop and more. Wrenn says he thinks of it as “a cross between The Jones Assembly and Bleu Garten,” and a big development for Edmond’s future. It should be opening any month now, so stay tuned …

In the meantime, Eddie’s does prime rib on Fridays, and flies fresh salmon in regularly, so there’s plenty to tempt a palate. But for taste and price, especially if you’re in the mood for spice, it’s definitely worth giving the wings a test flight.