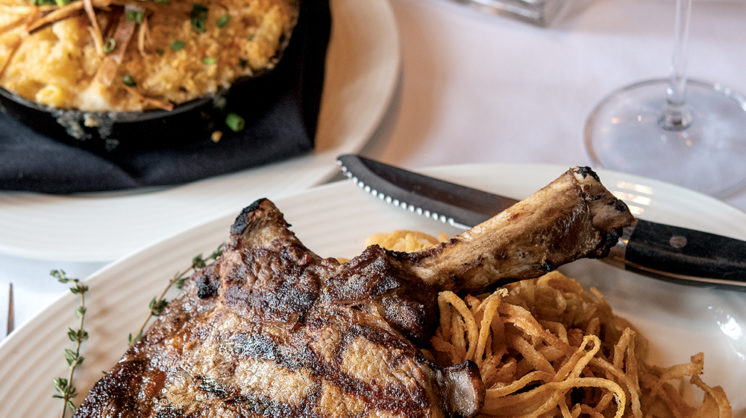 The sky was gray and the wind bitter as it howled over the raw earth inside the Chickasaw Bricktown Ballpark. With the bleachers empty and the field in the process of being replaced, it looked especially bleak – the kind of sight that might make David Halberstam or George Will weep – but the good news is that spring is coming. And in the meantime, there’s quite a lot to love across the street in the warm, spacious environs of Mickey Mantle’s Steakhouse, 7 Mickey Mantle Drive.

It’s named for the Commerce Comet and has a few decorative touches on the walls and menu, but you needn’t be a fan of the Yankees in particular or America’s pastime in general to find a trip to this restaurant immensely enjoyable. The comfortable space and spectacular entrees should be enough to please just about anyone.

Mickey Mantle’s has been a dining mainstay since 2000 – just take a moment to consider the amount of changes that have taken place around it in Bricktown over the century so far – and while its menu is continually evolving, including new sea bass, pork and chicken dishes coming in March, a big part of its staying power is due to the execution on classics such as these: the monstrous Cowboy Cut ribeye (it’s fully 24 ounces) and lobster mac and cheese are top-notch. Top. Notch.

By the way, there will be an especially delectable four-course set menu coming up on Valentine’s Day, with optional extras – check their website at mickeymantlesteakhouse.com for details. And speaking of special occasions: MLB Spring Training starts Feb. 21, and the OKC Dodgers will be back in the Brick April 4. Good times are on deck.