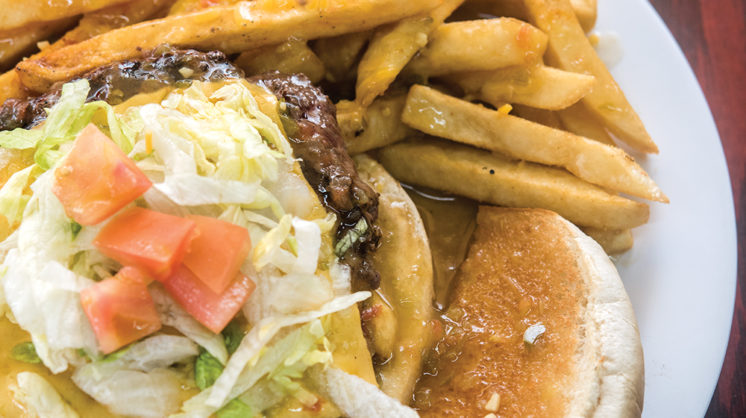 Scott Selburg once told me that he has a fairly reliable method for determining by sight whether a patron is enjoying a burger. “If they don’t ever put it down, I figure it’s a good sign,” he laughed. He was gracious enough not to mention the half-eaten bacon cheeseburger that was clutched in my left hand at the time, but based on it, I have a hard time imagining many diners not enjoying their results at Rocky Mountain Grill.

The restaurant isn’t new to Edmond, but it is now in a new, larger space. After years tucked away near Second and Coltrane, Scott and Tammy recently relocated to 3600 E I-35 Frontage Road. They seized the opportunity to expand their service and menu, now offering dinner, in addition to breakfast and lunch, and to introduce some new decor-slash-inhabitants into the expanded area: The taxidermied ram is from Colorado, and by the time you read this, there should be a bear so big they had to remove one of the windows to get him in.

Of course, the main draw is Selburg’s cooking. Fluffy pancakes to enormous chicken fried steaks to whatever’s on the specials board, he tends to do the classics well, but there’s one secret ingredient that elevates whatever it touches: his house-made green chili sauce. Get it on a breakfast burrito (which will seem impossibly huge, but you can power through), get it on a burger by ordering the Taia’s Special, get a jar of it to take home and cherish. It’s not punishingly fiery, just spicy enough to linger, and to get you thinking about revisiting Rocky Mountain to get another taste. Which you should.