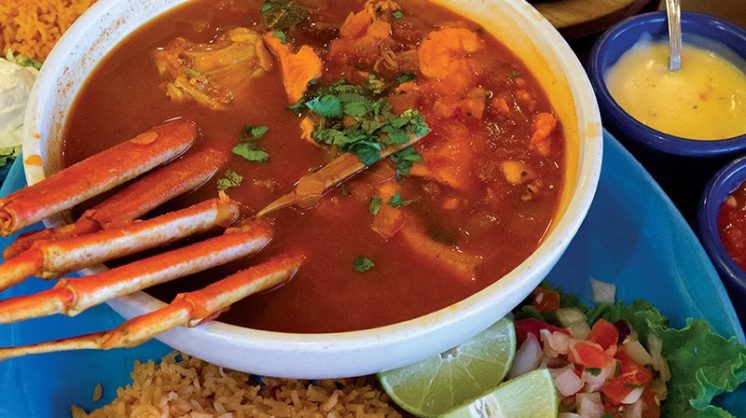 Just south of the Rio Grande in western Mexico, you’ll find the state of Chihuahua, the original home of a native people called the Tarahumara. Travel broadens the mind and is often its own reward, but first you should take a much shorter trip: just south of Moore to the north side of Norman, where you’ll find the Chihuahua-inspired cuisine of Tarahumara’s restaurant.

They do tasty renditions (and big portions) of dishes familiar to Tex-Mex diners – chicken enchiladas and shrimp fajitas and such – as well as less ubiquitous options along the lines of the rich, stew-like Carne Guisada and the Siete Mares dinner. It doesn’t take much of a grasp of Spanish to translate that as “Seven Seas,” and the dish makes good on the name by harnessing the goodness of the waves: fish, shrimp, scallops, oysters, squid and even crab legs combined in an enormous bowl of savory soup. It’s made to order, so it takes a little longer but you can specify whether you prefer the broth to be spicy or mild. Accompanied by an ample side of seasoned rice, fresh limes for an optional snap of citrus and an array of avocado slices, the dish offers the possibility of a different seafood surprise in each mouthful.

Whatever you get, it’s going to be freshly made and delicious – owner and manager Efrain Romero keeps a close eye on quality and taste as dishes are brought into being – and their approach seems to be working: Tarahumara’s celebrated its 15th anniversary last year (in a market that’s not exactly starved for speedy sit-down Mexican options), and we were told plans are in the works for tearing the current building down to replace it with a new, more spacious version. With flavors like these, there’s plenty to look forward to over another 15 years.