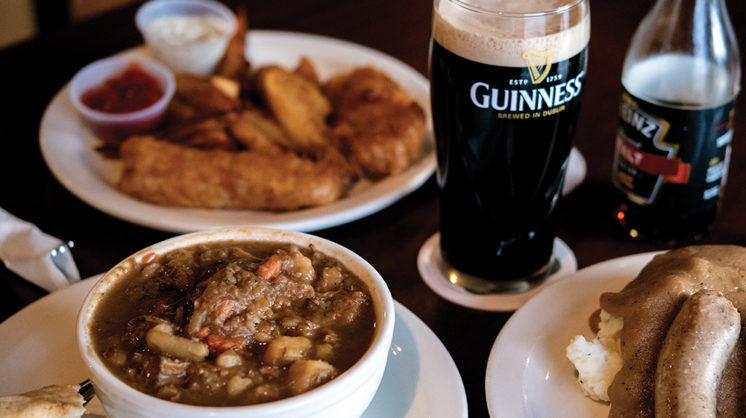 Statistically speaking, you probably aren’t in Choctaw right now. Its population is only somewhere around 12,500, less than 1 percent of the metro overall, and it’s far enough east of OKC proper that you’re unlikely to be passing by unless you have a special reason. Here’s my proposal, though: You should be in Choctaw, preferably soon, and repeatedly. The special reason is at 14471 NE 23rd, and it’s called The Black Raven.

Picture a traditional Irish pub and you’ll have the ambiance almost exact: a dark wood bar gleaming with polish, slightly mismatched chairs, live-edge wood tables … I don’t know whether pubs in Belfast have electric clocks counting down the days/hours/minutes/seconds until St. Patrick’s Day, but it’s a nice visual. The Black Raven plays host to live music on Fridays and Saturdays – only Irish and Celtic musicians for authenticity – and with tap handles representing Smithwick’s, Guinness classic and blonde, Harp, Belhaven Black and Strongbow Cider, you’ll have plenty of excellent options for a pint of refreshment.

The beer also comes in handy as accompaniment to the excellent food, and in multiple cases as ingredients. The delightfully rich beef stew is braised in Guinness, there’s Harp in the breading for the fish and chips and I don’t know what might be in the gravy on the bangers and mash, but I want more of it in my life.
Ash Hall and Scott Wallace have a gem out here in Choctaw, and they run it well. “Everything we make is from scratch,” says Wallace. “There’s a wait sometimes, but it’s authentic, and you’re here for the atmosphere and the result.” To them, and you, I say: “Slainte.”