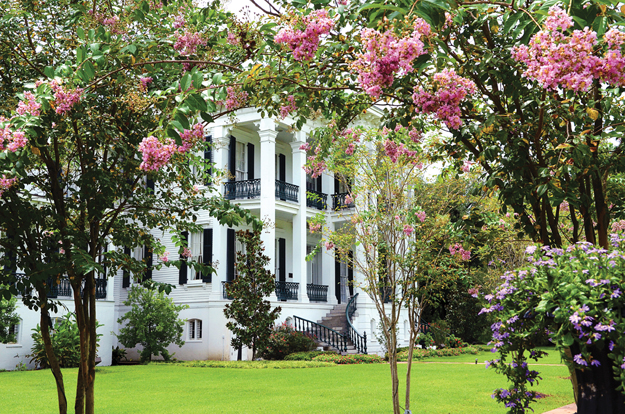 While I have occasionally wished to be a princess, I’ve never really pined to be a Southern Belle. As Jack and I drove up the dark driveway to Nottoway Plantation, I reconsidered, because there stood a house that made Tara look like a cabin. Lighted and majestic, with tall white columns and welcoming balconies overlooking the Mississippi – all of a sudden, I was overcome by the moonlight and magnolias. Yes, I do have an inner Scarlett!

John Hampton Randolph, the original owner of Nottoway, was born in Nottoway County, Virginia. His father was appointed to a federal judgeship by President Andrew Jackson and the family moved to Mississippi. In 1837, John married Emily Liddell, also from a wealthy family. Four years later, the young couple moved to Louisiana, where they owned a cotton plantation.

John was an astute businessman; he began growing sugar cane and his wealth increased, as did his family. He and Emily had 11 children. By 1849, the couple began planning a larger, more opulent home – Nottoway. The house took six years to plan and four more to complete. When finished, the three-story Greek Revival/Italianate mansion had 64 rooms, 12 hand-carved Italian marble fireplaces, three modern bathrooms, 165 doors, 200 windows and 24 two-story square columns.

Randolph opposed secession but when the Civil War began, he supported the Confederacy. He sold much of his sugar and, to protect them, moved a number of slaves and many family valuables to property he leased in Texas. Three of the four Randolph sons fought in the Civil War. Two of them returned.

Emily Randolph and the youngest children remained at Nottoway. During the war the property was occupied by both northern and southern troops, but it sustained minimal damage. It was spared an attack by a Union gunboat by an officer aboard the ship. This man recognized the home and, as he had been a guest there before the war, he called for a cease fire.

Although never as wealthy after the war as he was before, John Randolph managed to regain much of his former financial position. In 1889, six years after his death, Emily sold the plantation. Today it serves as a hotel – perfect for romantic getaways, weddings and other events.

The most stunning room in this magnificent house is the beautiful White Ballroom. According to the plantation history, John Randolph ordered it to be “a pure white in order to offset the beauty of my ladies.” Seven of the Randolph children were girls, so between debuts and weddings, the room served as the setting for many important family occasions.

Intricate plasterwork is a hallmark of the house. The plaster was all made on the property using a blend of mud, clay, horsehair and Spanish moss. A young Irish craftsman, Jeremiah Supple, was paid almost $2,000 for his work. Hand-carved molds were used to create friezes, cornices, medallions and arches.

In the dining room, camellias, Emily Randolph’s favorite flowers, were incorporated into the plasterwork design. The 1845 mahogany table is set with signed Sevres china in a pattern created for King Louis-Philippe of France in 1830.

One wing of the house was called the Garconnière. This is where the boys, once they reached the age of 15, moved with their servants and tutors.

Unusual pieces of furniture in the house include a 1790 clock from England – the oldest piece in the house – and a bustle bench and saber chair in the Tea Room. The rosewood poster bed, armoire and dresser are said to be by William McCracken of New Orleans, 1850.

Did I turn into Miss Scarlett on my visit? No, I was probably more Miss Melanie. The mansion was elegant but my room was in the Overseer’s Cottage! It was very nice and very comfortable – however, no sweeping down the grand staircase for me. I contented myself with the tour of the house (tickets for overnight guests are available at a discounted rate). In addition to the mansion and Overseer’s Cottage, there are also rooms in the Cottages and the Garconnière. The Honeymoon Suite on the lower floor of the Garconnière consists of three rooms: a bedroom with a queen-sized Victorian bed, a bathroom with Jacuzzi and shower and a breakfast area. It also features a private outdoor swimming pool.

The Mansion Restaurant is located on the ground floor of the north rotunda in the mansion. Floor-to-ceiling windows look out on century-old live oaks. Cuisine is Creole-inspired with a dash of Cajun. The Sunday brunch menu includes traditional favorites like Egg Sardou and Crab Cake Benedict or more lunch-type fare like fried catfish with crawfish étouffée. My diet was gone with the wind, but who could resist topping the meal off with a taste of Miss Sharon’s White Chocolate Bread Pudding and Chocolate Bourbon Pecan Pie? Like that ultimate southern belle, I’ll never be hungry again!

Nottoway Plantation Resort is about 20 minutes south of Baton Rouge. Be sure you have a map, as your GPS may have you floating down the Mississippi without a ferry. For reservations or more information visit www.nottoway.com or call 866.527.6884.