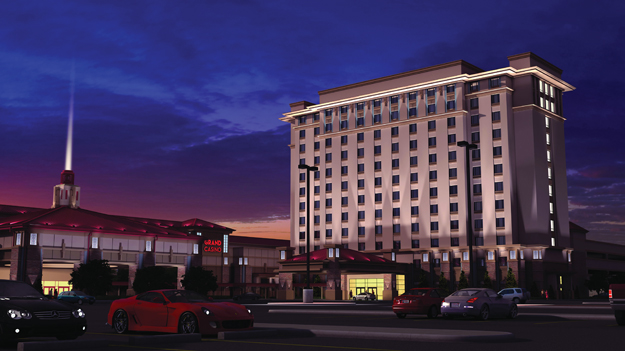 If the circumstances are right and you have the cards, the smart thing to do is double down. Since its opening in 2006, FireLake Grand Casino in Shawnee has increasingly become a beacon beckoning gamblers, diners and entertainment seekers – and the Citizen Potawatomi Nation (CPN) is in the process of making that success pay off.

Recently renamed “Grand Casino” – CPN operates several other businesses in the area with the FireLake name, but none so deserving of the epic appellation – the facility’s 125,000 square feet already house over 1,800 Vegas-style games from slot machines to blackjack tables, as well as three restaurants.

Now management is raising its investment by constructing an opulent hotel on-site, a 14-story tower in the casino’s architectural style that will contain 262 guest suites, meeting rooms, a spa and fitness center and an outdoor pool, plus a new entertainment theater that will seat over 2,500 spectators.  The all-new Grand Casino Resort is the result of a collaboration with OKC-based architectural firm GSB, Inc., whose projects have included the Myriad Gardens Crystal Bridge Conservatory and resorts for Disney and Ritz-Carlton, and is built under the management of Flintco, experts whose resume includes Chesapeake Arena, the Skirvin Hilton Hotel and the Devon Energy headquarters. The Grand Hotel is expected to open in early 2013.

The gaming and good times are still superb at the casino just off I-40, and the name change doesn’t mean that the fire has gone out… just that the future of this Oklahoma entertainment landmark looks grander than ever.