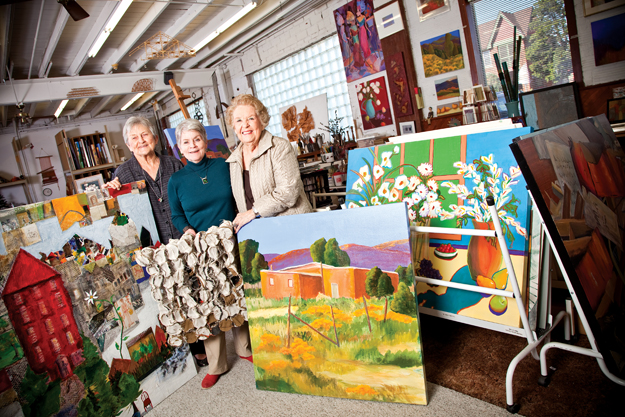 Nearly 20 years ago, six talented women decided to start an art studio in the Paseo Arts District. An old gas station, formerly owned by Anderson Prichard Oil Company, appeared to be just the right place to fuel their creative collective. The six artists rented the space for six years before forming an LLC and purchasing the property. Thus, Studio Six was established at 3021 Paseo, where it has become a pillar of the art community.

They began as friends before they became partners in art. Donna Berryhill, Winnie Hawkins, B.J. White, Regina Murphy, Mary Nickell and Sue Moss Sullivan collaborated on a select few major art projects in the early days of Studio Six and also exhibited as a group in major exhibitions, including two shows at the Oklahoma State Capitol. Most of their work, however, has always remained distinctly independent.

“Our styles are so different that we don’t compete on any level,” Murphy says. “We help each other when possible, though. Mary is really good at titling my work,” she adds with a chuckle.

Over the past 30 years, Murphy has explored various artistic genres, but painting is her passion. She creates colorfully vivid landscapes in an experimental blend of abstraction and realism.

“When I paint a landscape my aim is to show the viewer my vision of a special place with lively color, lyrical shapes and bold lines, not necessarily what a casual tourist might see,” Murphy says. “My goal is to produce a painting that is not a ‘postcard’ view but will intrigue the viewer and prolong interest.”

The environment appears as a common theme among the artists’ work. Like Murphy, Sue Moss Sullivan has also been working for 30 years as an artist. Sullivan’s work, however, emerges primarily from paper and textiles, which form mixed media pieces often reflecting urban landscape.

“The Oklahoma landscapes that I see… reflect my vision of the architecture, expanse and eventual decay of cities and structures,” Sullivan says. “The pieces are viewed at ‘grade’ perspective or from above, as a map or aerial view. The materials – papers, rust, metal, gold and silver leaf – are materials that essentially come from earth and will return.”

Sullivan’s creative repurposing of used coffee filters in her paper works shares an unexpectedly sophisticated relationship with her other pieces formed in highly stylized and textured Japanese paper. Her fiber works express a similar tactile sensibility. Sullivan has been weaving since before she moved to Oklahoma City from St. Louis in 1976, where she had been a high school English teacher. Since becoming a founding member of Studio Six, Sullivan has been exploring mixed media work with fiber, paper and other materials, but all of her work remains informed by basic weaving techniques.

“Moving to the studio space allowed me the opportunity to expand into sculpture work,” Sullivan says. “I became intrigued by how fiber could be combined with materials, such as wire, to create three-dimensional sculpture.”

Sullivan regularly acquires materials from her partners in the studio to create her sculptural pieces. She also often shares materials, which are repurposed and reimagined by her artistic counterparts. Mary Nickell, for instance, incorporates wooden spools left over from Sullivan’s wax linen into mixed media assemblages. Nickell is known for creatively integrating unsuspecting materiality in her sculptural work, in which a collection of used hearing aid batteries may be carefully crafted into a silver mosaic collage. Ever environmentally mindful, Nickell has even been known to incorporate leftover orange peels into her work after pausing in the studio for a refreshing fruit snack.

“When you put your art in front of people, you are baring your soul.”
– Mary Nickell

Although Nickell experiments in three-dimensional work, she has primarily been working in paint since 1984. After her children “flew the coop,” Nickell began taking workshops in watercolor before exploring acrylic and oil paints. She resisted taking too many art classes to avoid being overly influenced by techniques, instead relying on her instincts to maintain originality and spontaneity in her work.

“It took a lot of intestinal fortitude to take off on my own,” Nickell says. “When you put your art in front of people, you are baring your soul. You are risking failure and criticism, but you just have to do it.”

Nickell says her goal in art is to reject the trite and create work that challenges her. As a result, her work is inspired by her travels as well as by everyday life. Her recent trip to New York resulted in impressionistic pieces inspired by the architecture. After her visit to Cezanne’s studio in southern France last year, Nickell’s husband built an eight-foot-tall easel for her, inspired by the one Cezanne used in his studio.

“I don’t paint for money,” Nickell says. “I paint because it fulfills me and satisfies a need to be creative and expressive. I look forward to coming to the studio about four days a week to work, and I never know what I am going to paint when I begin.”

Over the years, Studio Six has survived the loss of three members of the original group. B.J. White left just a few months after the studio opened to pursue a Master of Fine Art at OU. Fellow founder Donna Berryhill passed away in 1997, and Winnie Hawkins passed away this past July. The studio plans to memorialize Hawkins through a fund established in the Paseo Arts Association.

Although the studio maintains the name Studio Six, the artists now number only three – and they plan to keep it that way. The women continue to showcase new work and also feature guest artists every month during Paseo’s First Friday Gallery Walk. December’s guest artists are Rick and Tracy Bewley, a dynamic husband-and-wife team working in glass. Murphy will also have a show of her new work this month at JRB Art at the Elms, just down the street from Studio Six at the southern tip of the Paseo Arts District.

Nickell suggests that the common thread that holds the artists in Studio Six together is that the women respect one another’s time and space and give each other a chance to be creative. The artistic theme that seems to bind the group, however, appears to continue to be rooted in nature.

“Life is so transient,” Murphy says. “We are so vulnerable; but the earth endures, although gouged and scarred by time and the elements. Perhaps that is why I am awed by its grandeur and inspired by its beauty.”