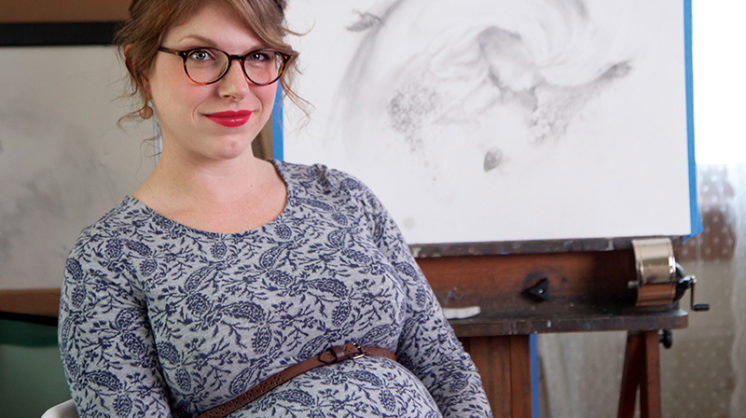 All children are artists, but some children grow up to become artists. Haley Prestifilippo of Norman has seen home video of herself when she was as young as 4 years old saying that would be her future.

While growing up in Atlanta, she also remembers her brother bringing home Ranger Rick magazines, a publication of the National Wildlife Federation. The pages were full of animals of various kinds, and she used them as her first real models.

“I remember drawing the birds and realizing that they looked like the birds in the magazine,” she says.

“My parents weren’t artists, but my mom’s side of the family was definitely artistic.”

Those early drawings were in pencil – a medium that Prestifilippo has mastered, if her recent work is any indication. She was a featured artist at this year’s Momentum, the Oklahoma Visual Arts Coalition’s annual curated exhibit for artists 30 and younger. Included with her display pieces, all of which were graphite on paper, was an interactive work called “What Could I” that the audience was allowed to alter … actually, they were asked to erase pieces of it.

Why would an artist create a piece just to see it destroyed, even if only slowly, one erasure at a time? To understand the exercise means to get at what Prestifilippo is trying to convey in much of her work. It’s even included in her artist statement: reconciling the space between growth and deterioration.

“The inspiration for that theme comes from the idea that everything is enmeshed,” she says. “There is a continuum of life and death, and each feeds the other. Anything decaying, and in my work it’s often dead animals, will feed something else that is living and growing.”

Thinking about art philosophically as she does is likely a result of her formalized training. She earned a BFA at Notre Dame and a MA in studio art at Eastern Illinois University. Whatever her philosophy, her training and skill are obvious. Prestifilippo’s detail and drawings are exquisite, and it sets her apart as an artist. That’s partly due to her manner of attracting viewers.

“I like to create something that is beautiful at a glance, when you see the whole thing,” she says. “But when someone walks closer, they will see the details emerge. It pulls them in. It’s the kind of art I’m attracted to as a viewer, too.” 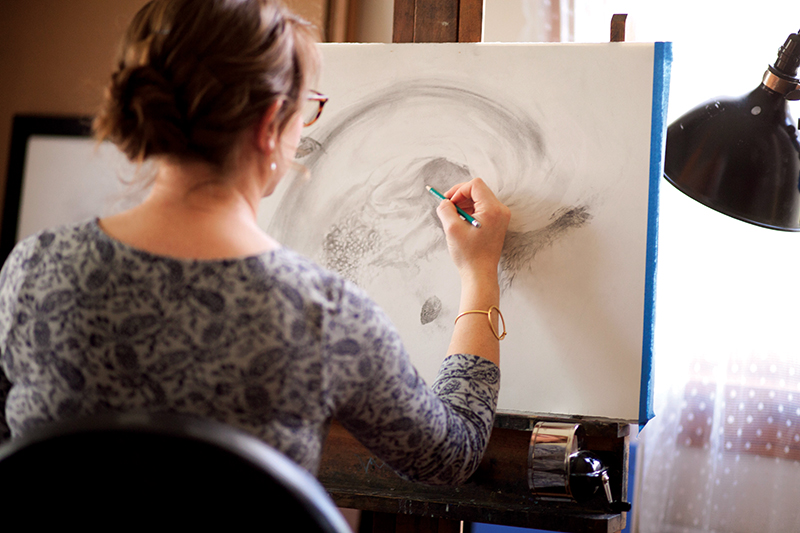 The attention to detail is present in her both as creator and observer. She talks about enjoying the layers of meaning or sound in literature and music, as well – the layering that makes beauty more intricate, more compelling and, for her, more interesting. How else would an artist stay engaged with a piece of work that takes up to 200-300 hours to complete, depending on size? That’s the time she estimates it takes to complete the various sized drawings.

Step close to her work and you will see the rich texture, remarkable detail, the use of shading – chiaroscuro creates depth in these monochromatic pieces – and the way the animals and organic shapes blend into each other, an effect meant to echo Prestifilippo’s idea that there is a constant oscillation between the moment of death and moment of life, of decay and creation.

Smaller versions of her work, “Tiny Frames,” were recently on display at Science Museum Oklahoma in a joint installation with her husband, OU art professor Jason Cytacki.

The drawings were bounded by small frames she found at a Salvation Army store. She chose them because they reminded her of the Dutch Baroque, one of the periods that influenced her most with its detailed drawings and gilded frames, both earmarks of the period. Those ornate frames seem to extend her drawings by mimicking the rolling, asymmetric edges of the art.

Prestifilippo said she is sticking with drawing for now, but she has plans to start experimenting with more color. She had a gouache and graphite piece at 12 X 12 last year (OVAC’s annual fundraiser) called “You Can’t Steal It If I Give It To You,” which was her first foray into the medium.

She may even go back to painting, a medium she focused on at Notre Dame, and on a larger scale in grad school. As for being an artist couple, she said she and Cytacki have talked about collaborating, but nothing definite is in the works.

Her studio is in her home and not open to the public, but will be in the Norman Arts Council Open Studios tour this month. And her future as an artist continues.