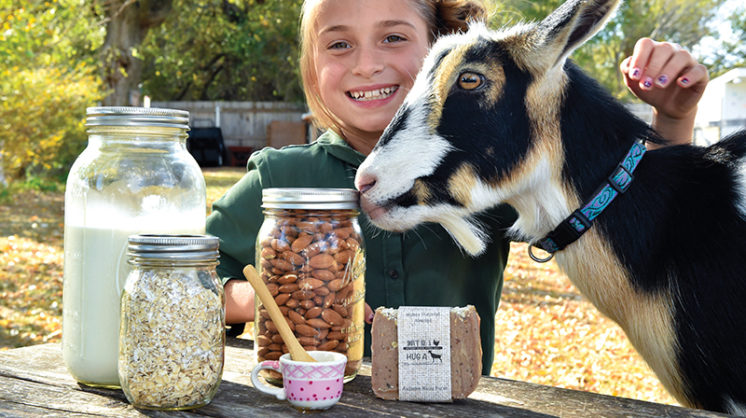 Gift giving can be a daunting endeavor. If you’re a person who longs to touch the recipient’s heart, then there are all sorts of considerations to take into account about individual preferences and tastes. If you’re a conscientious consumer who wants to buy local, then there is another set of concerns to put on the list. This can all add up to making your holiday shopping a potential drag, instead of the fun element of the seasonal celebration it can be.

This collection of local artisans is by no means exhaustive, but it’s intended to be a representation of the sort of diversity in our community’s marketplace. From the fanciful to the practical, there are a variety of options here that can cover a wide range of gift-giving needs.

Forget Grease. At the family-owned Autumn Blaze Farm, “Goat” is the word. Goat milk is a key ingredient in the handmade soaps the farm produces – an amazing array of products that includes adorable cupcake-shaped soap that looks and smells good enough to eat – and owner Monica Schmidt is happy to tell anyone who will listen about the magical properties of the stuff produced by the family’s Nigerian Dwarf goats. “Goat milk has selenium and vitamin A and D in it,” Schmidt relates. “It’s very nourishing for your skin.” Lotion, lip balm, bath bombs: Soap isn’t the only product the farm produces, and the variety of scents available make their offerings appealing across age and gender lines. (They even have simple soap for the sensitive among us that’s made out of oil and goat milk, nothing else).

No matter how paperless our society becomes, there will always be the need for a card or letter that one can hold. If the card or letter is written on an exquisitely crafted piece of stationery, then that only makes it better. The “frameworthy” part of the name of Tara Forth’s Frameworthy Designs is not merely a buzzword; her graphite and watercolor creations are truly hang-on-the-wall level art. Not only that, they’re imbued with a spunky positivity and realism that takes you beyond the saccharine-sweet world of Hallmark cards and lets you express genuine feelings without rolling your eyes. (If you’ve ever spent an hour poring over Mother’s Day cards thinking that you couldn’t possibly sign any of their over-the-top sentiments with a clear conscience, you might appreciate Forth’s design that reads, simply, “I Love You, Mom.”) 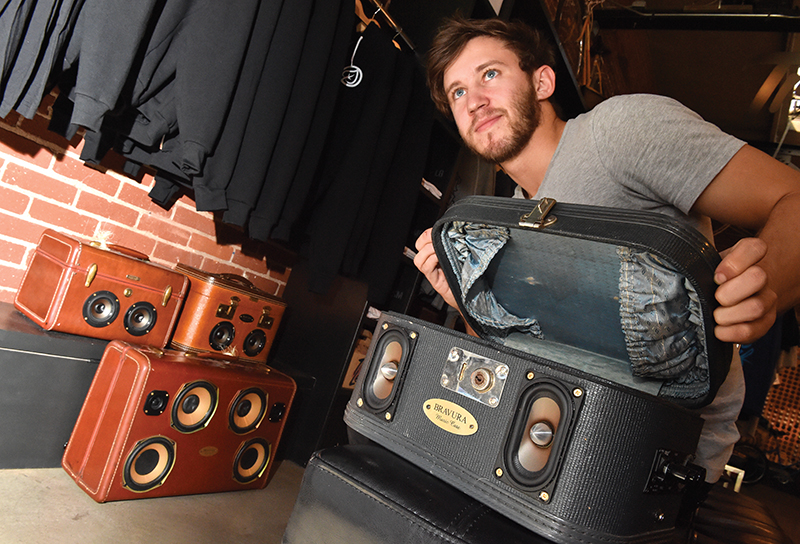 Cole Kroutil had some old suitcases lying around their house, and wanted a way to use them that was both decorative and functional. After researching ideas and seeing suitcases used as housing for sound systems, he made his first case through trial and error, and was so pleased with the results (and the reactions of friends), he decided to make it into a business. Bravura cases use high quality speakers and lithium ion batteries that are guaranteed to last 15 hours, but generally endure 24, making them perfect party soundtrack providers. Some are wired to play FM radio, but most designs are simply used for playing music from a personal device (iPad, iPhone, mp3 players and the like). Kroutil tries to be considerate of the limited market in Oklahoma by keeping the cases reasonably priced, and insists that his main priority isn’t to get rich, but just to share the love of cool music cases with fellow Okies. “I want anyone to be able to buy them,” Kroutil says, “not just someone who’s wealthy.”

Every craft fair and street festival has an overabundance of handmade jewelry vendors. Bracelets and necklaces beaded or crafted by hand always have a nostalgic feel, but rarely are they as beautifully elegant as the designs put together by Emily Pierson, owner of Little Rose Jewelry. Emily’s mother passed away in 2013, and the pieces that Pierson creates are both a tribute and a legacy. “She made jewelry during my childhood,” Pierson says. “She had her own business called Trinkets. As a way of dealing with my grief after her death, I took a metalsmithing class. When she passed away, I got all of her beads and everything else that she had … and it’s been a really powerful way for me to work through my grief and honor my mom.” Pierson’s artistic eye flawlessly pairs unique design and materials such as turquoise, Baltic amber and Radraksha seeds, giving her pieces both aesthetic appeal and enduring quality. 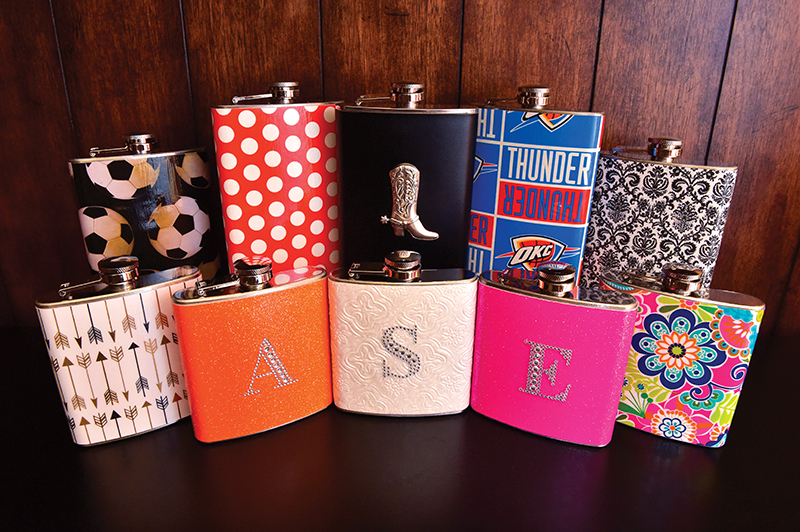 When daughter Kelsey wanted to give a friend turning 21 a flask as a gift, Kim Ryan couldn’t find any that were feminine. So, she made one. The idea that there could be a market for such a thing led her to make more, and sure enough, the people responded. From the bedazzled to the bedlam-themed (OU and OSU designs are available, of course), Ryan and her daughter do a brisk business customizing flasks for everything from bridesmaids gifts to everyday designs that will look right at home in a Vera Bradley bag. The duo also sells tiny funnels, to make filling those swanky swig-suppliers a breeze.

Darci Lenker’s offbeat stuffed toys are a surefire kid pleaser, but don’t limit them to children; there’s something about those crazily colorful raccoons, foxes and lizards that’s compelling enough to move adults to want to cuddle them, and they make great conversation pieces. Her creations can be found in the Firehouse Art Center and Dreamer Concepts in Norman, The Okay See on Film Row in OKC and Studio 11 in Emporia, Kansas, but Lenker also appears at other locales and several festivals around the metro, and she has an Etsy shop. 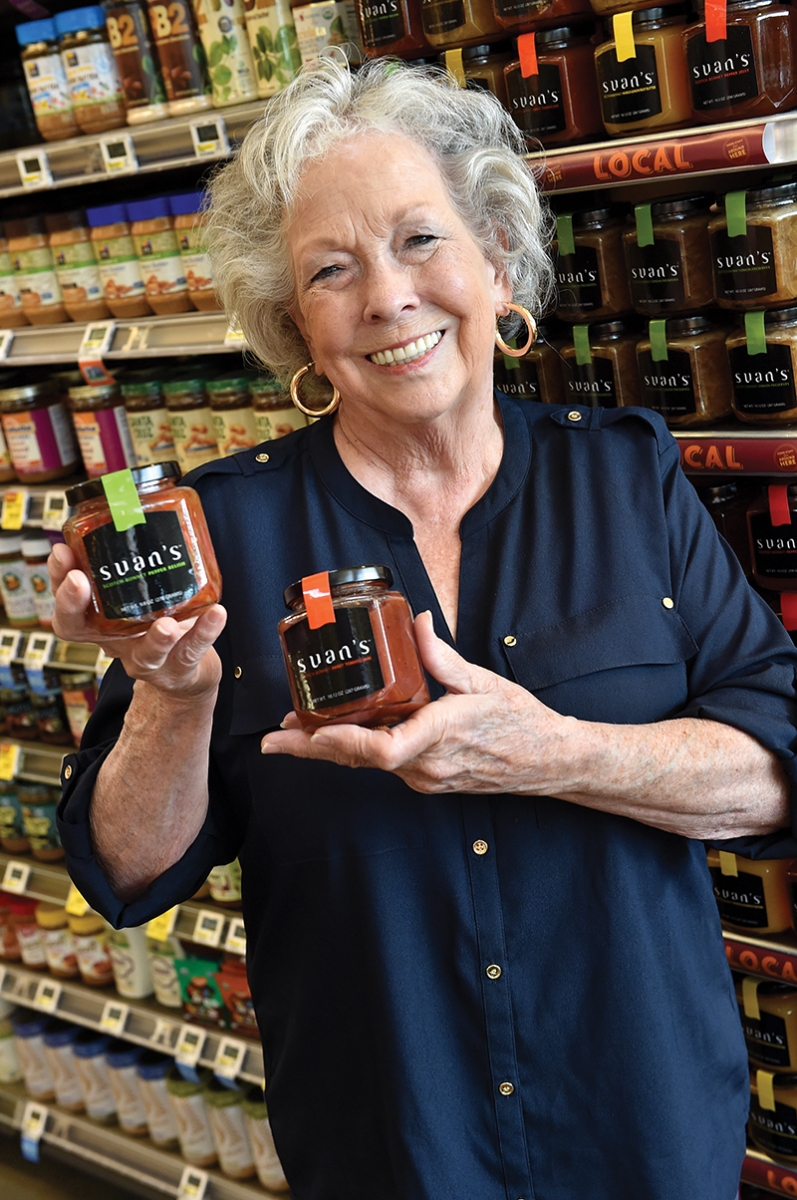 After being introduced to Scotch Bonnet peppers in Jamaica, Suan Grant’s subsequent passion for them and her creative nature led to an experiment using them in jelly. The delicious result led to Suan building a Scotch Bonnet recipe repertoire, and years of hearing “you should sell this” from friends and family eventually culminated in her doing just that. Since 2009, Suan has shared the wonder of the Scotch Bonnet with fellow fans, and created new levels of appreciation in others. While she and her artist daughter Robin Wolf can be found at various shows and markets across the state, you can also order her amazing condiments online. Fans of spice will enjoy the moderate heat left in some of the jellies, but don’t turn down a chance to try them if you’re afraid of the burn one would normally expect from a pepper variety that can be 10 times hotter than a jalapeno; the sweetness of the jelly is a perfect foil and actually allows the Scotch Bonnet’s glorious flavor to be experienced.

If a great gift idea happens to entail a trip to a winery and several tastings to get just the right choice, that wouldn’t be so bad, would it? Canadian River Vineyards & Winery not only produces several Made in Oklahoma vintages – including Oklahoma Riesling and their celebrated Chocolate Drop – they also have plenty of wine-themed accoutrements to go along with them. Red Solo cup and Mason jar wineglasses allow Okies to enjoy our state’s relatively new status as a legitimate wine source, while still giving a nod to our roots, and coasters and T-shirts for wine enthusiasts round out the list of potential gifts. 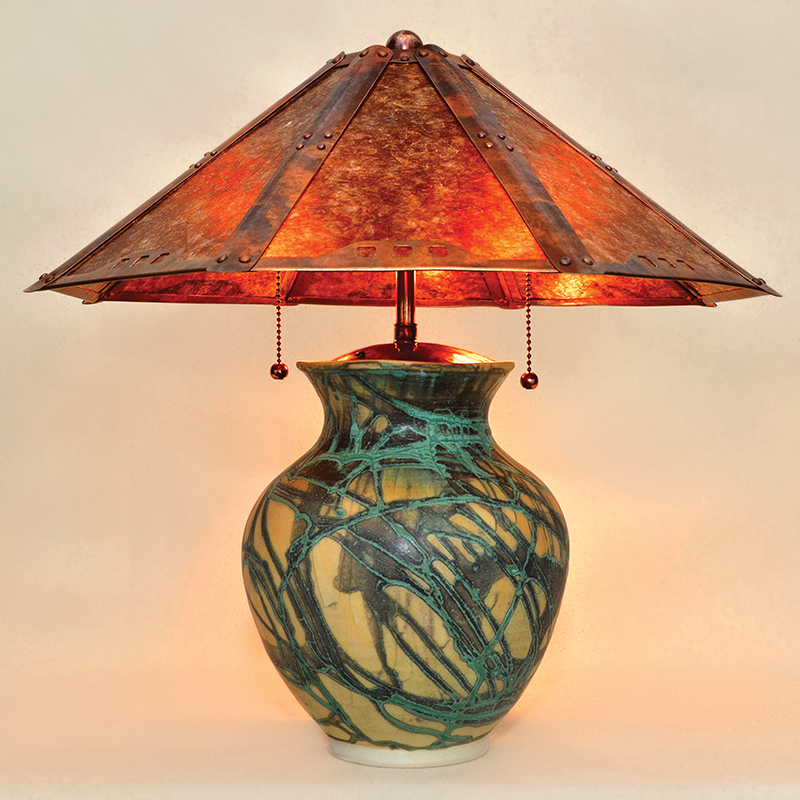 Artist Robin Wolf was featured in the September 2012 issue of Slice for her beautiful hand-crafted stoneware pottery. Since, she’s expanded into working with copper and mica, fashioning lighting fixtures that will not only illuminate your home, but provide artistic depth to it, as well. (Pieces such as mailboxes are available, too; no one ever said necessary implements need to be mundane). All of Wolf’s copper work, from cutting to tempering, to forming and waxing, is done by hand. “I learned basic sheet metal skills many years ago as the co-owner of a small heating and air business where we crafted our own ductwork,” Wolf says. “I was already crafting copper lids for my pottery, so I knew that I had the basic set of skills needed to create my own patterns and designs for copper and mica lamp shades and lighting fixtures.” Wolf’s fire patina process gives her work its unique coloration, making her items true one-of-a-kind pieces.

Although Karli Gribble originally hails from Texas, after eight years in Oklahoma, she’s finally calling it home. It’s a choice reflected in some of the designs she creates through her reclaimed material home décor business, Reclaim to Fame. Oklahoma-shaped wall hangings, either plain or emblazoned with lightning bolts or chevrons, constitute some of the individualistic pieces Gribble constructs from used fencing and other repurposed wood. Whether your tastes – or the tastes of your intended gift recipient – run to the eclectic (a giraffe with the message “Stand Tall”), or purposeful (tiny plant holders hooked onto small boards for easy wall display and watering), chances are there’s something here that will strike your fancy. Touches such as battery-powered LED lighting on the signs (meaning cord-free display) coupled with Gribble’s infectious optimism (shared through decrees like “Be Brave – Awesome You!”) make for some happy home décor.

The need for cake at any given celebration is followed closely by the need for that cake to have some decorative element acknowledging said occasion. Thanks to Hannah Bergman, there’s now a solution other than professional help from a bakery, or a mad scramble to the grocery store for candles and dry candy bits to accomplish that. Bergman’s Three Eleven Designs offers a selection of reusable cake toppers (made from laser cut acrylic), which can be used for events that range from the specific to generic. Exclamations such as “Woo Hoo,” “Celebrate,” “Forever” and “Happy Birthday” are available, as are custom options that allow you to get every member of the family their own personalized topper, say, for the beginning of a new tradition. Three Eleven also has a number of paper goods – weekly lists, notepads, stationery, invitations – that can also be customized, and just like the cake toppers, are both practical and pleasing to the eye.

If there’s an edgy friend/niece/child on your list who defies most gift-giving categories, there may be a quirky tchotchke for them at Amelie’s Anomalies. Local artist Abby Storie crafts jewelry and art out of doll parts, embellished My Little Ponies, and a variety of other items for a style statement that is truly unique. Storie’s pieces are all handmade, and created using several mediums, including natural and found objects. Plastic eyeballs, pictures of three-eyed kittens: Storie’s gift is in finding the wondrous and beautiful in the strange, and she does it magnificently. These are the gifts for people who are hard to get – and get things for.