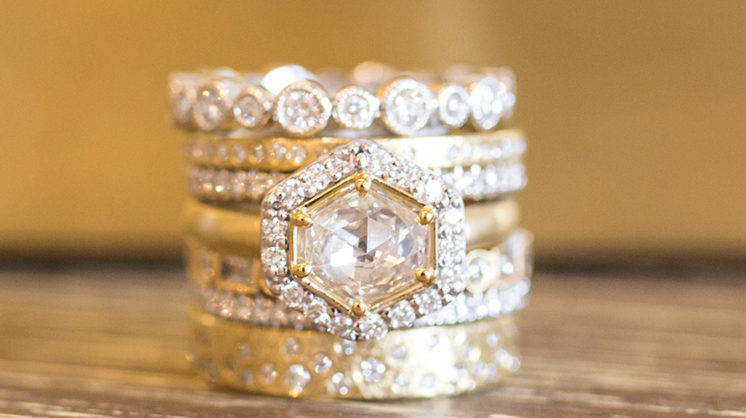 Wedding rings have come a long way from the days when a simple band of yellow gold was the done thing – for both the bride and groom. For many couples, it was a brief thought amid the hectic and busy organization of a wedding – in the days before wedding planners – so keeping it simple was generally the preferable option.

The gold band is still popular, and has been the wedding ring of choice for more than 300 years … but as with most traditions, it has evolved over time. Brides now have many options, with fewer preconceptions in either style or metal.

According to Tim Lewis, co-owner of Lewis Jewelers in Moore, brides are seeking a more eclectic look when choosing a band, and the stackable ring is seeing increased demand. Brides have a choice of design and colors, and can augment the adornment or even swap out elements to tie in with a special outfit.

The stackable ring has been around for many years, but it seems style icon Audrey Hepburn set the trend in 1954 when first husband Mel Ferrer presented her with two wedding bands – one rose gold and one white gold – to complement the diamond eternity ring he had given her when he proposed.

When it comes to the metal of choice, Lewis said white gold is still the most popular choice, with rose gold accounting for only 5 to 10 percent of their sales. “Each metal goes through a 25-year (popularity) cycle,” he explains. “We’re currently 15-18 years into the white gold cycle, which followed the yellow gold trend.”

Mitchell Clark, executive vice president of BC Clark, said that white gold is in higher demand at their stores, but yellow gold and rose gold are also making a comeback.

Naifeh Fine Jewelry owner and designer Valerie Naifeh also has seen a revival in yellow gold and rose gold bands, and said it’s more to do with brides wanting a more distinctive style; opting for wedding bands that can stand their own ground and don’t just serve to complement the engagement ring.

“With more women traveling, they often want to leave their valuable diamond engagement ring somewhere safe at home, and so need their wedding band to look good on its own,” she says. “More brides are going for a simple, traditional engagement ring and then choosing a more distinctive wedding band.” 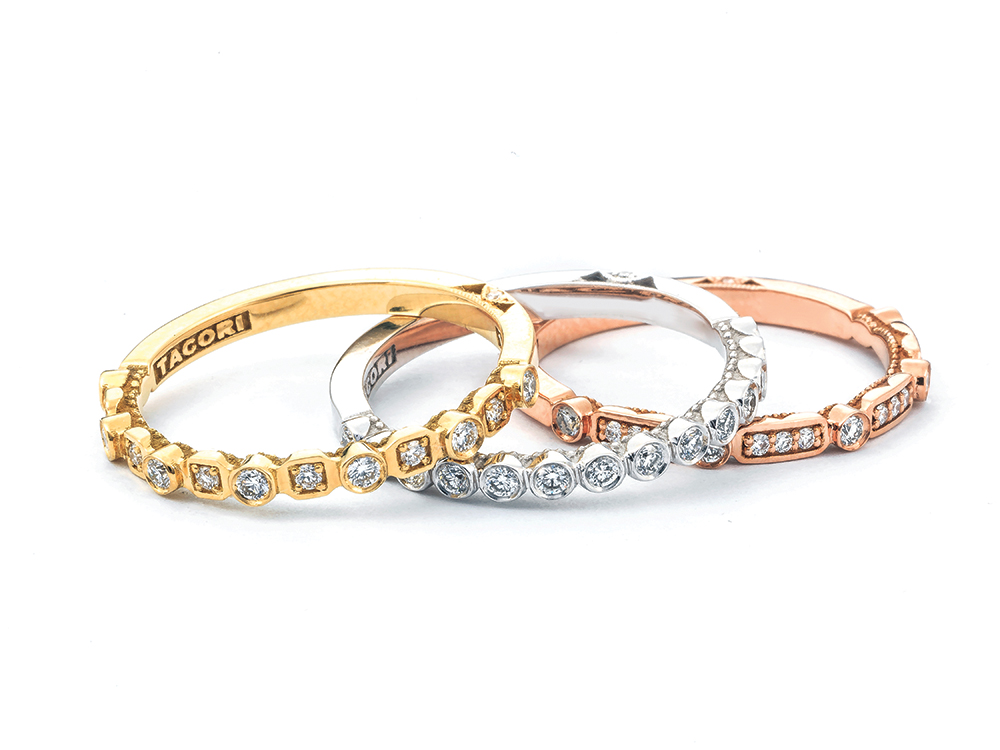 Nelson Lopez, general manager at Diamonds Direct in OKC, said designs in stackable rings were evolving rapidly, with some of the recent styles including different shaped stones, such as the marquise, as well as wedding rings with a seamless line of diamonds so no metal can be seen – creating a band with more sparkle.

Of the recent influx of choice, Lopez adds, “What certain manufacturers have done is bring designer rings into the mainstream market.” No longer are these distinctive wedding band styles available solely to the rich and famous, but to all brides – and that’s welcome news for all those getting ready to tie the knot in style.

For men, wearing a wedding ring is a relatively new concept, especially considering that the history of women’s wedding bands can be traced back to ancient Egypt, when they were made with braided reeds and hemp. Men didn’t start wearing wedding bands until the 1940s, when World War II soldiers wanted to remember the loved ones they had left behind. Since then, men have requested all manner of different ring materials as a symbol of their union, from tungsten carbide to rubber … and even tattoos.

Mitchell Clark of BC Clark says “thankfully” he hasn’t seen much of an impact of the wedding ring tattoo trend in the metro.

“For men, we are seeing a rise in demand for bands made of different materials that offer a more masculine appearance. Metals such as tungsten carbide, stainless steel and titanium are becoming more in demand,” he adds.

Clark advised to avoid titanium; although it is durable, the metal is harder to cut in an emergency.

Men traditionally have worn plain metal bands, since the majority worked with their hands – but as this has changed over time, engravings can be made on the metal without the fear of getting dirt trapped.

Calyn Jump, sales manager at Naifeh Fine Jewelry, said some of the most interesting design requests they had received were fingerprint rings, when a cast was made of the groom’s print in wax and then incorporated into the design.

“We still get a lot of requests for traditional rings, as many men see them as something they can pass down as a family heirloom,” Jump adds.

Today, requests for rings with interesting inlays of wood grain or carbon are also on the rise, showing a demand for more individual wedding bands for men.

More grooms also are opting for rings made of something other than precious metals. Some of the latest trends for men include titanium, cobalt and even black rings, which Tim Lewis, from Lewis Jewelers, believes will be a “short-lived trend.”