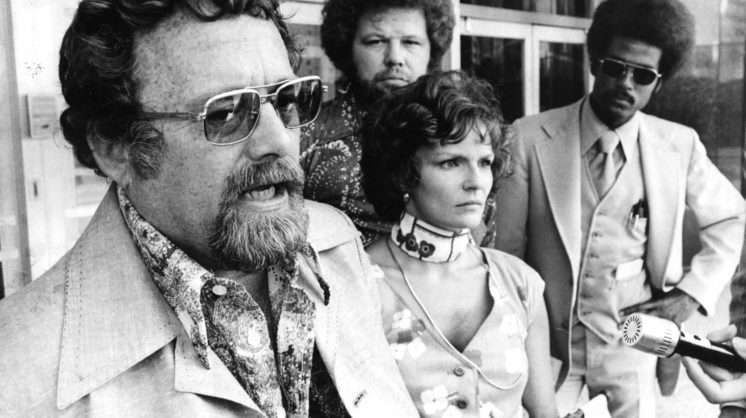 Tracy Coy Poe, aka Pody Poe, with his wife, Barbara, at his side, talks to reporters outside the federal courthouse building on Thursday, 6/19/1975.

For Oklahomans of a certain age, saying “I knew Pody Poe” is a little like claiming they were at Woodstock in 1969: If it were true in all cases, his casino would have been the size of Devon Tower.

Tracy Coy “Pody” Poe was not the first person to run an illegal gambling operation in Oklahoma, but he was easily the most notorious and colorful character in that scene. Poe ran an underground casino operation out of the garage behind his Nichols Hills home at 1804 Guilford Lane for 18 years, and was a central figure in Oklahoma City gambling for the last half of the 20th century.

“He was such a character, right? In society and everything,” said Traci Poe Boyd, his daughter who was convicted in the 1996 gambling bust that sent Boyd, her brother James “Jimmy” Poe their father and two other men to prison. “He loved his picture being taken, and he loved the publicity.” 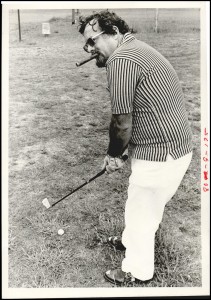 If Pody often felt invincible — and as Boyd said, his large ego made sure of it — a legendary episode from his early life provided the origin story. In 1934, Pody’s parents, songwriter and film producer Coy Poe and Dorothy Minter Poe, were driving near Ardmore when his 2-year-old son was bounced from the car. According to a 2005 profile by Steve Lackmeyer in The Oklahoman, Pody was unscathed, and he frequently referred to the accident as his “second lucky break” after being born healthy.

When his parents split, Pody spent his grade school years with his father in Los Angeles, where Coy Poe produced B-movies, wrote songs like “The Object of My Affection” and “You’re My Strongest Weakness,” and managed a fellow Oklahoman, singer, actor and banjoist Pinky Tomlin. As a child, Pody tagged along while his father palled around with celebrities like Bing Crosby and Bob Hope.

But by the late 1940s, well into his teens, Pody was hanging out in the various bookie halls that thrived in downtown Oklahoma City, like Herman Vestal’s Place at 225 W Sheridan and especially the Central Club, 319 Robert S. Kerr, now the site of the Metro Parking Garage across the street from the Oklahoma County Courthouse. The Central Club was a pool hall, domino parlor and beanery where Poe, after long days caddying at the Oklahoma City Golf and Country Club, would hang out and watch master pool hustlers like Rudolf Wanderone, aka “Minnesota Fats.”

In 1953, after serving in the Air National Guard, Poe enrolled at the University of Oklahoma, where he started taking sports bets. He was soon busted and lost his scholarships. While he tried his hand at an honest living by selling insurance for a decade, he saw sports betting as a more honest profession and left the insurance business behind in 1964. By the mid-1960s, Poe apprenticed under Leroy Dale Hines, a Tulsa bookmaker known as “The Bear” who had connections to New Orleans mafia boss Carlos Marcello. Over the course of the next few decades, Poe and Hines became the most successful bookies in Oklahoma, working together, carving out territories and running backroom gambling and sports betting.

“Well, I mean, my whole life, there was always a poker game or something going around,” Boyd said.

By 1967, authorities were onto 35-year-old Poe’s operation. Starting on June 14, 1967, Oklahoma City Police Department busted him five times that year, sometimes twice during the same week, with the El Reno Police Department arresting him in November for running a public poker game. Authorities continued to dog Poe through the end of the decade when he connected with his friend Lester “Benny” Binion, the longtime Dallas gambling boss who skipped town to Las Vegas in the 1950s to start Binion’s Horseshoe Casino, home of the World Series of Poker.

Boyd said that in the early 1970s, Poe was running junkets from Oklahoma City to Vegas, bringing high rollers to the tables at Binion’s Horseshoe and Steve Wynn’s Golden Nugget. Then in her early teens, Boyd would travel with him, but she said there were limits to how much time she wanted to spend around his operations. With younger siblings at home, including Boyd’s little sister Chance, she said they were never gone for more than 30 days at a time before they settled in a 3,200 square-foot home in Nichols Hills.

After his junket period was over, Pody set up shop behind that home in a converted garage called The Little House. Oilmen flush with cash and celebrities like WKY personality and “Dannysday” host Danny Williams would descend on the place as Dixieland jazz bands entertained the high rollers and easy marks while Pody, wearing one of his smartest leisure suits, watched the tables from behind a two-way mirror.

Boyd described The Little House as smoky and full of people, that it was similar to the bar in Paul Verhoeven’s original version of Total Recall with Arnold Schwarzenegger, but with far fewer martians. Guests would throng to the place, often parking at nearby Christ the King School and walking to the biggest party in town.

“There were many characters,” she said. “It had shingles all on the inside walls. And that helped to reduce noise. Oh, and it was always very, very smoky. It was thick smoke. There was a fancy bathroom with a sauna. And, you know, back in its heyday, it was busy all the time. And it opened, you know, at 10 at night and ran until like 5 in the morning.”

Visitors would ring a doorbell mounted to a tree and then would enter a fenced area, where guards would check them out before letting them inside. Pody also had elaborate electronic security, including a closed-circuit television which police discovered when they raided his operation in 1979 and during a citywide sting on May 18, 1984, for which Pody was not charged.

In 1987, Pody was arrested for illegal bookmaking and sentenced to 18 months in prison, but he was released after three months for good behavior. While Pody’s attorneys told U.S. District Judge Lee Roy West that he was fully rehabilitated and would soon move to Texas to sell used trucks, that is not what Pody had in store. As soon as possible, he went back to business as usual at The Little House.

Both Boyd and her sister, Chance Poe, said that Pody was a brilliant man who could have been a great attorney or anything else. But Pody wanted to be a gambler and a golfer, and he was great at both. Even in his old age, he would take bets on the greens and leave his opponent poorer for the experience.

“I could hear guys at the golf course telling somebody else, ‘I told you not to play that old man,’” Boyd said.

The game continued at The Little House for nearly two decades. Libby Payne lived on Elmhurst Avenue, directly behind The Little House. She recalled police showing up to pull disorderly drunks out of Pody’s establishment in the middle of the night, and there were many times before Pody’s final bust that helicopters would buzz the neighborhood. But she and her husband, Morton Payne, never had problems with the man himself.

“He used to walk up and down the street; you’d see him walking past our house,” Payne said. “Big old fat guy. He had a big ol’ cigar in his mouth, walking around. Morton once went over and spoke to him about splitting the cost of the fence and he was more than happy to do that, couldn’t have been nicer. And he had two children that my children used to play with when they were little.”

The end came into view starting on Aug. 9, 1995, when OKCPD Vice Sgt. Anthony Gracey, who was brought in because Nichols Hills police were concerned that their officers would be recognized, convinced a regular player at Pody’s place to vouch for him. Boyd, who was working the door that day, recognized the regular and let them in.

Gracey gambled at The Little House until Jan. 23, 1996, when Internal Revenue Service investigators and OKCPD served a warrant on Pody’s establishment.

“The FBI were in our backyard,” Payne said.

According to a 1997 report by The Oklahoman’s John Parker, more than 700 sealed decks of cards and over $9,000 in cash was recovered from the scene. Pody served three years of his sentence at Fort Worth Medical Center in Texas, where he received treatment for prostate cancer and diabetes.

Chance Poe said that Pody was still his old self, even in prison and afterward, when he wore an ankle bracelet until his sentence was commuted to time served in 2003. He lost his earnings in the raid and was forced to live in a small apartment, but he never stopped being Pody Poe.

“If my dad were still alive today, I’m sure he would be super rich with something in the tech world,” she said. “He was very, very smart about things changing and he was never opposed to change.”

Pody Poe died Nov. 1, 2006, and his friend Danny Williams announced his death to the press. At the time, Williams told The Oklahoman, “He was a hell of a guy, you know, regardless of what people say.” But few people other than judges, district attorneys and police officers had bad things to say about him. His daughters describe Pody as a great father who gave them the tools they needed to make it in life.

“The thing is, he knew what he was doing was illegal, and he was very clever about how to negotiate the system,” said Chance Poe, who is now working as a personal trainer, chef and yogi in New Mexico. “And he made some mistakes that got him in jail. He believed that he would not be prosecuted because of his ego. He knew the risks that he was taking, but he was also living his best life, and he was, you know, taking risks. Because that’s how he was providing for his family, and he was doing what he loved to do.

“Not a day goes by that I don’t miss my dad,” she said. “He was the freaking coolest.”