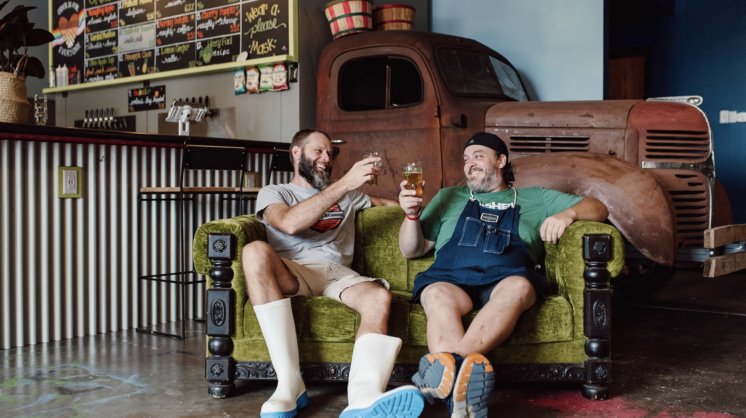 As soon as Tim King can get a copy of Disney’s “Johnny Appleseed” on vinyl, he will have it playing overhead at OK Cider Co in Film Row. The cidery opened in July in the old Plant Shoppe facility, and a mural of Johnny Appleseed (masked as of press time) by Meghan Buchanan adorns the left wall as you enter. He’s an appropriate mascot for a cidery, and the overall aesthetic – rusted-out truck, rough woods, thrift-store purchases, rustic bar – speaks to a warm comfort that’s somehow located in our pasts.

King and partner LukE (yes, the E is capital on purpose) Hadsall started making cider in 2014. “I’d just moved back to Oklahoma, and being gluten intolerant, I looked for a cider I liked,” King says. “I didn’t find one, so I decided to make my own.” 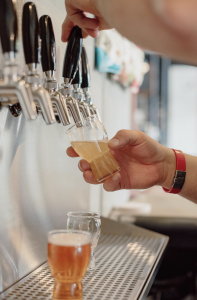 The pair debuted their ciders at the Oklahoma Craft Beer Festival in 2017, to a chorus of praise from the assembled beer geeks. “We like to say our cider is beer-influenced,” King says. That’s not just talk. The ciders have bases like Belgian and saison, and more than a few are hoppy. Still, the beer focus doesn’t hurt the cider-iness of the finished product. The Naughty Apple, done in a traditional English style, is still a burst of refreshing, crisp apple, and the Cherry Poppin is perfectly tart with a blend of Naughty Apple and cherry juice added after fermentation.

In fact, all the ciders are on the dry side – with sugar kept to five grams or less per 12-ounce serving – and what sugar there is Hadsall adds after fermentation. Juice is sourced from the same place for every batch, chosen for flavor and consistency rather than species of apples, and isolated yeast strains build the flavor profile of the desired style. The technical precision is impressive, and the ciders, even the ones that sound weird, are delicious. 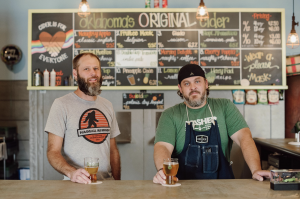 “It was LukE’s idea,” King says. He pours samples, and we all agree that it’s weirdly delicious, as in “can we have more” delicious.

“I used an Ethiopian coffee to get the profile I wanted, and we were very pleased with how it turned out,” Hadsall says.

A gross understatement. They’re thrilled, and rightly so. The experimentation is all over the menu board: pineapple, hazy IPA style, peaches done in a still rather than sparkling style, lemon-ginger, chocolate and cherry, and so on. The best way to innovate in booze is to try things that sound weird alongside things that will be predictably good; it guarantees some failures, but it also promises something like coffee cider. 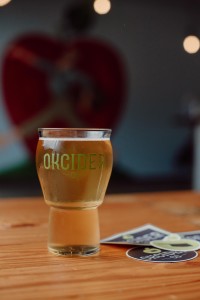 OK Cider Co is planning on self-distribution, and for now everything is in kegs for the taps at the cidery. They do have flights and a membership program that offers access to one-offs and experimental stuff. It’s a reason to celebrate for our friends and family with celiac disease, as well as a well-executed and much-needed addition to Oklahoma’s booze landscape.