How OKC Is Faring 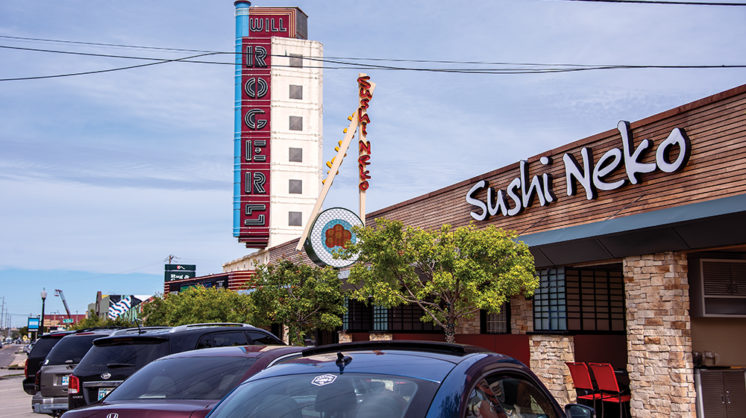 The reckoning is coming. That was the theme of 2016, based on the certainty that Oklahoma City could not sustain the restaurant growth we were seeing at the time. We listed 21 new restaurants – just local eateries, not national chains – in the food issue last year, and our initial list for this year had 36, but that number could grow by the time this goes to press, and the closings have been far fewer than predicted. That means growth is actually expanding more rapidly than in 2016, which prompted us to revisit the question of “How are we faring?”

The most surprising area of new development has been the Paseo. In much of recent memory, the options were Paseo Grill, Sauced and Picasso Café, but a wave of growth is remaking the arts district into a dining destination, as well. (For a full list, see the “Coming Soon” sidebar.) By summer 2019, assuming all are successful, there will be 12 bar and restaurant options in the historic arts district, including a new iteration of The Red Rooster and two concepts from Picasso owners Shaun Fiaccone and Kim Dansereau.

One of those 12 concepts will be Rachel Cope’s 84 Hospitality Group’s first venture in the district, an as yet unnamed concept that Cope said should open around March  2019.

“This is a prime time to be in the Paseo,” Cope says. “There are a lot of newer restaurateurs, and in some cases, we’re friends. We share information, and we’re excited about working together to attract traffic to Paseo, and we’re actively talking about ways to complement each other’s businesses.”

The city has fully embraced a new generation of restaurateurs, among whom Cope is a likely poster child, even as those operators have embraced the lessons about hospitality and cooperation they learned from previous generations. Still, not all the news is positive, and Oklahoma City is part of a national market trend that The Atlantic reported on in 2017 with this description: “The good news is that there are too many great restaurants to choose from. The bad news is … the same thing.” 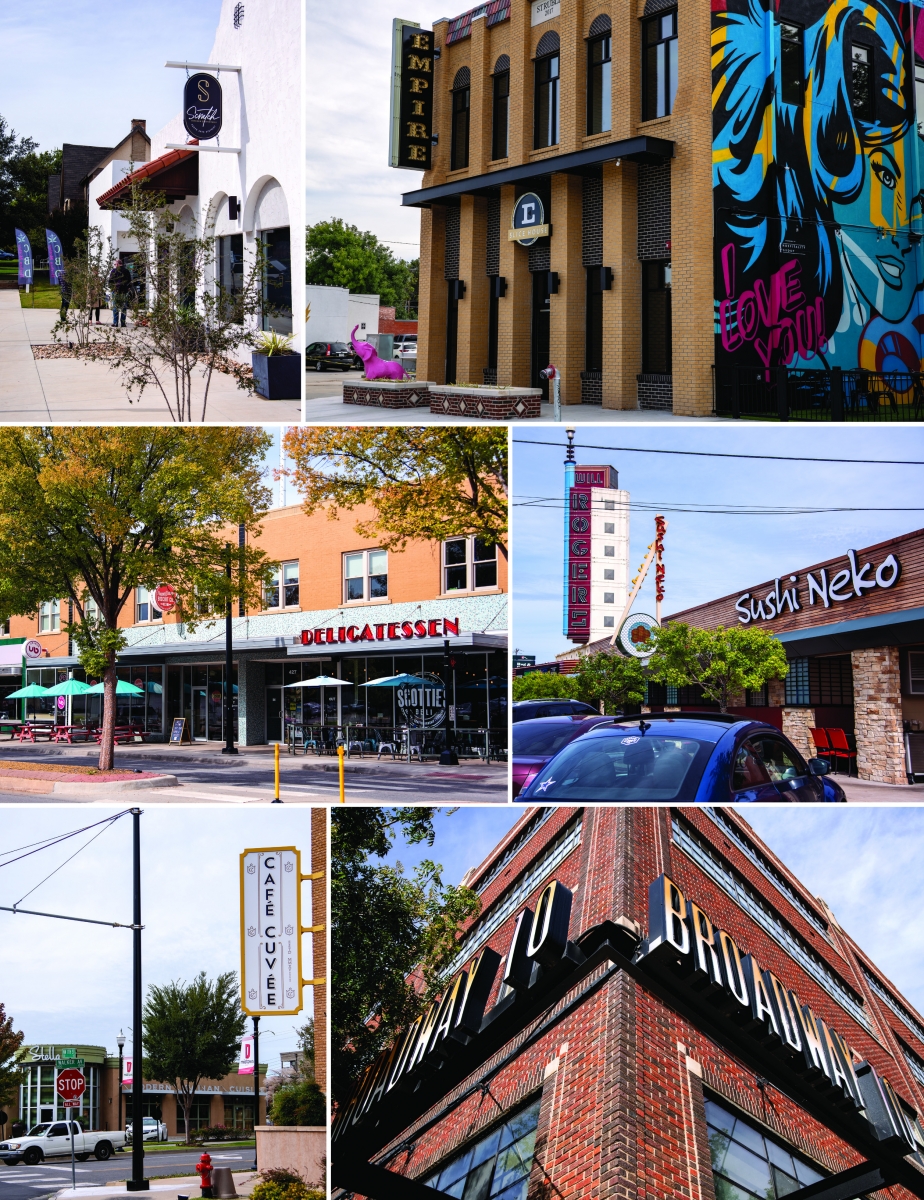 Young and Hungry The gist is that the amount Americans spend on dining out versus eating at home is now 50/50, up from 25/75 in the middle of the 20th century. For decades, middle-class restaurants – places such as Chili’s, Applebee’s and TGI Fridays – dominated the markets, but that tier, where the check is between $15 and $25 per person, is exactly where the most problems are right now. The group getting the blame for all the pain: millennials, the plug-and-play scapegoats for our time. Rather than thanking them for helping to kill mediocre, middle-class concepts, many people have responded angrily … but the death of mediocre chains means someone is benefiting.

That someone is local restaurants. An AT&T survey in 2017 showed that half of all millennials are willing to pay (at least a little) more to support a small local business. In a market that is eaten up with rising food prices, that counts as very good news. 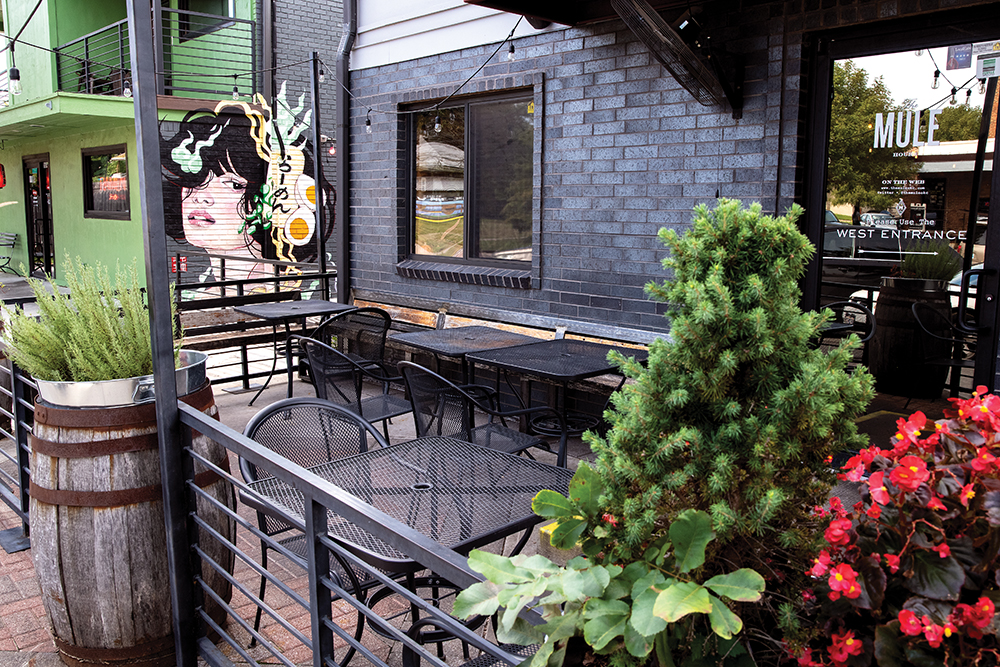 Streetside seating at The Mule in the Plaza District

“Millennials are absolutely a huge part of our customer base,” Cope says. “They’re very faithful to ‘local,’ and they will shame their friends for eating in chains. The good side of that is that they are really trying to support our neighbors and friends.”

Shaun Fiaccone said Picasso has always tried to cater to millennials, and they’ve done so with great success, but Fiaccone also sees the popularity of local restaurants growing beyond the millennial divide.

“I ask my neighbors in the dog park in Nichols Hills, ‘Where do you eat?’” Fiaccone says. “They name places like The Mule and Empire or districts like Plaza as their favorite places, and I’m blown away. They, too, are gravitating toward youth and vitality, and being part of this trend.”

Diners are certainly better equipped and better informed than ever before, and food television certainly gets some of the credit, even as it must take part of the blame for fast food burger commercials with people deconstructing a burger’s textures, layers and contrasting flavors. More than television, though, millennials act as evangelists for brands they love, and they are clearly having an impact on their parents’ choices.

Two years ago, Rachel Cope said that if we could convert 10 percent of the people who ate in national chains to eating in local restaurants, we wouldn’t need to discuss closing local restaurants as often. She may prove to be more prescient than we expected, but that leads to another piece of bad news. 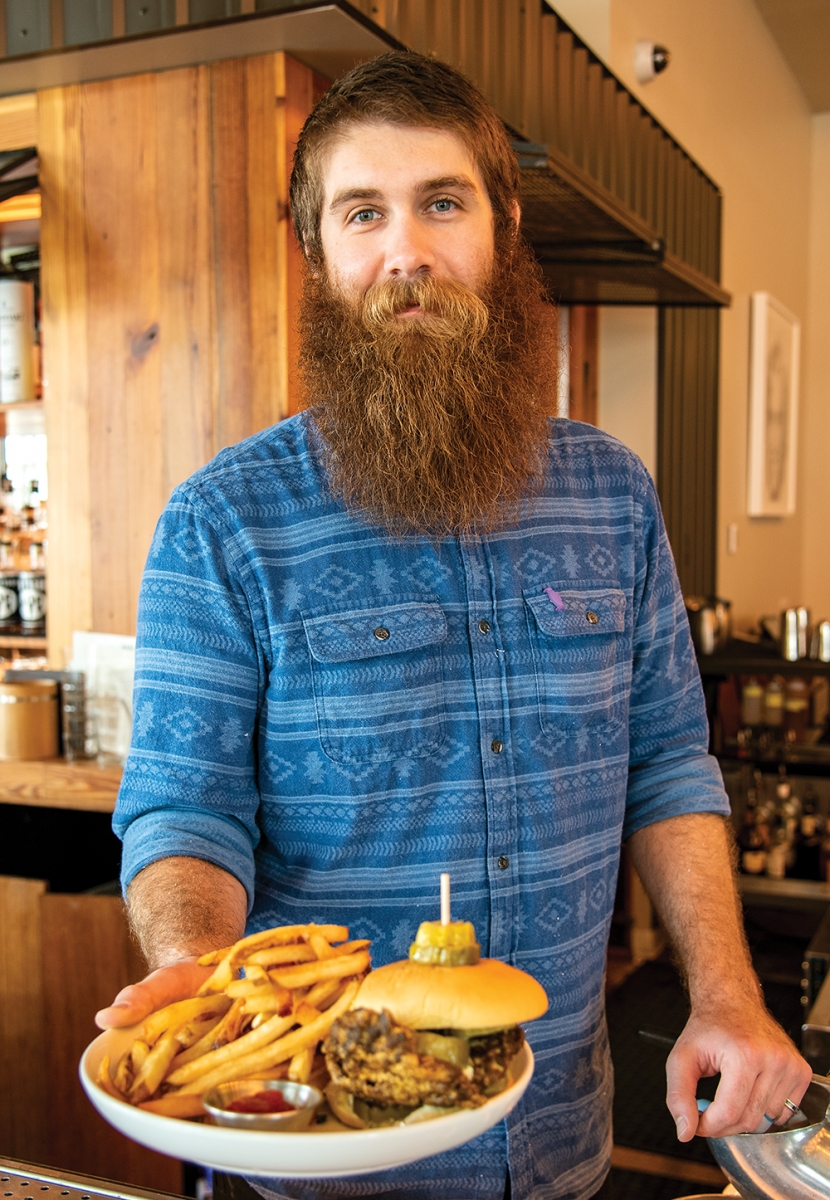 Short on Staff Speaking about the shortage of trained staff in the state, Chef Kurt Fleischfresser said that Vast and Western Concepts (Sushi Neko, Musashi’s, etc.) are still having a hard time attracting experienced staff. “It’s the worst it’s ever been,” he says. “Even established entities are struggling. Places like Vast have very little turnover, which helps.”

The shortage is a real problem, though, as anyone who has eaten out this year likely will have noticed. Fiaccone has handled the historic shortage by training people with no experience. “We create good servers,” he says. “We train to almost fine dining standards, and we worked with an HR company that understood personality profiles to identify the right kind of candidates for our restaurant.”

Paying for Space Rent prices are on the rise, too, and that’s bad for everyone. Popular areas of the city are now charging in the vicinity of $40 a square foot, and even the Plaza District, where young entrepreneurs such as Cope went for the creative rental agreements, is showing signs of rent inflation.

One of the most notorious casualties this year was the Irma’s in Midtown. While there is a compelling argument to be made that people say they want humanely sourced, locally raised meat products, even if that means a price differential of an extra dollar or two – something Irma’s provided – the other reality is that the price of doing business kept going up.

Chris Lower, one of the owners, says, “The common area maintenance and insurance got out of hand, and the parking, which wasn’t a problem in the beginning, got unmanageable. The north store was still making a profit, but the rent was going up there, too.”

These are the two biggest issues moving forward: rising rent and staff shortages. As a result, counter-service concepts with small footprints and minimal service will be the rule for the next few years. We will also see more locals moving east, west and south, taking advantage of less local density in the suburbs (see Expansion sidebar). Growth and change – for better and sometimes worse – remain on the menu.

While most restaurant expansion has occurred in or near the urban core or along the West Memorial corridor, some local brands are taking their concepts north, south and east, trying to get more local brands in population-dense areas around Tinker AFB and I-35 in Moore.

Three of the hospitality companies have been around for decades, but Gogi Go is barely a year old, and it’s already adding a location in Edmond.

John Lee, a partner in the fast-casual Korean concept, said the ownership group wanted to break into a different market, and they liked the food-court model offered by the Edmond Railyard, one of at least three restaurant co-op projects in progress in the metro. The new Gogi Go, which will open when the Edmond Railyard is finished – likely first or second quarter 2019 – will be half the size of the Midtown location, but with a very similar menu.

Urban Management Inc., the Norman-based company behind Interurban and HunnyBunny, is also headed to Edmond sometime in 2019. The signage is already up along Covell, so residents of west Edmond will have a chance to try the made-from-scratch biscuit sandwiches without driving all the way to Uptown 23rd. 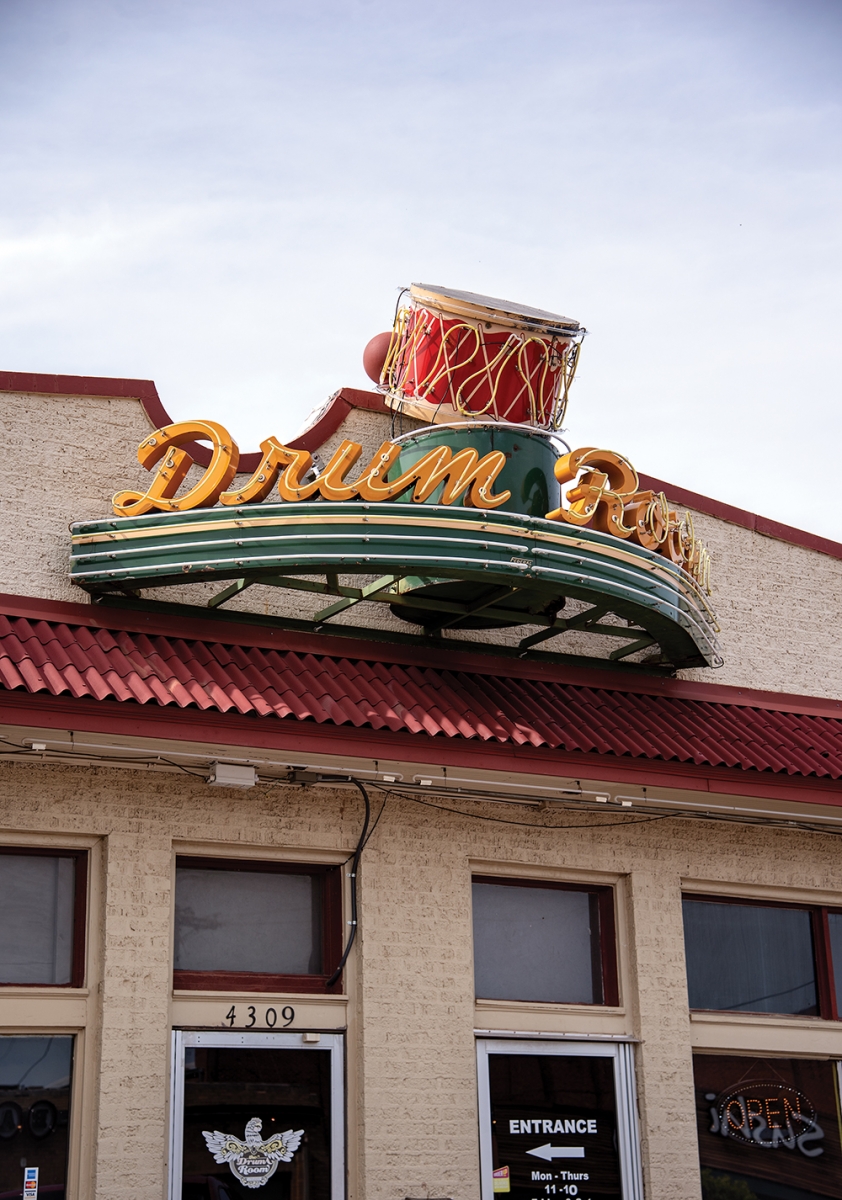 The Haynes brothers made the closing list this year with the demise of Urban Johnnie, but Rick Haynes said the company would benefit from the added focus on two new Johnnie’s locations, one in Moore that opened in July, and one that is scheduled to open Nov. 1 in Midwest City. Located at 6825 SE 29th, the Johnnie’s Express will be about a quarter mile from a Tinker gate. Haynes said the express locations serve breakfast, and since this one will be close to Tinker, they’ll open for breakfast at 6:30 a.m.

Finally, Deep Fork Group opened one location with two familiar brands in Midwest City in October. Located at 2320 S Air Depot, the 6,000-square-foot facility is home to a new Wedge Pizzeria and Drum Room. Partner David Attalla said the new location has the full Wedge menu, featuring wood-fired, brick-oven pizzas, and the Drum Room also offers chicken and waffles, burgers and salads. Like Johnnie’s, the new DFG joint concept is within a quarter mile of a Tinker gate.

Future flavors to put on your radar