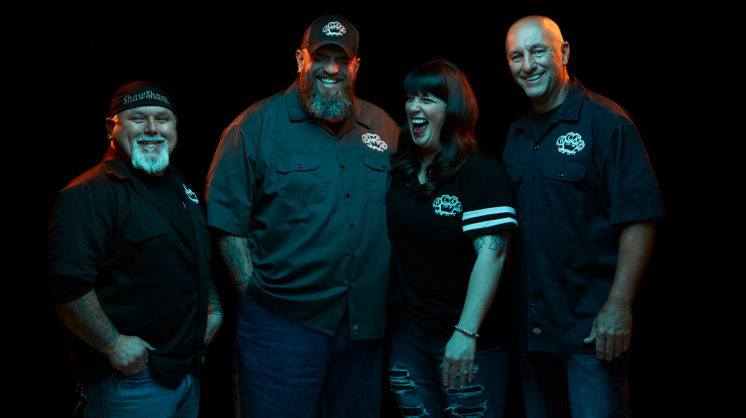 While swiping through Match.com in 2010, Toni Ely stopped short on one image.

“He had a picture of himself lying on the ground with his daughter lying on his back,” she says. “He was covered in tattoos, he had facial hair and he was loving on his kid. It just won me over.”

The two discovered much in common. Both served in the military. Both were parenting daughters. Both had visible appreciations of art – Adam Ely in his tattoos and Toni Ely in her paintings and graphic designs. She felt there was something magnetic about him, and the two married two years exactly after the day they met. Others have been curiously drawn to him, too.

In 2017 the couple started Hard Luck Automotive Services, a nonprofit providing free car repairs. Their mission states if you can afford the parts and they can fix it, they will. Their charitable work has garnered local, national and international media attention; more than 20,000 Facebook followers; and incredibly generous partnerships, with all eyes on Adam Ely.

“I don’t call businesses because no one wants to hear, ‘Hi, I’m Toni, part owner of Hard Luck. I’m Adam’s wife.’ They want to hear from Adam, so we almost pimp him out,” Toni says.

“We pimp him out,” Toni continues. “The guys do the mechanical work. I’ll answer any questions or phone calls, but he is our pretty face in front of the camera. He’s our money maker. Everyone wants to talk to and meet Adam.”

Adam Ely has a strong desire to help others, and Toni Ely is wholeheartedly along for the ride.

“I spent 39 months in a combat zone,” Adam says. “I saw the true evil of the world, and it has changed the way I look at my life now. If I don’t go to bed fulfilled every night, trying to put a smile on someone else’s face and making someone else happy, I feel like I haven’t lived that day to the fullest.”

Before Hard Luck, the Elys organized food and clothing drives. Then one weekend they helped their daughter’s coworker – a Domino’s delivery driver – fix her car for free.

“When that little girl drove off, that was my lightbulb moment,” Adam says.

Hard Luck provides the ideal vehicle for the Elys to give back to their community. The concept has caught on and demand has increased. A few years ago, volunteer mechanics Litahni Shawhan and Monte Huffman joined the team.

“We get along really well – being all combat vets, being all gear heads, and having kind of a united mission,” Adam says. “It’s not just 9 to 4. We kind of do life together, too.”

The four partners have equal say in the future of Hard Luck. Right now, that future includes filming a reality television show at Redemption Speed Shop in Choctaw, the donated space where Hard Luck currently operates.

“It’s like a family,” Adam says. “You’ll have 10 people watching us fix a car. Of those 10, only three are there because they have something wrong with their car. Everyone else just comes to hang out. It’s an amazing place.”

The Hard Luck crew is also fundraising $723,000 to build their own shop on land donated by Midwest City. Others have come forward to contribute services to the construction effort, including Rhino Heat and Air, Kudron Concrete, Smith Roberts Baldischwiler engineering firm and the Association of General Contractors for the State of Oklahoma. The outpouring of support continues to astonish the Elys.

“I told Adam to quit predicting what’s going to happen, because we never saw any of this coming our direction,” Toni says. “When we see something coming up, he instantly stresses. I tell him, ‘If it’s meant to be, it will happen.’”