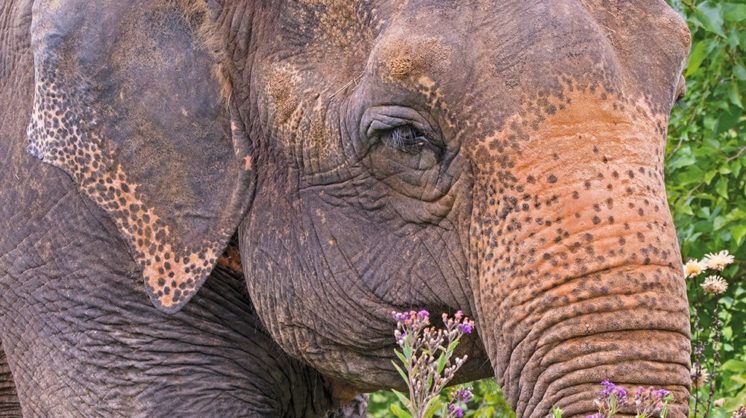 Save for the ubiquitous whirs and buzzes of summer cicadas, the woods at the edge of the 200-acre Endangered Ark Foundation are silent. I stare out into the thick foliage and wait. I’d always heard that, despite their size and thanks to heavily padded feet, elephants move through a forest quietly enough to sneak up on camping poachers. But after spending the early part of the day engaged with a gentle 9,000-pound mother Asian elephant and her frisky 2,000-pound, 2-year-old daughter Dori, it was hard to imagine such cumbersome and playful creatures sneaking up on anything. Somewhere in the woods was the herd’s matriarch, a 63-year-old named Susie, and if she were to come out and visit me, as I’d hoped she would, I feel certain that I’d hear her coming. Yet as I look one way for only a moment, I turn back around and there she is behind me, trunk out and eager for a banana.

I’d learned lots of things in my day at The Endangered Ark, a retirement home for circus elephants located on the outskirts of the southeast Oklahoma town of Hugo. For instance, elephants consume more than 150 pounds of food a day, their trunks contain more than 100,000 muscles and a mother carries a baby for 22 months before it is born. They have a dexterous “finger” at the end of their trunks that aids in picking up food, they sweat only through their toenails and an elephant can swim many miles using its trunk as a snorkel. An elephant’s heart weighs close to 40 pounds, they have been known to mourn and hold grudges, and the average annual cost of keeping a single elephant in captivity is $38,000. The Endangered Ark, home to the second-largest herd of Asian elephants in North America, is home to 11 of these delightful animals.

The Ark is a private nonprofit, dedicated to ensuring the future of Asian elephants in North America by providing a retirement ranch for circus elephants. The Ark’s goal is not only to breed and to care for these retired elephants, but to use its facility to educate the public about these endangered creatures. Endangered Ark has been open since 1993, but officially opened to the public two years ago. Visitors come from hundreds of miles to learn about the elephants, observe how they are cared for and even engage with them in a natural forest setting.

A 90-minute tour of the Endangered Ark begins with a hayride down to the enclosures. While these elephants were at one point trained to perform, at the Ark that is no longer the case; any participation done by the pachyderm is entirely voluntary. Rather than a series of tricks, elephants work with the keepers who actively participate in their daily care – visitors can scrub suds onto the elephant as the keepers make sure it is healthy, and watch the animal lift his feet so that he may receive a pedicure. At the end of the performance, the elephant’s foot is painted and placed on a piece of paper; the footprint is then auctioned off to the highest bidder, with the money going toward the $38,000 a year it takes to keep that elephant fed. 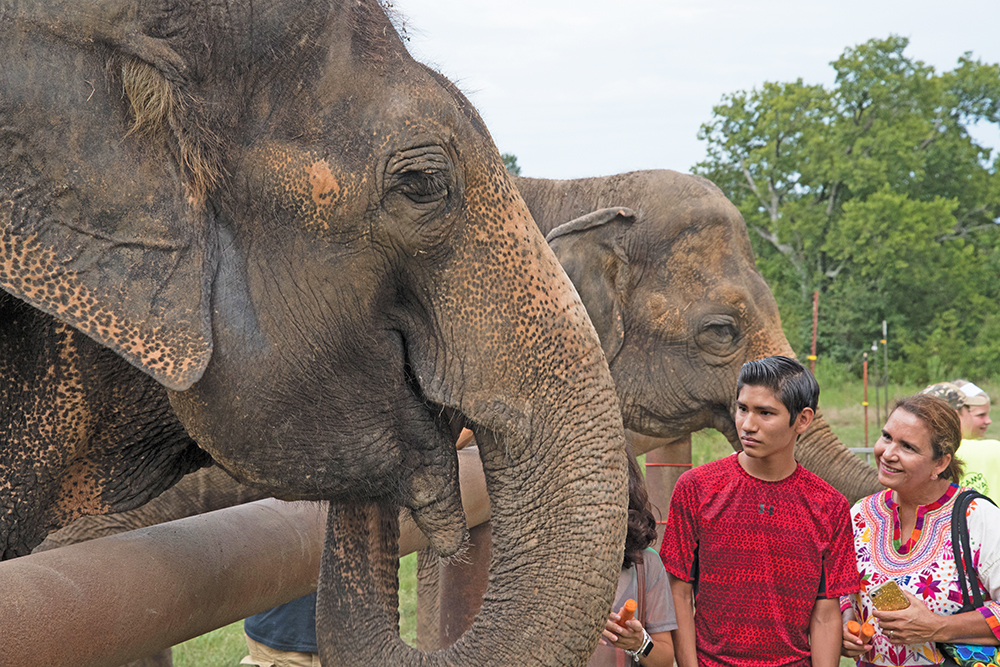 Audiences also get to learn how the trainers use treats in balls to help an elderly elephant exercise her arthritic trunk, and watch other aging residents do “Elephant Yoga,” stretching to stay limber. In an adjacent enclosure, Dori (the youngest in captivity in the country) and her mother enjoy a watermelon. The 1-ton toddler seems to enjoy crushing the watermelon almost as much as eating it.

After the demonstrations, the audience moves down to what is called “the woods.” While partially kept in enclosures, the elephants are also rotated between a pasture and a wooded area, with a creek where they can explore and enjoy being in a more natural habitat. Here, audience members can watch them play, feed the elephants bananas and carrots, and even take “elephant selfies” with cooperative critters.

The Endangered Ark has its eyes on the future. In October, The Ark hosts a pumpkin festival and will officially celebrate little Dori’s second birthday – with more than 1,500 guests expected to attend. The goal is to raise money for an educational facility that will allow for an even more influential experience with these beautiful endangered animals. To spend time with them is to truly understand them. As Susie takes a banana from me after her stealthy approach, and my private tour concludes, I can’t help but grasp more fully the urgency in educating people about these animals and the impact spending time with them can have.

Tours of the Ark run Fridays and Saturdays from March to October. They are by appointment only, and appointment times depend on the time of year. Private tours are also possible. For specific times, it is best to call to schedule – call 580.317.8470 or visit endangeredarkfoundation.org for more information.