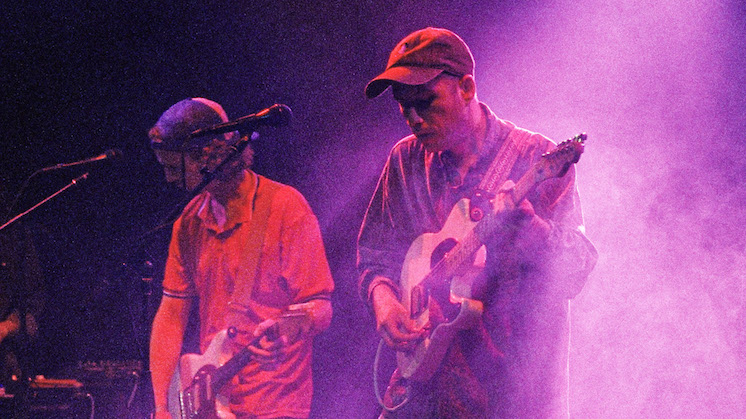 The Oklahoma City power pop duo is touring the country after releasing their bright and anxious album Full-On Monet.

For Danny Davis, his friendship with Wil Norton started partly out of obligation.

Their fathers were longtime friends and tried to link them together for years, but the connection didn’t spark until Davis started college at the same school as Norton in 2008. “It’s funny when your parents are sort of matchmaking you with somebody — it’s always like, ‘Okay, whatever,’” Davis said. “But we met, and it’s like, ‘Oh yeah. We have similar interests. We love the same music.’ And we just hit it off.”

Davis and Norton began exchanging demos and collaborating on various projects, including directing a musical about Godzilla. This fun-fueled creative rapport resulted in a plethora of Bandcamp singles under the name Husbands, as well as their 2015 debut album, Golden Year. But it wasn’t until their first live show at the 2016 Norman Music Festival that they felt like a real band, Davis said.

At the festival, the duo staged a live outfit with keyboardist Zack Zeller, bassist Tom Bishop and drummer Alberto Roubert to bring their studio sound to life. Now, Husbands have been playing a roundabout, nationwide tour with the same bandmates, including a free outdoor performance at Scissortail Park Aug. 19. With over 260,000 monthly listeners on Spotify and the January release of their third album, Full-On Monet, Husbands are moving forward with their punchy, surreal search for relaxation in uneasy times.

The band’s blend of sunny synths, surf-rock guitars and chantable melodies give them a seemingly feel-good charm. Their humor plays a part, too. References to “Despacito” and cheap Snoop Dogg-branded wine function as farcical winks on Full-On Monet. At the Scissortail Park concert, Norton affectionately labeled the band’s fans as “Hus-heads.”

Looking underneath the easygoing shroud, there are intentional hints of anxiety in the band’s newest songs. “It’s something about just trying to be at peace and feel good about yourself and your own place in the world as everything around you is sort of falling apart,” Davis said. “There’s a lot of internal back-and-forth.”

These themes are reflected in the band’s push for harsher, more rugged textures to match their ever-pulsing rhythms. Still, Davis said they balanced this edge with plenty of “blissful-type moments.” Despite being a five-piece live, Husbands in the studio is still a Davis-and-Norton-driven project. “I think we got pretty good at what we want to do from a sound standpoint,” Norton* said. “Once we had our solid (singles) — we call them the legs on the table — it’s all just dressing at that point.”

The live setting still offers plenty of enjoyable surprises for Husbands, such as a recently recorded session with live label Audiotree. “For me, it has been on my bucket list for probably 10 years,” Norton said. “It was incredible there. If we had to put a top three of stuff we’ve done, it’s probably on there.” What else would be on the list? Husbands’ first show at Norman Music Festival, and their first out-of-state, not-Texas show at Treefort Music Fest in Boise, Idaho.

“It was a rowdy set — we played three times over the course of two days,” Davis said. “It was the first time we saw people outside of our neighborhood appreciating this stuff. That stands out as a momentous thing where we got there and people were singing our songs with us.”

Maybe this reaching, unifying connection is the peace that Husbands, and the rest of us, are searching for.

Husbands embark on another run of shows in the Northeast and Midwest alongside Jaguar Sun starting Sept. 16 in Toronto.

*Correction: A previous version of this article misattributed a quote to Davis.