In the Midst of Gorillas - 405 Magazine 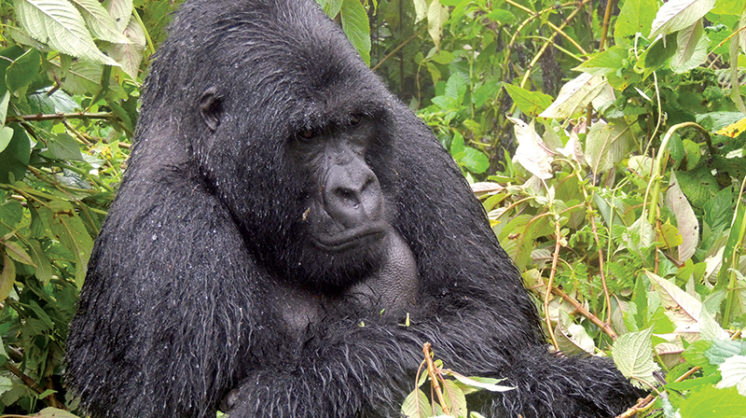 Against the backdrop of mist and eucalyptus trees, just before we set off to see the gorillas of Rwanda’s Volcanoes National Park, locals performed a tribal musical evocation.

The base of an inactive volcano rose up just beyond, disappearing into the low-hanging, fast-moving clouds. Rain or shine, we would soon be traversing that volcano in search of the Sabyinyo family, a group of 14 mountain gorillas led by a massive male named Guhonda. The Sabyinyo family is one of 18 families of mountain gorillas, first immortalized by Dian Fossey some 45 years ago, that call the dense rainforest of the East African Virunga mountain range their home.

To reach our gorilla family, we weaved along a path cut through narrow stone walls designed to keep Volcanoes’ buffalos in the park and out of the local potato farms. As soon as we picked up the trail, my foot sank immediately into six inches of black sludge. The thick mud sucked at my boots as I extracted my foot again and again, making my way up the steep incline on the seemingly interminable hike.

The forest canopy was no match for raindrops that cut through the trees, beating a deafening rhythm on the hood of my rain suit. Soon the so-called trail more accurately resembled a quagmire or small river. A tracker just in front of us chopped away hanging vines and brush with a machete, creating a crude path through the bamboo and stinging nettles. As we’d been promised, getting to the gorillas wouldn’t be easy, but the experience would ultimately be well worth it. I hoped so.

As a child, my favorite toy was a tiny plastic gorilla. My parents, when tired of my 2-year-old babble, would send me on a hunt for my beloved figurine. Were it not to be found, my dad (fearing meltdowns, and unbeknownst to me) had a stash of these little toys, inexhaustibly producing a new one any time a gorilla happened to disappear.

This has not been the case for the African gorilla. In 1980, while I was looking for my toy gorilla, poachers were combing the Virungas hunting the real deal, and succeeding in their quest. According to a 1978 census, these breathtaking creatures had dwindled to a mere 260. Without a massive push for awareness and action, they were on the verge of vanishing from the planet forever. 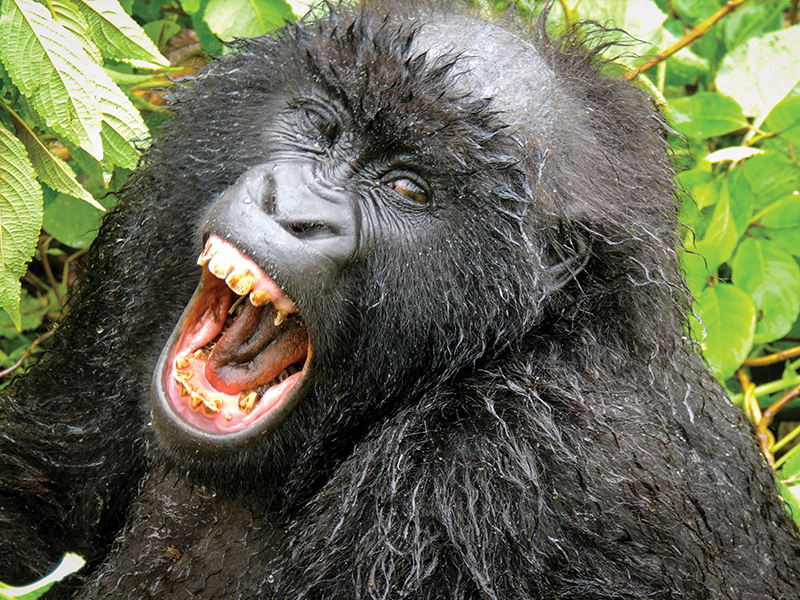 Fortunately, the gorillas have not vanished, but thrived. For more than 30 years, massive conservation efforts by various national and international entities have protected the gorilla and his habitat. Activists have tracked gorillas’ behavior in the park, working with local Rwandans to demonstrate that the park is more valuable in its natural state, generating tourist dollars, than it would be if the forest was cut down and used for farmland and firewood.

Permits to go tracking, which usually are purchased months in advance, are $750. Groups are limited to six people, and each group visits one of 10 habituated families of mountain gorillas. The challenging hikes take anywhere from 45 minutes to several hours. Once with the gorillas, visitors spend one hour before returning. Weather, as I quickly learned, can be difficult, especially during the rainy season. And rain or shine, gorilla sighting or not (although almost everyone sees the gorillas), there are no refunds.

Our guide Feliciens brings us to a halt. After a little more than an hour, we have come to the gorillas. The silverback, he had explained, will either grunt, giving us permission to “join” them, or respond with an aggressive “ah-ah-ah-ah,” suggesting that we stay back, they are busy.

At a whisper barely audible over the pounding rain, Feliciens explained that on sunny days, the young gorillas are playful, often intoxicated by fermented celery root. They are curious and often try to play with humans. The experience is typically an intimate one. We are to give the gorillas only a few yards of personal space, and while we must honor their space, they do not have to honor ours. 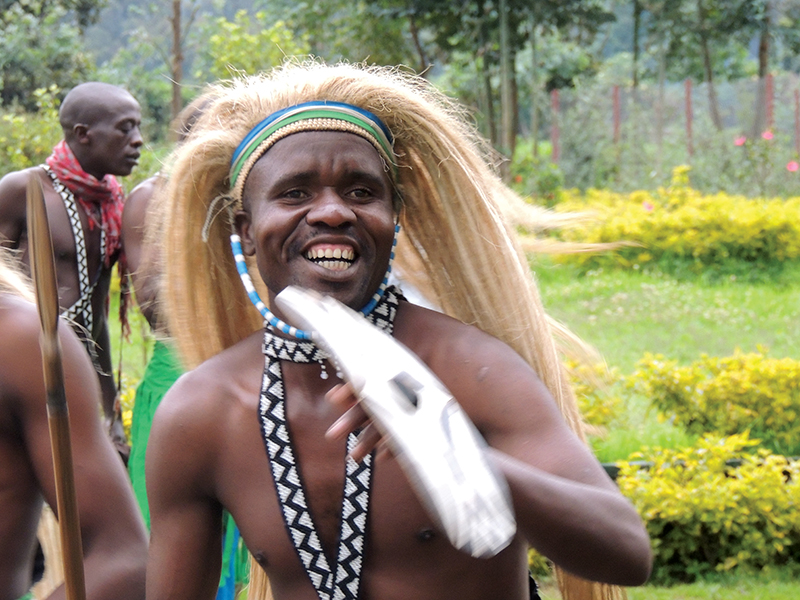 We push through thick bamboo and come to a clearing. There, I see the face of a massive silverback no more than 10 feet from me on the other side of some brush. His deep black eyes catch mine. The guide grunts twice and we wait. The moment hangs … and finally the silverback, as we’d hoped, parrots back the grunt. With his permission, I enter his world.

Nonchalant, he chews the leaves off of some foliage. We can hear his breath. Behind him, branches crash as other members of the Sabyinyo family forage for food. A mother sits lost in thought while her baby, the newest of the group, nurses. The rain drenches us one last time and then stops. As it does, so does time.

Ultimately, we spend an hour in that little clearing – watching the beasts shake off the rain, roll around, groom, yawn, burp and stretch. It is peaceful. It is terrifying. Occasionally Guhonda grunts. “He wants us to know that it is OK that we are here,” Feliciens explains.

At one point, one of the males approaches me. I fumble with my camera as he gets close. With my hands shaking and lens fogging up, I can’t get a picture, but I need no photo to immortalize this moment. I am simply a kid in a toy box who finally found his gorilla.

Our car waits for us in a small village on the edge of the park. Outside a tiny building, several young kids sell hand-carved gorillas. I lift one of them and think of how my father had always managed to make another appear. Thanks to the hard work of so many conservationists, environmentalists and politicians, the real gorillas seem to be doing the same thing. At first I buy just one, then think about my nephews and the child I may one day have, and buy more. Many more.