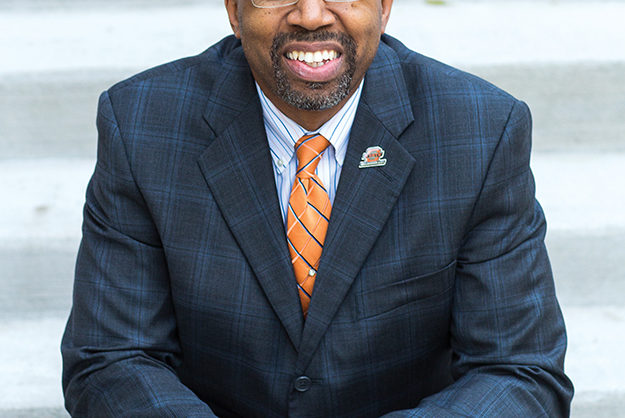 Although Basketbal Has Been A Central Theme throughout Pink’s career, the constant pursuit of education has figured even more prominently for the youngest son of uneducated parents. So when he’s not signing autographs as his notable doppelgänger, Dr. Pink can be found at OSU-Oklahoma City, serving as vice president of academic affairs and helping countless others reach their potential.

What is your hometown? Abilene, Texas. I tell people I served an 18-year sentence there.

Is it that bad? It’s a great place to grow up … and leave.

What is your wife’s name? Lori.

What are you currently obsessed with? “Pet Rescue Saga!” STAY AWAY – once you’re in, you’re addicted!

What is your greatest fear? That my children will grow older without a relationship with God.

What do you believe that most people don’t? That our country would be just fine without political parties.

What’s a risk worth taking? Moving to a place you’ve never known and saying, “We’re going to make this work.” Be sure to get a job first, though.

Do you make New Year’s resolutions? No. I make resolutions, but I don’t restrict them to the New Year.

What do you bring to a crowded room? Height. (I’m 6’5”.) I’d also like to think I bring laughter and smiles.

Do you collect anything? Oil lamps. My dad used to collect them and I’ve added to the collection.

What advice would you put inside a fortune cookie? Trust God. Do not lean on your own understanding.

Where are you likely to be on a Friday night? At a Mexican restaurant somewhere and then home. It’s a good night to relax.

Whom do you think you could be mistaken for? John Salley from the Detroit Pistons. I’ve even signed a few “autographs” for him.

What were your parents and teachers wrong about? That I would use all the information from science class. I remember my teachers saying, “You’re going to need this one day!” It’s only been handy for my kids’ homework. Maybe that’s what they meant.

Do you have any mad skills off the basketball court? Singing. I’m in a male a cappella group. When Lori and I got married, I sang to her as she came down the aisle.

What do you wish you’d started doing long before you eventually did it? Playing golf. I love it.

What do you value most in your friends? Trustworthiness.

What should everyone try or experience once in a lifetime? They should try to make a good marriage. That doesn’t mean it’s great all the time. It means finding that person who makes you happy.

What do you wish you’d never thrown out/given away/lost/sold? I was moving to Portland, Oregon to start a basketball program and I stopped to stay the night in Denver. During the night, someone broke into my moving van and stole almost everything I had, including many personal and family mementoes. I literally had to start all over.

What’s not as important as it used to be? Ever since my knee surgery, playing basketball has become less important.

What’s more important than it used to be? Taking care of family, whatever that may mean.

Is there anything you’d change about your childhood? I was the youngest of five kids – two boys, three girls – growing up in west Texas. There were eight of us, including my grandmother, living in a two-bedroom house with no A/C. We had nothing, but we had no idea we were poor. So, what would I change? Nothing.

What examples did your parents model? Be nice and treat people well, no matter how they treat you. My parents were exemplary role models at this. They never yelled or screamed – ever.

Do you have a nonprofit shout out? I’ve served on the board of the Foundation for Oklahoma City Public Schools for three years and I love the direct impact the Foundation has on kids’ lives.

What words have you eaten? “I will never work at OSU!” – something I said after receiving my doctorate from OU and working with Sherri Coale and the women’s basketball program at OU.

What’s the best advice you ever got? It was from my college basketball coach, Dan Hays: be yourself. He used to say, “Be what you is, ’cause if you be what you ain’t, you ain’t what you is.”