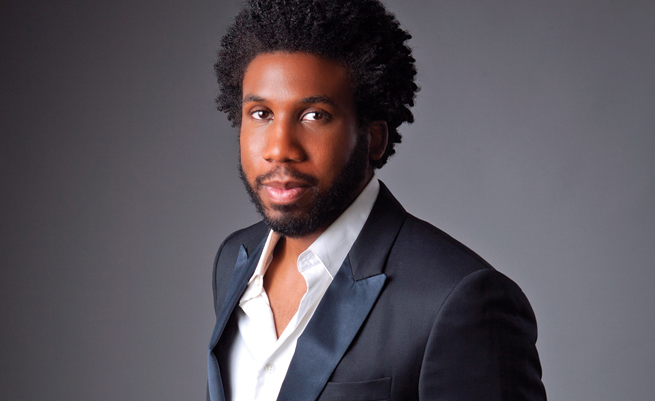 His Oklahoma roots start at the very beginning. Born in Norman, Oklahoma, Nyambi Nyambi identifies himself first as a huge Sooner fan and later as an actor. Nyambi currently plays the role of Samuel the waiter on the CBS sitcom “Mike and Molly.”

The journey from Norman to Los Angeles, where the actor lives and works, has been marked by several milestones that reveal an individual who, at the age of 33, has more talent in his rearview mirror than most people encounter in a lifetime. The former Bucknell University basketball standout is just as adroit on stage as on the court, receiving a masters of fine arts in acting from NYU and reveling in his passion for live stage performance.

Never satisfied to stand still, the actor aspires to run his own production company and nonprofit organization one day. To that end, Nyambi hopes to pursue a second masters degree in Administrative Leadership at the University of Oklahoma… in the town where it all began for the avid Sooner fan.

Your character on the show, Samuel, is a Senegalese waiter. How have you managed to nail the character so well? The accent seems spot-on.
I traveled a lot last summer and Senegal was one of the places I went. I wanted to meet the people and get a feel for their mannerisms and humor – just to get a sense of how they are.

Did you tell them you’re a star of an Emmy®-nominated sitcom in the U.S.?
Nooooooo. I didn’t want to do that, but as soon as I got off the plane, they could smell that I wasn’t from there. I’m of Nigerian descent, but the moment I spoke with an American accent, it was over.

The memo was out that the American had arrived?
Exactly. A man came over to me – he looked official – and offered to help me fill out a form for entry. The form asks for your occupation. I told him I’m an actor, which in a lot of cases is the same as saying, “I have no money.” The man said, “Actor! Now I KNOW you are big man! You are big man! Give me some money.”

Was it like that the whole time?
Halfway into the trip, I could speak in their accent, so it got much better.

More than once an equinox, which is really all I can fit into my Twitter regimen.
Well, by that comparison, I guess I do. But you’re kind of a lazy tweeter.

No free time. But I’ve heard that you recently watched 365 movies in 365 days. Now there’s some free time.
It wasn’t exactly one movie per day, but I did get in all 365 in a year.

How did you decide which movies to watch?
I got suggestions from my Twitter followers – some were better than others. But now a lot of the storylines have blended together and I can’t keep them straight. But overall, I think of it (365 in 365) as a celebration of peoples’ work.

I understand you were Sooner-born.
Yes! I was born in Norman, and I’m a Sooner at heart. Both my parents went to OU, but we moved when I was young and I actually went to college at Bucknell. My parents live in Virginia now, but they have a room that’s blinged out with OU stuff – we call it the “Sooner Suite.” I’m very proud of my Sooner roots.

You should be proud of your other roots – I’d kill for your hair. But only if it’s low-maintenance.
It’s not too bad. I really only have to fluff it back up after I wake up.

What are you currently obsessed with?
OU Sooners are my number one obsession, of course. I’m also obsessed with a new game on my iPad® called Temple Run. I can’t get enough!

Do you have any real-life heroes?
My parents. They’ve been a huge influence on my life. And I’ve always admired Magic Johnson.

What’s not as important as it used to be?
The need to be liked by everyone. It’s impossible.

What’s more important now?
To be a creative person. Writing, developing art, fostering artists and bringing a voice to people whose voice falls on deaf ears.

I know you have a masters degree from NYU’s graduate acting program. Why is art important to you, and why is it always one of the first items on the chopping block in our schools?
I think people think of it as “fun” and not “serious work,” but you know, you have to be an artist to be a surgeon. What makes art so important is that it’s an entity that gives a person a well-rounded view of life and to take it away deprives that person of fully learning who they are.

What do you believe that most people don’t?
I’m very optimistic. I believe it’s important to celebrate the work of other people and have faith that your day to shine is coming.