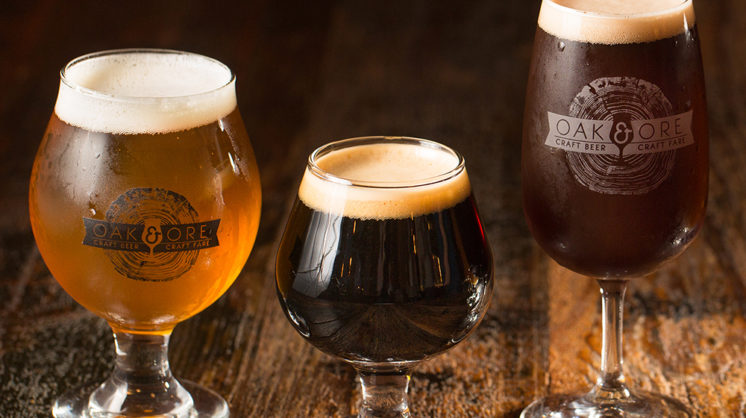 This year, Oklahoma Craft Beer Week is being combined with American Craft Beer Week to highlight the wide variety of local beers available in the state. Micah Andrews, owner of Oak & Ore in the Plaza District, is hosting four nights of showcases and collaborations for state breweries, beginning Monday, May 14.

“Collaborations happen a lot in the beer world,” Andrews says, “and we thought it would be a fun and educational time for our staff to work with local brewers.”

The Oak & Ore staff partnered with Elk Valley, Roughtail, Stonecloud and Prairie Artisan Ales OKC to create limited release beers for the week. The collaborations are:

Blended Sour with mango and pineapple

Saison aged on red grape must

For the Stonecloud collaboration, the staff got to taste eight different sours, and then owner/brewer Joel Irby walked them through principles of blending. The staff experimented with several different blends before choosing the winning combination.

“Our staff loved the process,” Andrews says. “Not everyone got to make it to every session, but everyone made at least one, and it was a really fun, cool, educational time.”

In addition to the collaboration releases, each night will feature at least two other Oklahoma breweries. The full list of breweries and beers is available at oakandore.com under the “Events” tab. Andrews said they will add local beers every night, and by Friday, the wall of taps will be 100 percent local brews. The festivities run from 6-10 p.m. all four nights, and any remaining special releases will be poured until they run out. Andrews said the Elk Valley and Roughtail releases are very small batch, so it’s best not to count on those being available for very long.

The culmination of Craft Beer Week is the Oklahoma Craft Beer Festival on May 18 and 19, at the Cox Convention Center. Andrews said Oak & Ore will be open both nights, but he’s encouraging people to support the festival. A recovery brunch will run from 11 a.m. 2 p.m. on Sunday, and will feature coffee-based beers from Marshall, Twisted Spike and Dead Armadillo.

Oak & Ore is located at 1732 NW 16th in OKC’s Plaza District. Tickets for the Oklahoma Craft Beer Festival can be purchased via its website: oklahomacraftbeerfestival.com.