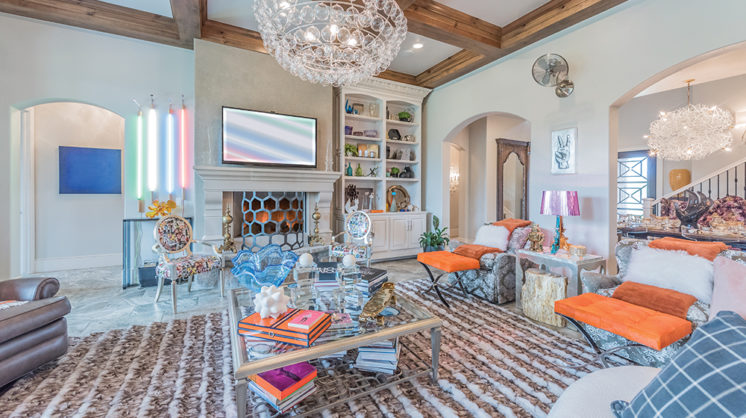 The most astounding thing Jarrad Hewett has to say about his vibrant, joyful home in Rose Creek is this: “Initially, I’d planned for this home to be minimalist and stark gray.” As he speaks those words, Hewett and the genius interior designer behind much of the visual cacophony, Grant Mathiews, attempt to stifle a laugh.

Friends for 15 years, Hewett and Mathiews have worked on two home projects together, and Mathiews has also worked with Hewett’s mother. “When I moved back from L.A.,” Hewett says, “I wanted a very traditional home, with dark wood and 18th-century European design influences.” The opposite of the prevailing design trade winds in Los Angeles, in other words.

He’d spent years in L.A. building his career, which is as colorful as his home. For three years, Hewett has been the voice of Disney, meaning that when you hear a voice promoting a show on the Disney Channel, there’s a good chance it’s him. He’s also the voice of the White Castle hamburger chain, and has done or does work for Coca-Cola, Jeep, Walmart, Toys “R” Us, ABC, HGTV, WB Kids, CMT, Fox and the X Games — to name a few.

These days, he works from a personal studio tucked away on the second floor of his home in a neighborhood that skirts the border between Oklahoma City and Edmond. His house is easy to spot (possibly even from the air), because its shutters are painted a brilliant shade of bright marigold yellow, a move he made sure to get approved by his homeowners association.

His other two careers are equally demanding. Hewett is a New York Times best-selling author three times over, and hosts syndicated radio shows focused on personal development and energy healing. His number one best-sellers, Love, Life, God: The Journey of Creation and The Gospel of You, were solo projects, and his third, The Big E — Everything is Energy, was co-authored with Dee Wallace. He’s in the process of writing his fourth book right now. He also connects with clients through “I Am That I Am,” his monthly series of calls and energy work, and through vibrational sound therapy.

But back to his home. It seems unfathomable that this buoyant, happy soul would inhabit a modern, gray-on-gray home, yet that was his plan … until, that is, a fateful day in Dallas. 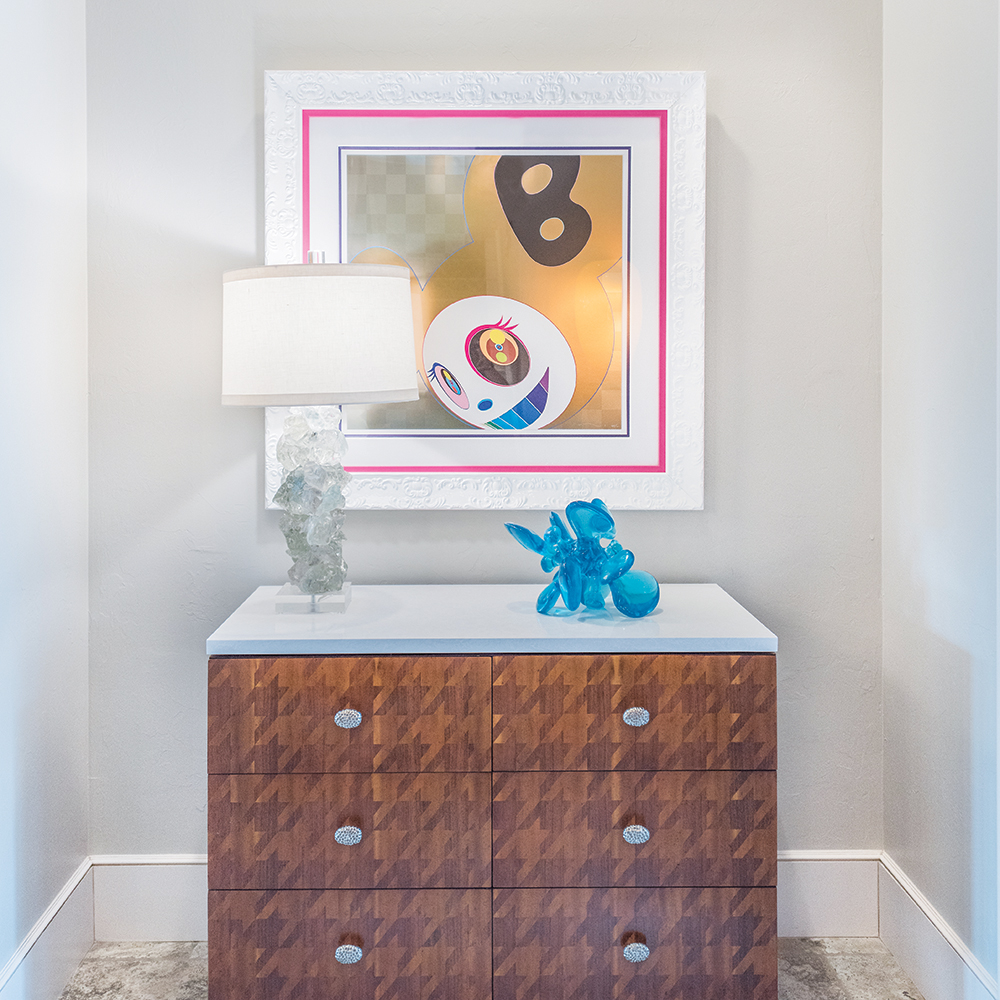 “Grant (Mathiews) and I had gone to Dallas to look for accessories, and we went to Jonathan Adler and Nest, and it was like I’d literally turned a corner. I saw all of this color, and I thought, ‘I’m a creative person,’ and that was it. My direction changed,” Hewett says. For Hewett, interior design is a recreational pastime. It’s a de-stressor, and an ongoing source of creative joy. “Things here are always evolving. We’ve done everything right. I don’t cut corners.”

By everything, Hewett means many things. Chandeliers aren’t just painted, they’re powder-coated. Tables have had silver leaf painstakingly applied. Faux finishes aren’t finished until they’re just so. Sofas and chairs are covered in a washable synthetic that looks like exotic leather, so that Hewett’s beloved boxer Sadie can lounge at will.

One thing Hewett had his heart set on was — wait for it — a rocking recliner in the living room. The challenge he and Mathiews faced was finding one that, as Mathiews says, didn’t look like it belonged to Frasier’s dad. The two orange ottomans nearby were actually the first pops of color, followed by a pair of Jonathan Adler throws. Now, the home is a joyful cacophony of color and texture, which defies logic by managing not to feel overdone or crowded. During the holidays, the place goes into high gear, and each room is a meticulously executed expression of celebration.

“Jarrad goes 150 percent, not 110 percent,” Mathiews says of his client. “Everything he does is quality. He may look for good deals, but he never compromises quality.”

►Take a closer look at the Miller home's outstanding decor by clicking the photos below.