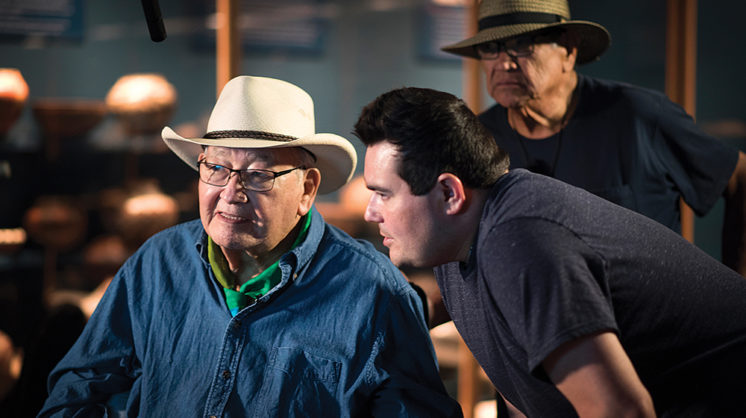 Jeffrey Palmer is about to take flight. After years of studying and teaching college courses on filmmaking and Native American representation in cinema, Palmer is entering the conversation with his own major film.

Words from a Bear, Palmer’s first feature film, will make its public premiere this fall on PBS as part of its award-winning American Masters series. The film debuted in January at the 2019 Sundance Film Festival, and is scheduled to make its Oklahoma debut at OKC’s deadCenter Film Festival in June.

Words from a Bear tells the story of Kiowa author and poet N. Scott Momaday, who was born in Lawton, earned a doctorate from Stanford and became the first Native American to win the Pulitzer Prize for Fiction for his 1969 novel House Made of Dawn.

“I grew up in a Kiowa family that spent almost every weekend at powwows,” Palmer says. “My grandfather, grandmother, aunts, uncles, cousins, father and mother were all competition dancers … I was always in the presence of Kiowa elders, and listened closely to the stories they told.

“Telling the profoundly important story of N. Scott Momaday in Words from a Bear is more than a job for me,” Palmer continues. “It feels like an important obligation that I owe to my family and my people.”

Palmer’s deep tribal connection goes back to a childhood in Carnegie, where the Kiowa tribe has its headquarters. In middle school, his family moved to Norman, where his father was finishing up his PhD and working at OU – but the move did not diminish Palmer’s desire to learn more about his culture.

“I majored in anthropology at the University of Oklahoma and spent a lot of time watching ethnographic films,” he says. “I did not like how the films portrayed Native Americans. I started thinking about how those films would be if they were made by someone inside the culture. The urge was even stronger when I started on my Masters in Native American Studies. I was on an academic path, but I wanted to make films, not keep writing papers.”

So, after earning his Masters, Palmer started making films. He worked with his father to help write scripts that he would film and edit, then used the results to apply to film grad schools. A full-ride scholarship led him to the University of Iowa.

Upon graduation, Palmer was eager to start making films – but he knew there was more that he could learn by staying in an academic environment. The decision took him to Cornell, them back home to UCO.

“As my academic career progressed, I realized that there was a voice missing that I could provide,” Palmer says. “Once I understood the power of providing that voice, and how powerful a tool that could be to present ideas and change the way people look at history, that became my mission.”

For his next project, Palmer reached back to his Kiowa upbringing to create a film about the importance of community. In Isabelle’s Garden, a young girl helps to combat poverty and food insecurity through community gardening.

Isabelle’s Garden premiered at Sundance, travelled to major festivals around the world, and ended up on PBS. The attention led to Palmer getting the call to direct a film about Momaday.

“Much like Scott, I was a young Kiowa artist growing up in the shadows of the Wichita Mountains, dealing with issues of poverty, racism and marginalization,” Palmer says. “I also experienced the triumphs of using art to maintain the stories of my people, a feeling of respect and honor that I will always present in my work.”