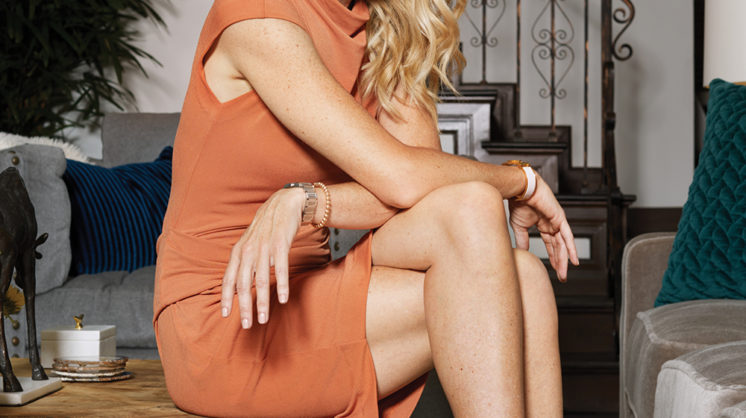 Interior designer and “Sweet Home Oklahoma” star Jennifer Welch has an “on/off” switch, a kind of fail-safe device in her personality that keeps her from critiquing friends’ style choices when she’s off the clock. It preserves relationships and, Welch said, keeps the professional side professional and the personal side personal.

“I have friends who will say, ‘I don’t want you to come to my house — I’m afraid you’re going to judge it,’” Welch says at the beginning of a blazing hot, late summer day in Nichols Hills.

“I understand that, but when the work mode switch is turned off, I just want to hang out with my friends — I’m not going to be judgmental of their homes.”

But when Welch is in pro mode as principal of Jennifer Welch Designs, she launches herself into her work with uncompromised zeal. Consider her recent job decorating and outfitting the 28th-floor penthouse apartment in City Place, the Walter Ahlschlager-designed 1931 art-deco colossus at 200 Park in downtown Oklahoma City. The client’s taste perfectly dovetailed with Welch’s preferred mode: modernist elegance. But when Welch entered the space, it was hardly a bright, clean canvas ready for the artist’s touch.

“When I first walked in, there was nothing but the load-bearing columns,” she says. “The windows were out, and the wind was blowing through the wire coverings. It was literally a shell.”

Today, those 86-year-old, load-bearing columns provide an earthy, contrasting texture to a bright, open and thoroughly modern home overlooking the burgeoning growth of downtown OKC. Welch filled the space with furniture inspired by mid-century modernism, opulent chandeliers and high-end, low-profile appliances to create a home that will always astound both owners and visitors.

Welch considers the penthouse one of her greatest achievements as a designer.

“It was so fun to piece that together,” she smiles. “That one, I’ll always have a strong attachment to it.”

She splits her time between residential work and commercial spaces, which require different sets of interpersonal skills. When she designs homes in Oklahoma City or in far-flung locations like Palm Springs, Calif., it is with great sensitivity to the homeowners’ needs and, importantly, their emotions. 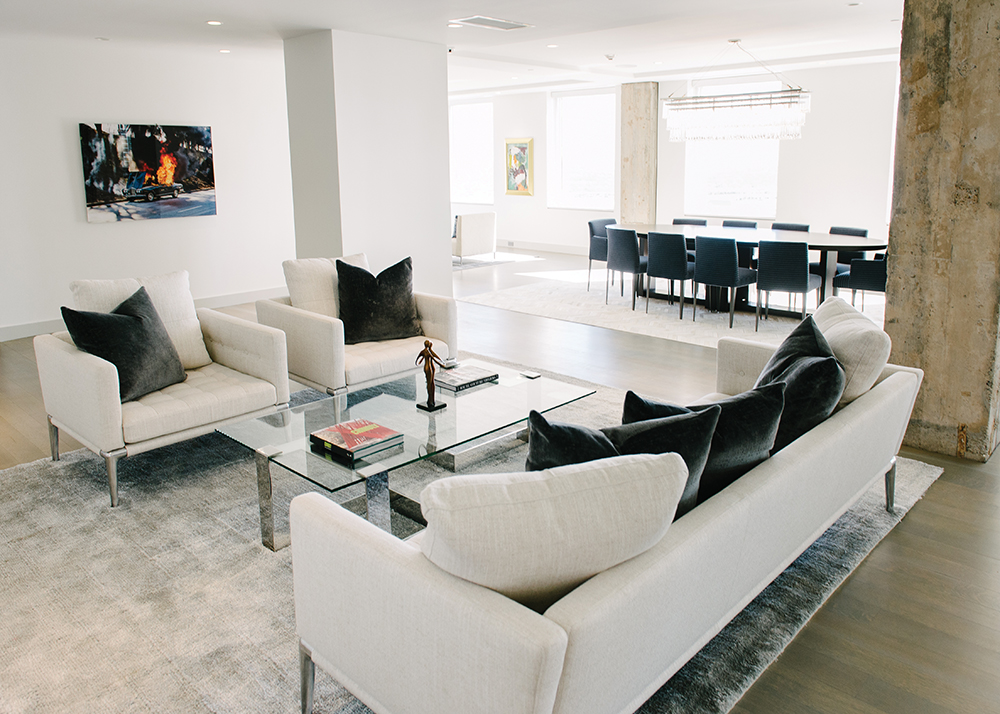 “Commercial work is easier in the handholding department, because you’re dealing with a business,” Welch says. “They’re not bringing their babies home from the hospital there. They’re not celebrating Christmas morning there. It’s not a place to which you are attaching deathbed memories. People tend to be very emotional about the decisions they make for their homes, and so much of my job is psychology.”

That is not to say that Welch sugarcoats bad ideas. She brings the same kind of directness to her job that viewers see on “Sweet Home Oklahoma,” the Bravo reality series in which Welch stars with her ex-husband Josh and friends Lee Murphy and Angie “Pumps” Sullivan. When she was recently commissioned to design a 30,000-square-foot commercial space in downtown OKC with exposed ducts and plumbing, the company’s leadership wanted to paint the ceiling area black. Welch stood firm, saying the dark treatment would undercut the impact of the industrial surfaces. Much back-and-forth ensued, with Welch standing firm on her aesthetic principles.

“I said, ‘I will stand in front of the paint machine and take that on me before I allow you to paint that ceiling,’” she recalls. “He was adamant. It took three or four meetings.”

And she won. Welch said she always wins these arguments, because she stays true to the design sensibilities that made her a success. Even with the sensitivity she brings to her residential clients, honesty gets the job done.

“If their idea is terrible, I have to say, ‘I know you want that, and I know you think that’s right, but I have 20 years of experience and that is a mistake, and I know that with everything in me,’” she says. “I’m very direct about it. I say, ‘You hired me for my opinion, and I’m not going to sugarcoat this: You cannot do this.’”

Ugly lamps will not survive in a Welch-designed environment. “They’ll ask, ‘Where do I put this?’ and I’ll say, ‘The attic,’” she says, letting out a big laugh.

Big laughs make up a major part of Welch’s life these days, now that “Sweet Home Oklahoma” is holding court on Bravo. The series, which began airing in March, follows the Welches, Murphy and Sullivan through their raucous, upper-class OKC lives. The impetus for “SHO” came via Facebook solicitation from one of Welch’s friends, which led to Skype interviews with producers from Evolution Media, the company that created the “Real Housewives” kingdom of contentious, dish-throwing reality shows. 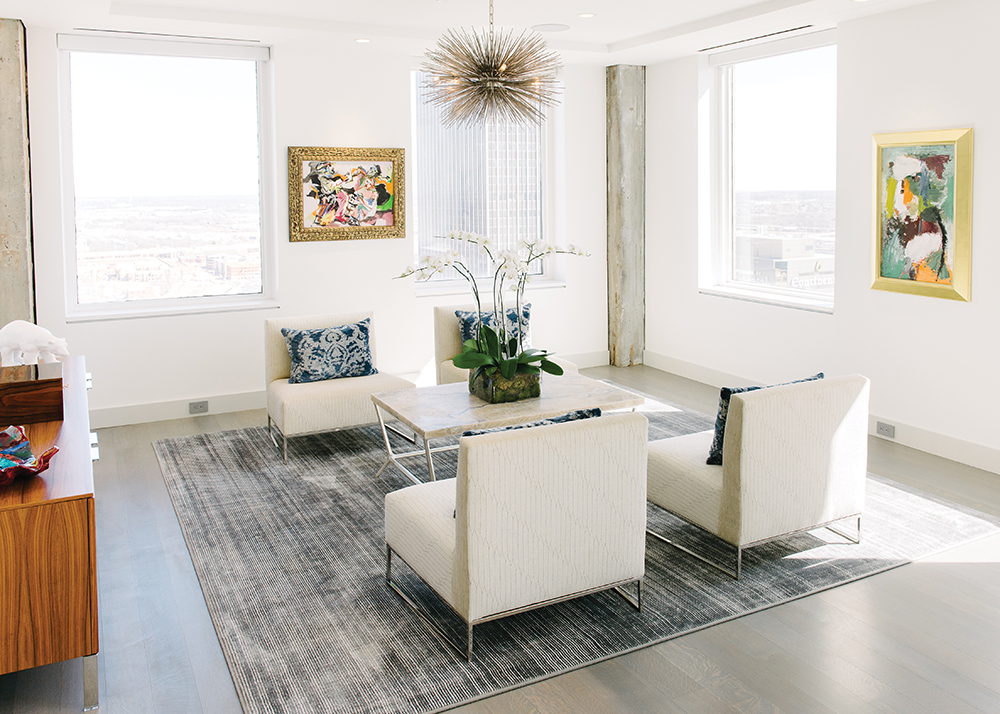 Welch said the meetings were held with almost no expectation on her part – even after Evolution sent a phalanx of camera operators and line producers to OKC to shoot a “sizzle reel,” she thought it would amount to nothing.

Then the call came. Bravo picked up the show for 16 episodes, and announced it was moving 35 people into a production facility in OKC to begin shooting large swaths of Welch’s life. As she recalled, Welch wasn’t especially thrilled with the news: facing the prospect of a media intrusion into her life, she gave the producer a verbal side-eye over the announcement.

“And he goes, ‘This is why they love you guys: you’re actually kind of irritated that you’ve got a show,’” Welch says.

But Welch was able to make “SHO” an anomaly, a good-natured alternative to the series’ hair-pulling Bravo brethren. She compares it to “Seinfeld” in the way that her family and friends interact and react to one another’s eccentricities, and it stays true to Welch’s actual reality. For Oklahomans worried that the show would treat their home state as hayseed flyover country, “Sweet Home Oklahoma” bucked the kneejerk coastal attitude by portraying Welch’s urbane life and progressive attitudes. Rather than force her to ride mechanical bulls or catch greased pigs, Evolution Media followed Welch, Murphy and Pumps to prime local hangouts such as Powerhouse and The Drake, showing the world that Oklahoma City has it going on.

More than that, Welch went all-in with her personal life, which has not always been a bed of well-manicured Nichols Hills roses. For one, she divorced Josh in 2015 after he suffered a series of drug relapses that culminated in the surrender of his law license in 2012. Following the divorce, Josh Welch underwent back-to-back rehab stays in California, after which Jennifer said she saw the man she married. She welcomed him back into their home, which they share with sons Dylan and Roman and their beloved French bulldog, Tubbers. While she is fiercely protective of both family and friends, she wanted “Sweet Home Oklahoma” to be an honest depiction of their lives.

While she occasionally becomes the target of social media ire for her vocal opposition to Pres. Donald Trump, Welch said she hears more good response than bad these days. Just after Bravo announced the show, she saw multiple heckles on Facebook and Twitter from OKC residents fearful of a negative depiction. Now, she said, she’s far more likely to see positive emojis in response to it. There has yet to be an announcement for a second season, but Welch said she feels positive vibes coming from both the network and the audience.

“I know that they like it a lot, because it’s different and it’s fun and it’s relatable to people all across the globe,” she says. “When you get married and you have kids, it’s not Ken and Barbie in the Corvette driving off into the sunset. It’s hard, and the one thing that helps us through it is the human interaction with your friends.”