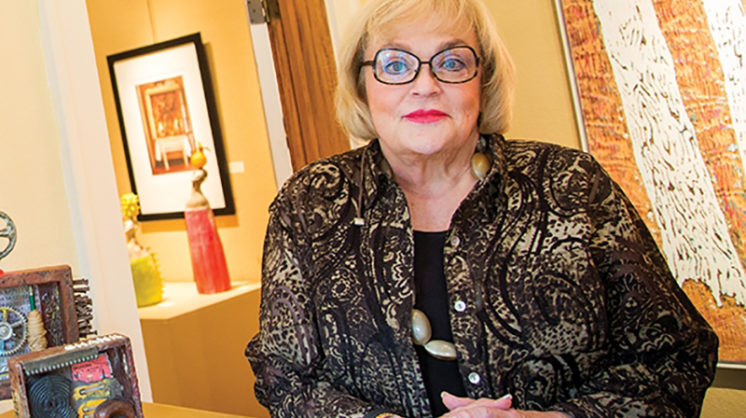 Dr. Joy Reed Belt is no exception. A conversation
with the ebullient Dr. Belt is exactly that: a joy.
The joy-joy-joy-joy-down-in-my-heart kind of joy.

The principal of Joy Reed Belt and Associates, Inc.,
an Oklahoma City-based executive search firm,
Belt is a licensed professional counselor, a voracious reader and amasser of books (paper and digital), an enthusiastic, lifelong learner and the owner and director of JRB Art
at The Elms, an award-winning gallery (and arguably the brightest jewel) in the historic Paseo Arts District crown.

Where did you grow up?

I was born in Louisville, but my father was a pastor, so we lived all over. I went to high school in Ft. Smith, Arkansas.

Is it true that the pastor’s kids are the wildest?

I wasn’t really “wild.” I was probably challenging, in some ways. My father used to say that my curiosity worried him.

Was it hard or sad to move around all the time?

No – I enjoyed it. Because of my father’s job, we would move somewhere new every few years and the church was sort of an instant community.

Ouachita (in Arkansas) for my undergraduate. I was a drama major. For my graduate degree (from the University of Arkansas), I studied guidance counseling and literature. I received a doctorate in interdisciplinary studies from the University of Oklahoma, followed by three years of post-doctorate work at the Menninger School of Psychiatry.

What did you think you were going to be when you went to college?

I was a singer, but I really liked drama and realized that I especially enjoyed the variety that came with the “behind the scenes” part of drama — directing, costumes and makeup. Later, I taught drama, speech, debate and English.

What was your first paying job?

My first paying job was working at a shoe store. I always loved the idea of working. I would also get paid for different singing jobs. I had to sing in church to earn my allowance.

Singing in church would have been much better than my crummy chores!

I really wanted to be a blues singer, but I could not see the path — not from where I was at the time.

What are you obsessed with?

Books! They’re so important to me. I began reading from a very early age. I enjoy everything — fiction, literature, mystery, art … at any point in time, I might be reading five different books. Luckily, I have a Kindle, which I carry with me all the time.

What do you wish you’d started doing long before now?

I don’t know. I see life as three different acts. I’m in the third act now, but I couldn’t be here without acts one and two. What I did then has brought me to this act.

What should people try to do at least once?

Buy a painting or a piece of art they like, just because they like it. It’s amazing how someone will fall in love with a piece and connect with it at a very emotional or visceral level, and then they start to intellectualize it by asking, “Is this good? Is it valuable?” I always tell them, “If you like it, then it’s good!” They should learn to trust the emotional connection, and leave it at that.

My guess is that a lot of people experience that connection, then they leave and the painting haunts them until they come back for it.

That is exactly what happens and when they come back, the painting is usually sold to someone else!

How did your path lead to becoming the owner of such an incredible art gallery?

John (my late husband) bought me a few painting lessons in 1999 because he thought they’d be a way for me to relax. I ended up opening a gallery — he never saw that coming!

Most people remember John as a lifelong supporter and promoter of the arts with a great heart for the community. How long were you two married?

What was the most important character trait John exemplified in 35 years?

Patience. He was an old soul who took the long view on things. Once he identified a goal, he moved toward it and stayed the course, long after most people would have given up. He was also the most positive person I’ve ever known. I miss his wonderful mind. I miss the friendship we shared.

There are a lot of tangible reminders of John in this city. The new “Flamenco” sculpture (at NW 29th and Paseo Drive in the Paseo Arts District) is a stunning tribute to John’s contributions to that community and our city. What goes through your mind when you see that?

I feel fortunate that there are so many tangible reminders of him. Every time I turn at 30th and Paseo and I see all those colorful buildings, it’s like getting a hug.

Were there unfinished projects of his that you’ll see to completion?

Yes. There is a 30,000-square-foot building (in the Paseo District) that he called “The Plunge.” He was in the process of converting it to a multi-use space for artists and theatre groups and local businesses. I’m going to try to finish it. It has to be brought up to code and I’ve had to learn a ton. I should get an honorary doctorate in heating and A/C management, I tell ya!