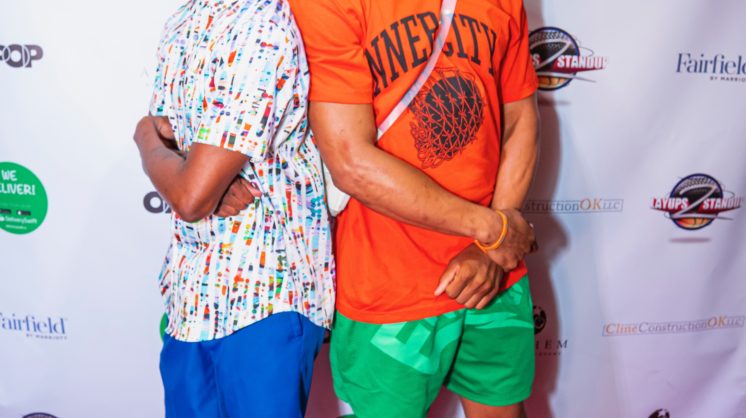 For the first time in the brief history of the Why Not? Comedy Show, when he appears on the Tower Theatre stage on January 10, creator and comedian Demetrius “Juice” Deason will perform his own stand-up set. In all the preceding shows, Deason, who founded Why Not? with former OKC Thunder guard Russell Westbrook, acted as emcee, even with his extensive background in comedy.

“I feel like it’s time to do my own set, so I can show everyone what’s coming,” Deason said.

What’s coming is still in the works, but Deason hopes to host his own comedy special in a couple years, and he’d like to do that in the place where Why Not? began—on the Tower stage.

“Oklahoma City has embraced me, and I think it’s because the city is a lot like me: hard-nosed, blue collar, get your hands dirty and figure things out kind of people,” Deason said. “I think everyone is special, and that everyone deserves an opportunity, and the people of OKC gave me an opportunity even when they didn’t know me. Now, with Russ less involved, they’re still supporting the show.”

Deason got his start in comedy after an injury put an end to his NBA aspirations. He met Westbrook when the two were in elementary school, and both went on to stand-out high school careers in L.A.-area schools. Deason left Leuzinger High School for Pacific Union University, and Westbrook went to UCLA. In 2013, with Westbrook firmly ensconced in the Thunder line-up, Deason was trying to get picked up by an NBA team or a professional league overseas. In the ninth game of the regular season, he hurt his back, and the injury proved to be the end of his NBA dream.

“I’ve been funny, kind of goofy, my whole life,” Deason said. “I experienced homelessness multiple times as a kid, and my mom almost died; there were lots of obstacles, and I overcame them by trying to find the funny in each situation.”

The end of his NBA dream was no different. Deason went back to L.A., and was working in a fast food joint when a friend came calling. “He worked in comedy for years, and he told me he wanted me to come to a show of his.”

When Deason got to the club, he learned his friend had booked him for a set. “It’s a terrifying moment, but once I got on stage, it all made sense,” Deason said. “This was the thing I was meant to do. I went 10 minutes and 45 seconds on my first set, and I still can’t believe it. I just talked about all my frustrations working in a fast food restaurant, and that was enough.”

Like his friend who got him into comedy, Deason has a dream to help other comedians get their start. The Why Not? Comedy Show is part of that, but so is the new club he’s opened in Inglewood, the Open Mic Spot. Throughout his career, he’s stayed connected to L.A.’s underground comedy scene, and people in the business know he’s the kind of artist who likes to help other artists, so he gets referrals, ferrets out new talent, and finds a slot for them on his stages.

“I always want to be genuine in what I do, and part of that is caring about other people,” he said. “We do that through our charity work in the communities where we do stand-up, and we do that by helping other people with opportunities to perform. In OKC, we’ll have a couple of local artists, and some national names, and I think it’s our best line-up so far.”

The show is Friday, January 10 at 7 p.m. at Tower Theatre. Tickets are still available on the Tower Theatre website.