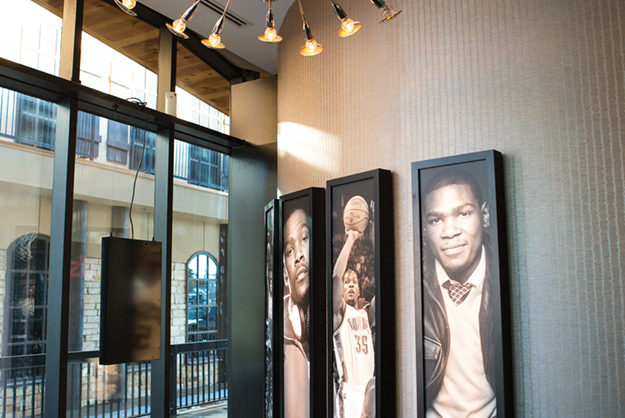 One has played in three Super Bowls and been named to five Pro Bowls and counting; one’s the anchor of a perennial title contender and a five-time All-Star (so far), and currently on the shortlist of candidates for league MVP; both stars have personal ties to the metro. What does that have to do with dining, you ask? Easy: they also each have restaurants in OKC named after them. While both are operated under the auspices of the Hal Smith Restaurant Group, Wes Welker’s near Quail Springs and Kd’s in Bricktown manage to feel individually distinct, each with its own allure for patrons.

The Second Thing You’re Likely To Think On Entering Wes Welker’s Is “Sports Bar.” An open floor plan, enormous bar area right in front of the entrance, lots of wood, lots of polish, masculine color scheme, etc. The first thing you’re likely to think is something along the lines of “Wow, that’s a lot of TVs.” They are everywhere. From where we were seated I could see 20 different screens just by turning my head. I think the total count is 31 but I might have missed a couple. If a sporting event is happening, it stands a good chance of being viewable here.

Assuming you can tear your attention away, wander around to take a memorabilia tour of Welker’s career to date: framed jerseys, helmets and explanatory plaques recount his journey from Charger (Heritage Hall) to Red Raider to Charger again (San Diego), Dolphin, Patriot and Bronco. The OKC native has had a most impressive run, and it’s not over yet – for one thing, he still needs a ring.

A Patriots fan would call the bar “wicked stocked,” since the house honors Welker’s jersey number by offering a total of 83 beers by draft or bottle. The food selection is pretty broad as well: Gourmet hot dogs (including one bacon-wrapped beast), big juicy burgers (I love a good bison burger, and WW’s adds a nice little tang of Boursin cheese to offset its barbeque sauce and fried onions), steaks and other entrees.

The combo platter is worth a look; its rotisserie chicken is quite all right but the ribs are better – tender in the middle, crunchy bits on the ends, doused in a sweet sauce and tasty throughout. I recommend waving off the fries in favor of the tangy coleslaw or mac and cheese laced with a pop of jalapeno.

Cap it off with a sundae (their peanut butter sauce is made in-house) and you are – NOT DONE. NO. Do not, do not leave without loading up on the duck nachos. Seriously … best thing on the menu. The sweet corn and Havarti balance out the punch of the ghost pepper salsa perfectly, and adding smoky slivers of duck breast makes the plate sublime, full stop. Whether you’re out for lunch or just watching a game over a few beers, they are a thing of culinary beauty – enjoy.

While Wes Welker’s Feels Like A Fan Tribute To The Namesake player (and to drinking beer and watching televised sports), Kd’s in Bricktown gives the impression that the man himself was involved in the menu choices and setup. That could just be savvy marketing, but the touches have character: the dinner atmosphere is clubby and low-lit (by the way, love the backlit menus) with a hip-hop soundtrack, and the food is mainly Southern soul – though if you just have to have an $89 steak, they’ll hook you up.

I did not have that craving; we were geared up for Southern chow. Unfortunately, even though it was a cold weeknight on a non-game day, the wait without a reservation was 45 minutes. Fortunately, we were able to sit immediately at the bar and order a full meal with excellent service despite the bustle. And what a meal: the cornbread was excellent, the Soul Rolls (eggrolls stuffed with rice and pork belly) were an unusual texture but interesting and tasty and my blackened catfish – stuffed with shrimp and crab and splashed with a white wine beurre blanc – was just outstanding.

The only thing that didn’t knock me out was the cheesecake, but that could have been because I had just helped my wife with her chicken and waffles, or maybe because most things would pale in comparison to the creamy, cheesy grits.

Here’s the thing about Kd’s: not only is it good, it’s better than it has to be. A restaurant bearing the putative MVP’s name has a certain level of built-in fan base (it had over 10,000 Facebook likes before it even opened) and could probably get away with coasting a little, but if this place serving the same menu had no memorabilia and were called something generic like “The Estate” or “Gentleman John’s,” it would still be great. It’s easy to recommend independent of its association with a local icon, and with this food in combination with the city’s love for its resident superstar, it’s no wonder the place is packed.

I was already aware that I will cry real tears if Kevin Durant ever leaves the OKC Thunder, but now I know that in that terrible eventuality I can at least salve my wounded heart with another helping of those grits. There’s always a silver lining.