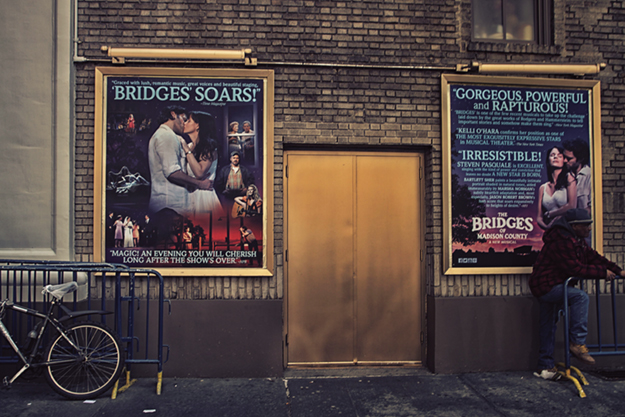 Her Story Reads Like a Script For a Romantic Broadway Musical: spunky tomboy with a voice like an angel, hair like corn silk and a smile as wide as the open plains makes her way from the family farm in Oklahoma to New York City. Destination: Broadway stardom!

In less able hands, the cliché would fall flat. And yet, like most every role she has tackled, Kelli O’Hara makes it work with an alchemy of talent, hard work, determination and the gift of making it all look effortless.

The New York Times has dubbed her “one of the most exquisitely expressive stars in musical theater.” In her latest starring role in “The Bridges of Madison County” – as Francesca, the character played by Meryl Streep in the movie – the Times critic waxes poetic about her utterance of the three-syllable single-word opening that starts the show: “Iowa.”

“When Kelli O’Hara sings that word, a plain place name becomes a prism of rippling ambivalence … you hear both the heady hope of liberation and the hopeless acceptance of captivity. And suddenly, Madison County starts to seem like a far more exciting place to visit than you might have imagined.”

Although the show did not receive a coveted Tony Award nomination for Best Musical, O’Hara was singled out for accolades. The role earned her a fifth nomination for a Tony Award, Broadway’s highest honor. The winner will be announced in a live national broadcast June 8 from the stage of Radio City Music Hall.

Many believe this is her year to win.

A fourth-generation Oklahoman, Kelli O’Hara was born April 16, 1976, and raised on a farm in western Oklahoma, near Elk City. Both sides of her family set down roots on the territorial frontier. Her mother’s grandmother Ethel Snider was born in 1889 in Old Greer County, during a trip from Alabama by covered wagon  by her parents – George Washington Snider and his wife, Martha – to stake out a position for the Land Rush. Ethel would one day meet and marry Dr. Will Husband, who became so beloved by the town of Hollis that city leaders named their hallowed rock-hewn football stadium after him. On the O’Hara side, three Irish immigrant brothers – Michael, James and her dad’s grandfather, Peter O’Hara – first settled near Mangum around the turn of the century, and sent out roots from there.

Kelli O’Hara always loved singing. Inspired by the success of Miss America 1981 Susan Powell – improbably from the same town of Elk City, population 12,251 – she was determined to receive the same vocal training.

The O’Haras moved to Edmond so her father could attend law school, and Kelli O’Hara graduated from Deer Creek, where she studied under drama teacher Dixie Lee Jordan. She followed in Powell’s footsteps and studied at Oklahoma City University with Professor Florence Birdwell, who also mentored the acclaimed Kristin Chenoweth. After her OCU graduation in 1998, she headed for the big city.

She has channeled the grit of her forebears and small-town upbringing in a city of cynics, and made them adore her.  A Google search of her name with the adjective “luminous” turns up more than 14,000 results.

She has inhabited mid-20th century roles – first the ingenue, now the fully grown, conflicted woman – and infused the words and music with such sincerity as to search for new ways to praise her. After her third Tony nomination, in 2008 for her portrayal of Nellie Forbush in Rodgers and Hammerstein’s “South Pacific,” Charles Isherwood in The New York Times gushed of her “unforced sincerity and a reserved tenderness that occasionally blooms into an exuberant joy … she sings with a radiance that is the sound of hope and happiness made manifest, in a voice that could melt the heart of the most unregenerate musical hater.”

On May 3, 2014, Before The Saturday Matinee Performance of “The Bridges of Madison County,” Kelli O’Hara breezed up the stairs and into her dressing room in the Gerald Schoenfeld Theatre.

The theater, then named the Plymouth, is the stage where she made her Broadway debut in 2000, as part of the ensemble in “Jekyll & Hyde.” At the time, this very dressing room was occupied by the show’s headliner: David Hasselhoff.

But now Kelli O’Hara is the star. She takes a seat and an assistant works to secure the wireless mic to her tucked-up blonde hair, arranging the dark wig that would help her become Francesca.
I have one question to ask: Is she succeeding on Broadway not despite her Oklahoma background, but – just maybe – because of it?

The backstage loudspeaker announced 30 minutes to curtain, and Kelli O’Hara chats as she applies her own stage makeup to complete her transformation:

“The truth of it is, you know … there wasn’t cynicism in my life. I mean, I didn’t have … People believed in things, and kind of, dreamed of things.”

She pauses, and looks down for a full 20 seconds as she gathers her thoughts.

She picks up her eyebrow pencil and darkens her brow as she talks of what is important in Beckham County, and how that has shaped her life:

“When you feel a part of something, you’re not going to louse that name up. You take pride in your name. You’re not going to go out and make a lot of trouble. You wouldn’t disrespect your family that way, your grandparents. When you have your grandparents there in the town, having made a life for themselves for 50 years. You’re not going to go get yourself on the newspaper docket saying you got a minor in possession after the football game. I remember feeling that way. I remember thinking, ‘Well, I’m never going to do that. That would be too embarrassing for my family.’

“But also, I had a lot of people inspiring me, people who had come before me. I really think it comes down to that. And my cousins would say the same thing. When you belong to something, then there is worth. You have self-worth. It’s just ingrained.

“Even after 15 years in New York City, I’m still making decisions based on ‘What will they think back home?’ Which is maybe good and bad, because there’s always going to be someone to say: ‘Don’t get your britches too big, you know, because I know where you came from!’

“Honestly, I mean when I moved here I can’t remember how many people – if I had a dollar for everybody who asked me – ‘Well, where you gonna live? What’s your job going to be? Do you have a job?’

“And I’d be like, ‘No. I’m just gonna try … ’ and feeling really nervous about that.

“So the drive, the ambition to get something going just to have something to say was probably one of the biggest pushers I had. ’Cause you had a thousand people being like, well – not so much ‘She’s not going to make it’ – but more like … ‘Well, what are you doing?’

“And you want to be understood. And you say, ‘THIS is what I’m doing. I just got my first Broadway show!’ You know, the dream of being able to say that. I used to dream of that.

“I used to dream less about – and this is actually disclosing a lot about who I am, the kind of person I am, which is insecure in a lot of ways, though I have a healthy ego, but it was less about doing a Broadway show myself and more about being able to tell my family I just got a Broadway show.

“Like winning a Tony. It’s always less about me winning a Tony and more about being able to stand up on the podium and say, ‘Thank you.’
“‘Thank you to all the people who made me believe I could.’

“There are so many kids up here from places like Oklahoma. And I see the same drive. There’s something in us. We’re still dreamers.

“And it starts to happen, to change as you get older, when you live here for a while. I try to keep myself from it. I hang out with people and they’re like, ‘You’re so fresh.’

“We just had this roundtable with the five nominees for Best Actress. Me and Sutton Foster and Idina Menzel and Mary Bridget Davies and Jessie Mueller – who’s become one of my really good friends, she comes from two parents who are actors and all four siblings who are actors. So she grew up with the thought of acting as being a job that you’d better get started with, start thinking about your insurance, and ‘How many work weeks can I get on this job?’ She started out thinking about acting as an obvious, a normal thing you’d go into. A career path.

“And Sutton and I talked about it – she’s from Alabama – we thought about the theater literally as golden, a magical universe that you never even imagined you could reach, but that you were going to go try. I like that. I totally like that I did something like that.

“My husband and his sister grew up thinking of acting like a vocation, something you just do. You make work and you get it done. Which I think sometimes it can hold you back. We’ve talked about that.

“But if you dream, you dream big.”

Best Actress in a Musical as Francesca Johnson, “The Bridges of Madison County”

Best Actress in a Musical as Billie Bendix, “Nice Work If You Can Get It”

Best Actress in a Musical as Nellie Forbush, “South Pacific”

Best Actress in a Musical as Babe Williams, “The Pajama Game”

Best Featured Actress in a Musical as Clara Johnson, “The Light in the Piazza”

Editor’s Note: This is the 22nd installment in a continuing series as author and photographer M.J. Alexander chronicles her travels across the state of Oklahoma.