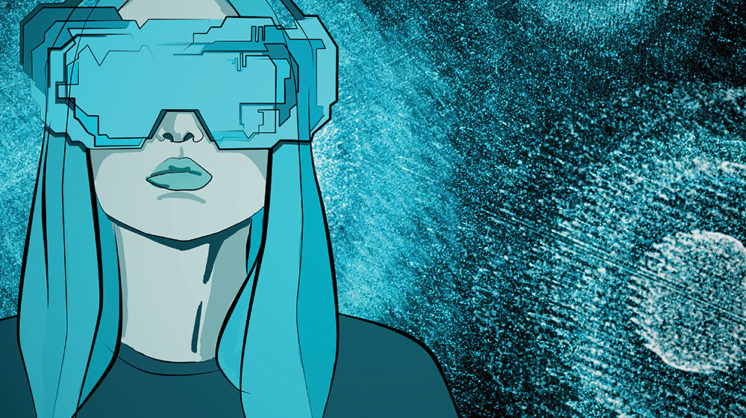 Kim Voynar loves living on the edge. She’s an experiential visual artist, immersive storyteller and award-winning filmmaker with an eye toward emerging technologies, and she’s helping to bring them to Oklahoma.

An alumna of Bishop McGuinness High School, Voynar graduated from UCO with a degree in education and a minor in journalism. After graduation, she worked in education and technology for a few years before launching her writing career.

Her reputation landed her on film festival juries and panels across the country, including SXSW, Seattle, Sarasota, Louisiana, NAB and AFI Dallas. She also became the on-air co-host for “The Daily Buzz,” a public radio program and podcast that broadcasts from the Sundance Film Festival and SXSW.

These days, Kim Voynar is focused on the future. As CEO and chief imaginator at WonderTek Labs in Seattle, Voynar produces Virtual Reality 360 events for film, music and arts festivals. She consults with companies moving into VR technology for the first time, and partners with industry leaders such as Tom Furness, who is considered the grandfather of virtual reality.

“The Oklahoma community seems so supportive of the great arts scene … It is truly inspiring.”

“I love experimenting and pioneering on the bleeding edge where music, film and art intersect with emerging tech,” Voynar explains. “There is nothing more fun for me than collaborating with smart, passionate, deeply creative humans.”

WonderTek Labs also creates films and content in the VR 360 space. Most recently, they were accepted into the Google Jumpstart Initiative program, giving them use of Google’s new Jump Odyssey rig to create Virtual Reality 360 films.

It was the exclusive Google Jump Start Program that led Voynar back home to Oklahoma. Last summer, Voynar collaborated on her first film project in the state, creating a virtual reality piece for a short film trilogy being produced in Alva. She returned home to espouse the gospel of virtual reality 360; she departed enamored of the home she left behind.

“Even though I grew up in Oklahoma, I had never been to the northwest part of the state,” admits Voynar. “I was really impressed how supportive the entire community was of the film crew and the virtual reality technology. Church ladies dropped off cookies; children and adults of all ages signed up to work on the film crew. Then back in Oklahoma City, I was blown away by all of the great local artists. The Oklahoma community seems so supportive of the great arts scene, and the artists that choose to stay and develop their craft here. It is truly inspiring.”

Voynar already has plans to develop a diversity-focused youth 360 filmmaking program in Seattle, Tapestry 360, funded in part by an arts grant from 4Culture. But her positive experience working in Alva has convinced her to focus future initiatives on the next generation of filmmakers working here at home. She’ll be bringing the cutting edge to the middle of Oklahoma.

1 The Art of Styling Your Home
2 NOUN Hotel’s Supper Club Brings Bison and Simple Splendor to Norman
3 Chill Out By Your Outdoor Fire
4 10 Things to Do in OKC This Weekend: September 21-25
5 10 Southwest Side Restaurants You Need to Try Now
6 What’s New This Fall for Visual Arts in OKC?