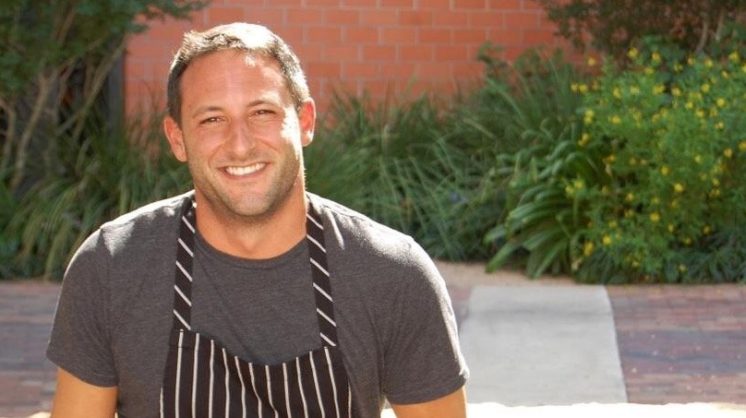 Chef David Gilbert published “Kitchen Vagabond,” a book version of his life story from cooking at home as a kid to working in some of the best hotels and kitchens in the world. The title is appropriate, given that the new executive chef at the Omni Hotel – Oklahoma City, has worked as a chef on three continents, and the Caribbean. He worked most recently in Dallas, and it was in Texas that he received his James Beard Foundation nomination for Best Chef: Southwest.

He assumed his duties at the OKC Omni two weeks ago. Describing his new job is pretty simple.

“I oversee all the food in the building,” he said.  “Outlets, in-room service, and events.”

It’s an easy description of a massive undertaking. The hotel has more than 600 rooms and seven food and beverage outlets, ranging from a coffee shop with locally sourced pastries to the fine dining of Bob’s Steak & Chop House – a corporate partner with Omni Hotels. Four of the outlets opened Jan. 26, and three more will follow depending on seasonal issues and processes. 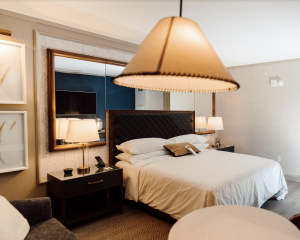 “By opening a few, we get a chance to grow more steadily,” Gilbert said. “We can adjust and make changes slowly, get processes down, and have a better picture of what we can expect – guestwise – during a COVID year.”

One component of his role is to develop relationships with local vendors, a practice of Omni hotels in every location. Park Grounds, the aforementioned coffee shop, sells pastries and other sweets from Norman-based La Baguette Bakery.

“I’m a strong proponent of leadership acting collaboratively,” Gilbert said. “I’ve been connecting and networking with vendors and local food producers to build relationships so we can get to work and support local businesses.”

That support has extended to sussing out favorite dining spots. He’s already found Northern Noodle House and Szechuan Story. His time in Southeast Asia formed a passion in him for Asian cuisine and given that he found and loved two of our best local Asian eateries, he seems to have a nose and palate for what’s good.

As for working with the locals, he’d like them to know that the size of their operation doesn’t matter as much as their willingness to work with Omni and the team. “We can take small volume,” he said. “We want to help small businesses grow, so we’re happy to introduce our guests to those products even in small quantities at first.”

Gilbert said he’s enjoyed the diversity of the concepts he’s working with, too. “My background is fine dining, but I’ve loved the challenge of shifting my focus from a burger joint to a coffee shop to a steakhouse. It’s something new all the time.”

Asked which of the seven concepts is likely to be his favorite, he diplomatically praised all of them, then admitted he’ll spend a good deal of time in the OKC Tap House, a two-story sports bar directly across from Chesapeake Arena with local beers, televisions aplenty, and outstanding bison nachos and harissa octopus. The wings are a two-day process of brine, char and slow grill. The tamarind barbecue sauce that accompanies them is a nod to his love for Asian influence.

Learning a new city means learning what people love to eat locally, and what heritage means to a city. Some of this is done by researching local eateries, tasting foods around town and listening to customer feedback – all of which Gilbert has done and is doing.

“I love that we’re able to bring heritage into the space,” he said. “We created an amenity around Native American flatbread for people to order in their rooms. It comes with a recipe so they can recreate it when they get back to wherever home is.”

Gilbert’s first trip to Oklahoma was in December, so he’s still learning about us, but he’s also very direct about how much he likes what he’s seen so far. “I was pretty shocked about what I found here, from the niche neighborhoods to the Asian District. I traveled, lived and worked in Asia, and the food in the district is impressive.”

Until things slow down, Gilbert is living in a room above the restaurants. He’s trying to find a place close to downtown, and not just to be close to work, but because he’s also been impressed with the activity and options all over the urban core.