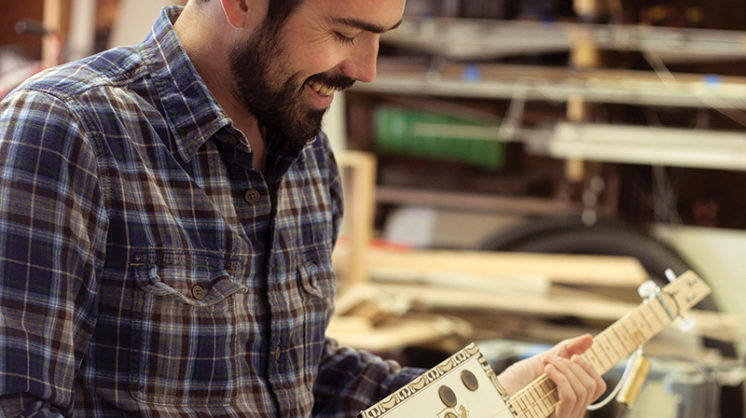 Lightnin’ Hopkins, the great American blues guitarist and songwriter, once described how he acquired his first guitar. “I got me a guitar of my own when I got to be 8 years old,” Hopkins says. “I got me a cigar box, and I cut me a hole in the middle of it. I take a little piece of plank. Nailed that to the cigar box. Got me some screen wire.”

The audio recording is still available today, and in it, Hopkins gives the most basic of methods for constructing a cigar-box guitar. Whereas many origin stories are simple – birth, parentage, location – the history of objects created by the poor because of their poverty is more difficult to trace. Cigar-box guitars were instruments of necessity for budding musicians too poor to buy a “real” guitar, but who first made one, and where and when, are all questions lost to history.

Hopkins was not alone in growing up with a cigar-box guitar. It would be difficult to find an early to mid-20th century blues musician who did not at least play one. Muddy Waters and B.B. King both grew up playing them. Some music historians believe early blues and jazz were both shaped by the variety of unusual sounds that a musician can create with a makeshift guitar and slide. 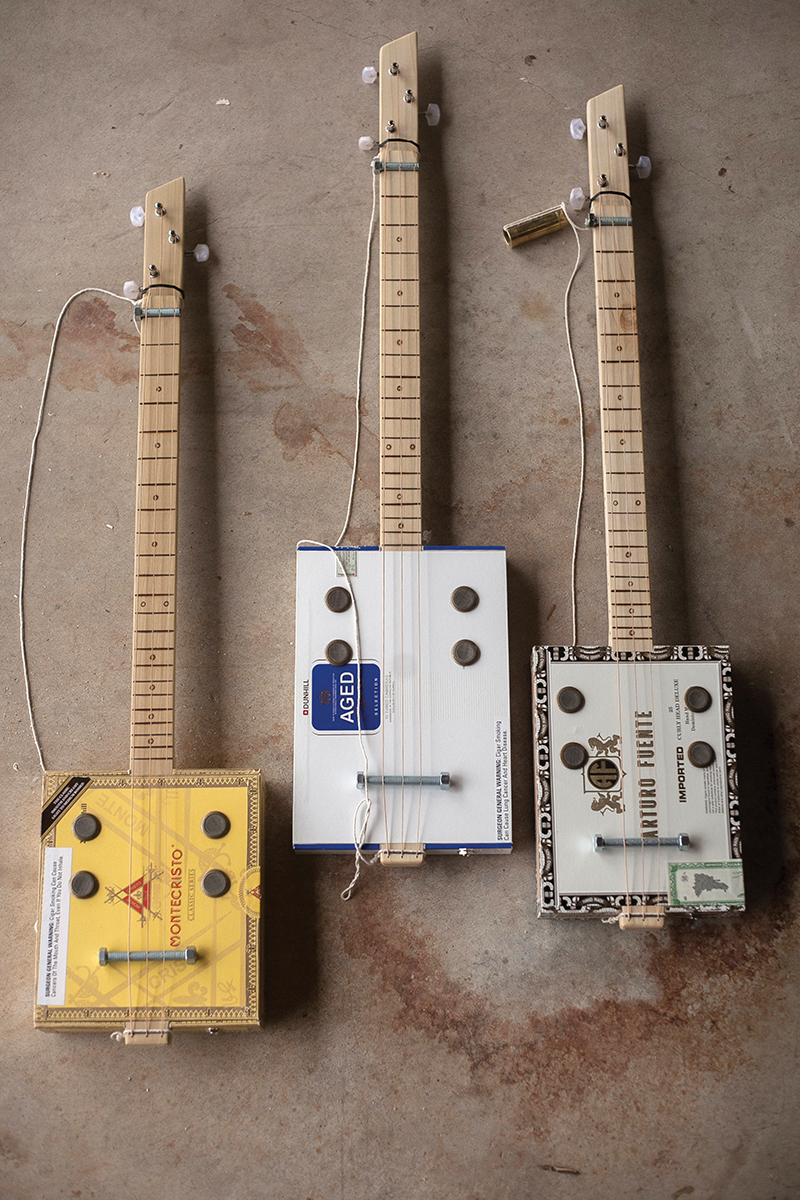 Kyle Reid, the frontman and founder of Kyle Reid and the Low Swinging Chariots, became a fan of swing while pursuing his degree in physics at the University of Oklahoma. That a young man would suddenly find himself enamored of a style of music that was developed a half century before his birth helps explain why Reid was also captivated by cigar-box guitars.

“I saw liner notes from a Tom Waits album – I don’t remember which anymore – and the notes mentioned a cigar-box guitar,” Reid says. “It sounded great, and I thought, ‘I can do that.’”

The discovery of the Waits notes corresponded with a time post-graduation when Reid wanted to begin building things again. He had been an avid builder prior to college, and his parents still had a garage full of tools. By combining the itch to build with his newfound fixation with the guitars, Reid was able to satisfy both areas of interest. 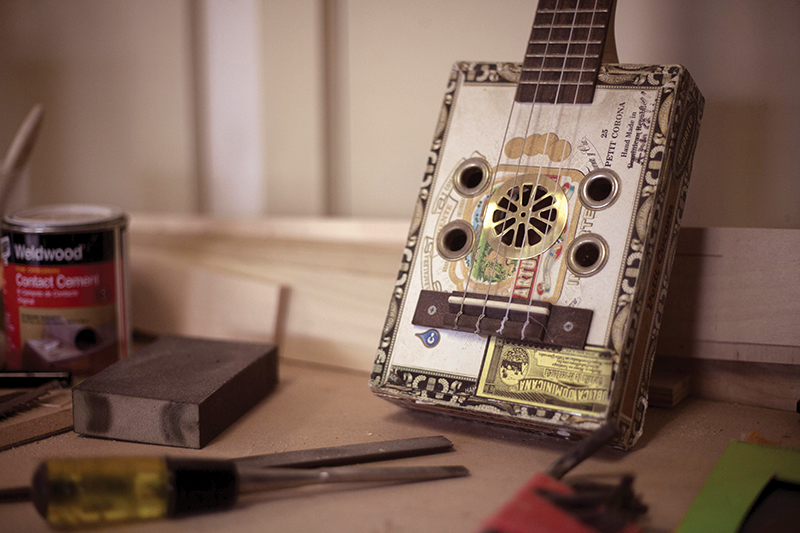 “I decided on a 3-string guitar because I liked the idea of being forced to be creative,” Reid says. “With only three strings and no frets, there are very few accompanying notes, so the chords have to be more simple.”The instrument relies on a slide – Lightnin’ Hopkins used the neck of a soda bottle – and music historians believe it was the origin of the modern slide guitar. Without frets, the slide controls transitions between notes. As for the construction, Reid said materials do not make a great deal of difference.

“They’re basically junk, hodgepodges,” he says. “That’s where they started; musicians would construct a guitar out of whatever was available.” Indeed, watching Jack White knock together a primitive version from a heap of scraps was a highlight of the guitar-driven film It Might Get Loud.

Reid uses sturdy cigar boxes. He said he keeps going back to Arturo Fuente and Don Tomás. The former is made from a wood laminate, so it is even sturdier than the heavy cardboard typically used to construct cigar boxes. Oddly enough, there is almost no discernible difference between the sound generated with wood laminate or cardboard as the resonator. 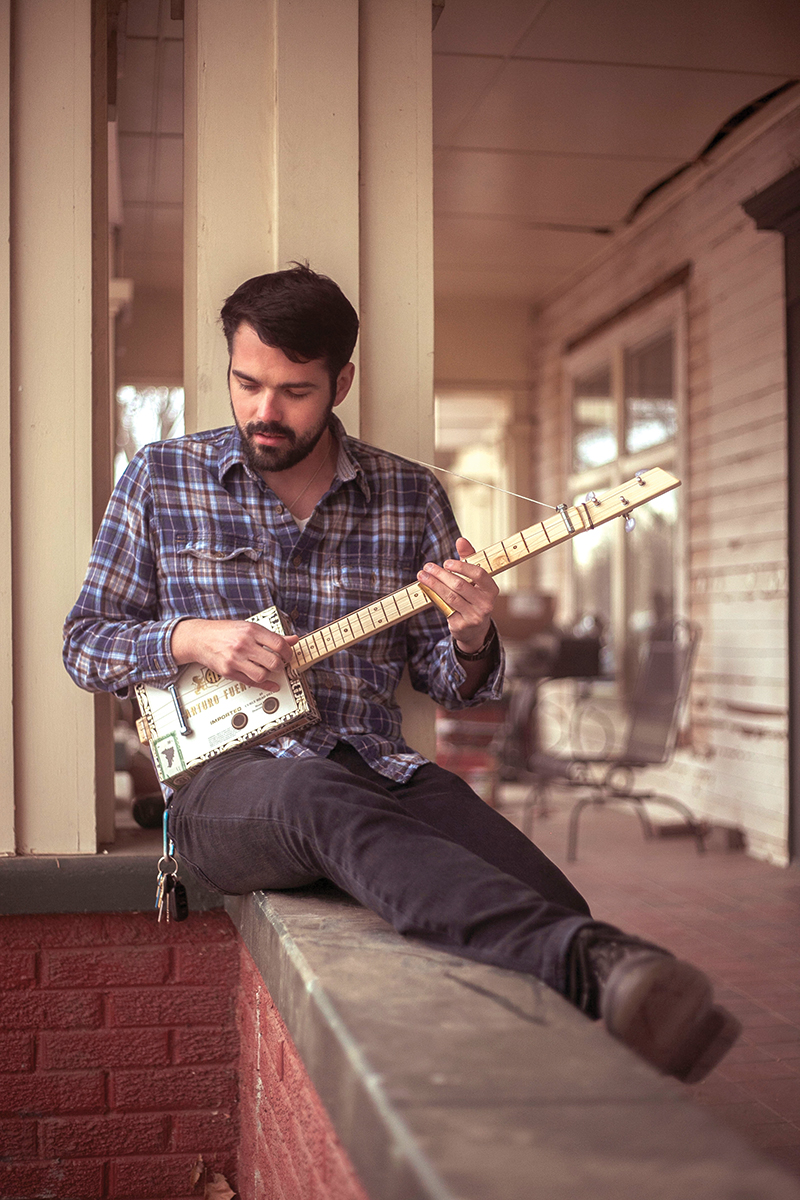 For the neck, Reid uses 1-foot-by-2-inch poplar. Why? “It’s what was available,” he says. Again, it’s a hodgepodge, and the piezo pickup, which allows the user to plug the instrument into an amp, helps add volume but not clarity, so the material simply doesn’t matter.

Reid’s new EP “Don’t be Afraid” features four instrumental originals performed on his cigar-box guitar. The EP is available for sale on his website, kylereidmusic.com, and for streaming on Spotify.

The 3-string is Reid’s preference, but he will make them according to customer preference, too. Ordering is very straightforward on the Kyle Reid Music website, and he has sold dozens of them to people around the state – but not to his singer-songwriter or musician friends.

“I kind of prefer that,” Reid says. “It means they have to invite me to play with them if they want the cigar-box guitar sound.”