Landscaping for Fronds With Benefits - 405 Magazine 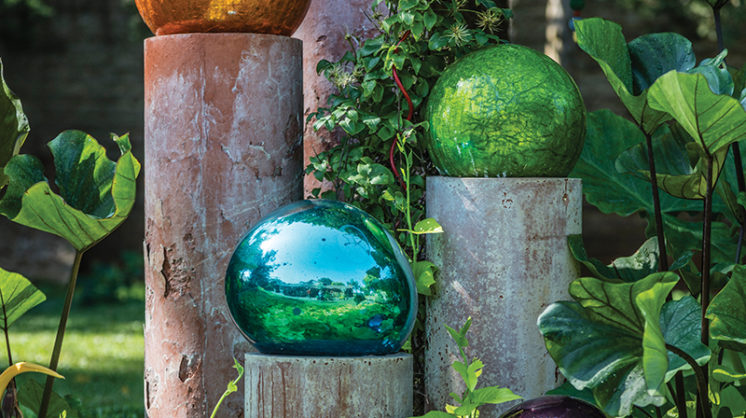 A smooth expanse of lush green lawn is a hallmark of suburbia; as much a part of our mental picture of Americana as a picket fence or a mailbox next to the driveway. But it’s also a bad idea ecologically, especially in climates where nature tends to encourage other kinds of foliage. If you look beyond Bermuda grass, you’ll find a whole world of more environmentally friendly beauty.

Quentin Bomgardner, one of the founders of the annual Norman Music Festival, recalled a flight he took into Las Vegas several years ago. As the jet descended toward McCarran International Airport, he looked down at the rows of suburban homes that lie beyond the Las Vegas Strip, and he saw green lawns.

Green lawns, in a city where the average air temperature reaches above 95 degrees four months out of the year. Without extreme intervention (chemicals and intense irrigation), most turf grass will turn to dust in those conditions. From a horticultural standpoint, Las Vegas yards are the worst-case scenario: the path of greatest resistance most people travel when maintaining supernaturally green lawns filled with nonindigenous grasses and plants.

Bomgardner remembered that image when he started looking at landscaping options for his central Norman residence known as The Chouse. Built in 1926, The Chouse was formerly the St. Thomas More University Parish, but was converted into a residence in 1981 and later became the home of the late photographer Tom Lee.

Bomgardner wanted to create a sustainable and responsible environment around his home, one that was low maintenance and appropriate to central Oklahoma’s environment. Today, The Chouse is surrounded by indigenous short grass, fruit trees and other plants that, once they are established, are essentially self-sustaining. They simply need the level of precipitation provided by Oklahoma’s environment.

“Native plants look more natural — things that are drought resistant, absorb runoff and look awesome,” he says. “It helps with the soil erosion, but more than anything, these are plants that are well adapted to the weather we’re subjected to. Once we get them established, during a typical summer we don’t have to water them at all. You’re also not out there with your lawnmower, burning gas to take care of it.” 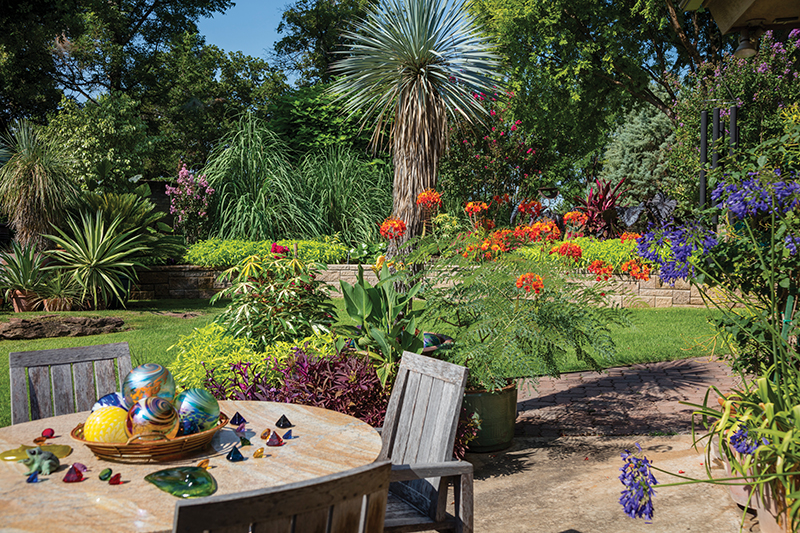 Landscaping With a Dash of Rock ‘n’ Roll To facilitate this change, Bomgardner turned to another veteran of the Norman music scene for help. Before he designed ecologically sound landscapes, Adam Sarmiento was a member of New Tribe, a popular Norman jam band in the 1990s that recently reunited after 20 years for a series of shows and a new album. But when New Tribe called it quits in 1997, Sarmiento decided to redirect his energies.

“Around the time of New Tribe starting to dissolve, I got a summer job with a guy in the Newcastle area who had an organic garden, and he paid me to tend that garden,” he says. “Then, around the same time, my girlfriend at the time and I decided to move out to the West Coast.”

Sarmiento took several internships and apprenticeships in Oregon and Northern California, and then established Eco Landscaping in Eugene, Oregon, in 1998 — while continuing to learn as much as he could about sustainable agriculture and horticulture. When he returned to Norman in 2002, he brought the business with him, and refocused on the plants that work best in the plains of central Oklahoma.

In Sarmiento’s front yard in the historic neighborhood north of the University of Oklahoma campus, a mixture of indigenous buffalo grass (bouteloua dactyloides) and curly mesquite (hilaria belangeri) covers the lawn, having been allowed to grow longer during the cold winter months. During spring, those grasses take on a green-gray hue and can be cut, but they only need to be mowed once or twice a year — a bonus for homeowners who tire of Saturday mornings spent lugging trimmers and exhaust-belching lawnmowers.

The benefits don’t stop at cutting and maintenance. The grasses Sarmiento planted at The Chouse and in his own yard have roots that grow 3 to 15 feet deep. Compared to Kentucky Bluegrass with its 6-inch deep roots, there’s an obvious benefit to growing grass that is fully adapted to dry summers and that can obtain water yards below the surface.

“So, these roots are actually building soil,” Sarmiento explains. “There are all kinds of benefits, plus it’s graceful-looking and inviting. It’s a stepping stone to a prairie — a shortgrass prairie.”

The demand for this kind of landscaping is growing: Sarmiento said he and his team have enough work to keep them constantly busy, and new companies are springing up to meet the demand for more environmentally conscious landscaping options. 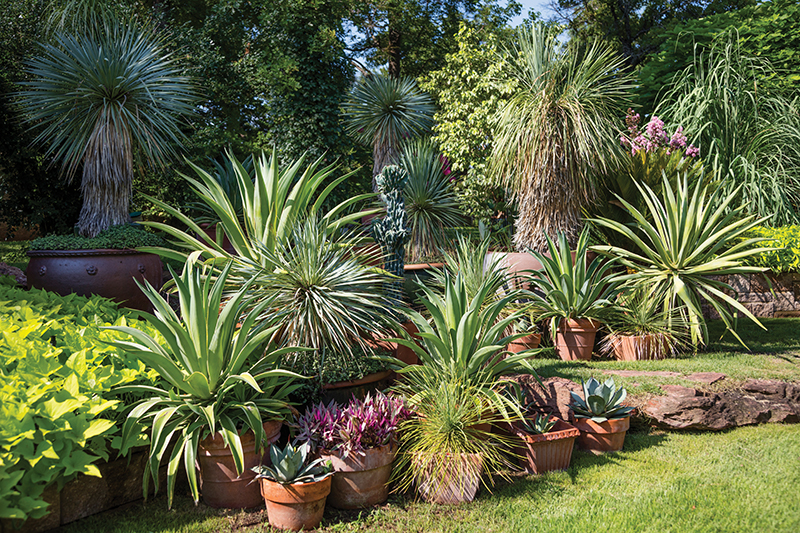 Helping people make those changes can be daunting, given that most homeowners are creatures of habit, and so many neighborhoods have covenants dictating a degree of uniformity. But many people simply don’t need covenants to maintain uniformity.

“Most people just think aesthetically,” Sarmiento says. “We have sort of built-in inertia about the choices we make: ‘We’re going to have a lawn here; we’ll have flower beds there.’ The difference in the way we think is creating a functioning ecosystem that doesn’t require a lot of inputs from us and a lot of maintenance from us.”

Murder by Monoculture Sarmiento continues, “One big thing for me is that, across the country, we’re removing native landscapes and creating a monoculture of the lawn and the shrubs. In the process, we’re taking away the character of the land itself. We’re losing our sense of place.”

And that monoculture has a particularly nasty side effect: It’s killing off species like the monarch butterfly. The disappearance of indigenous milkweed in the area, which the U.S. Fish and Wildlife Service identifies as the butterfly’s only host plant for laying eggs and the sole source of nutrition for monarchs in their larval stage, is reducing their population. Sarmiento prefers planting milkweed and other indigenous plants for their sustainability, but also because imported plants are useless to the local food chain. By nature, humans like to exert control over their environment — but that environment isn’t just theirs to control.

“We have aesthetics that we’ve developed over the last 100, 200 years,” he says. “There is a definite fear element: We fear nature and we want to control it.”

But lecturing people on the need for change can only go so far. Sarmiento said he prefers to show homeowners how native plants can enhance their lives. For one client on College Avenue, he installed plant groups representing three different Oklahoma microenvironments, including a more arid environment with succulents near the street, a more forested area in the back yard and one area for growing wheat — enough to produce sufficient flour to bake a loaf of bread every week throughout the year. 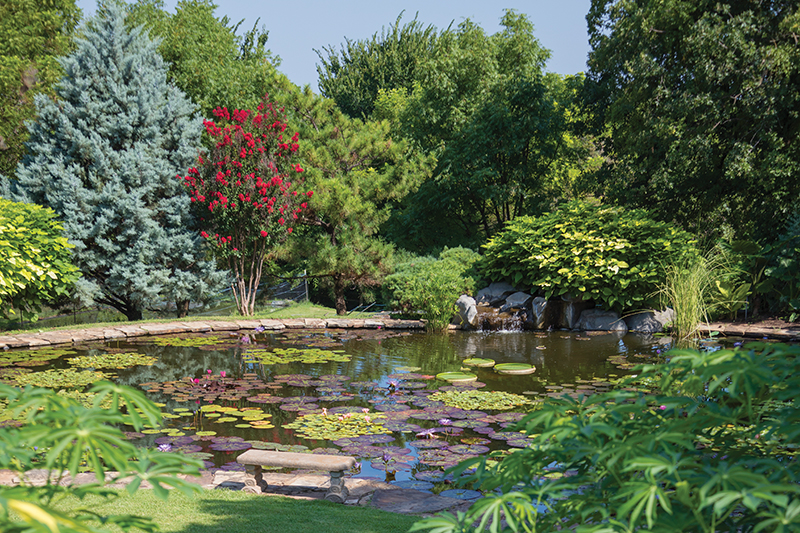 “In Oklahoma, we have the most ecoregions of any state,” he says. “So we can identify microregions on our properties that we can emulate.”

Those include fruit trees. As part of The Chouse project, Sarmiento planted several edible fruits, vegetables and herbs along with milkweed and indigenous grasses. The cost of putting in native plants can be daunting initially, but Sarmiento said the cost is generally zeroed out after one year by the money saved on watering and trimming. After that, the homeowner’s bank account, the environment and the hard work of maintaining a traditional yard receive a well-earned break.

Plus, some of it can be eaten.

“I’ve got figs, pomegranates, strawberries, oregano and a few things like that,” Bomgardner says. “You’re not going to sustain yourself, but nothing tastes better than a fresh strawberry that you just picked.”

The Sound of Silence

A Newfangled Breed of Yard-Care Machinery

Humberto Manzano started his own Oklahoma City-based company, Apple Valley Eco-Landscapes, in September 2016 after years of working in the energy sector. His company specializes in organic fertilization and weed control, and helps customers make the transition to native plants and sustainable landscaping, but what differentiates Manzano from many yard services is how utterly quiet his teams are: Every trimmer and mower they use is battery-powered.

“It’s not like what you see at the commercial stores,” Manzano says. “There’s no noise, no gas.” Comparing the machines sold at home stores to what Apple Valley uses is like comparing golf carts to Teslas. He was inspired to take an eco-friendly approach after a long day of trimming his own yard with gas-powered appliances.

“The noise was so high, and the weed eater was so hot, that I wanted to do something about it,” Manzano says. “I’d been trying to do organic fertilizing for the past few years, and so I thought it would be a great idea to do organic fertilizing with battery-powered trimming. We want the people who are concerned about the environment — those customers are our target.”

How Much Green Do You Want?

Not all ecologically conscious landscaping plans will break the bank — in fact, there are options for nearly every homeowner’s price point. Adam Sarmiento of Eco Landscaping in Norman suggests some options for homeowners who believe that “green” is more than just a color.

$15,000–$25,000: Beyond the first two levels, nonporous hardscaping can be replaced with porous hardscaping such as crushed granite. Additional native plant beds and food-producing areas can be installed, and the irrigation system modified for greater efficiency. Rain catching systems and gardens are also great options.