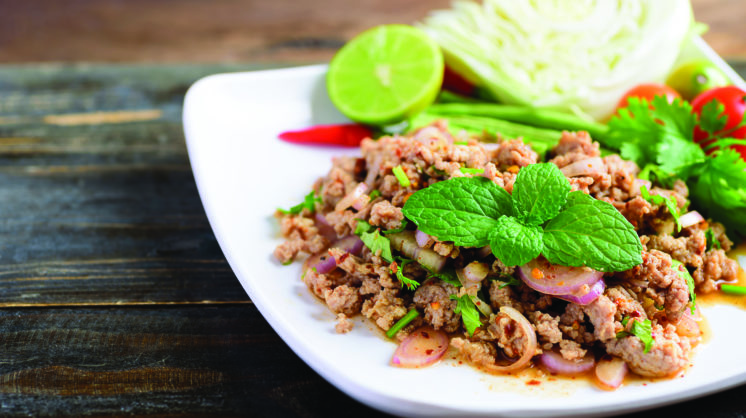 While its geographical neighbors – Vietnam to the east and Thailand to the west – have flourished in the American culinary landscape, Laotian food has had a difficult time finding traction. A mountainous, agricultural country, Laos entered the American consciousness during the Vietnam War, and many Laotian immigrants were resettled in the U.S. after the war.

Many of the dishes associated with Thai cooking have Laotian cognates, especially papaya salad and egg rolls. Thus, Laotian food was often sprinkled on Thai restaurant menus or appeared as the Thai version only. KC Chansombat, chef-owner of traditional Laotian restaurant Queen of Eggrolls at 2815 NW 10th, said the Westernized versions of much Thai cooking buries the original style of the food.

“Thai for Western audiences has too much sugar,” Chansombat says. “Thai food tends to be sweeter anyway, and it uses a lot of coconut base, whereas Laotian food is more reliant on herbs and fresh vegetables.”

Larb (pronounced “lahb”) is one of the staple dishes for celebrations in Laos, and it’s a delicious entry point for American diners. Fish larb is a popular choice back home, but Chansombat said beef and chicken dominate in the U.S. market. The dish relies on a citrus punch from fresh lime juice to brighten the palate, but the lack of sweetness and burst of umami and acid is a refreshing change of pace.

“I started the restaurant to show how distinct Laotian food is,” Chansombat says. “I’ve stayed as traditional as possible, but staying traditional means that people are sometimes afraid to try Laotian food for the first time.”

With names such as pho, pad Thai, kung pao and spring rolls becoming part of the common tongue for Asian diners, the name “larb” lies far outside traditional menu vernacular. With familiarity often determining what people order, putting larb on a menu practically guarantees that only the very adventurous, or those already familiar, will order it. That is unfortunate.

The combination of minced chicken or sliced beef with lemongrass, Thai basil, galangal (in the ginger family), cilantro, mint, green onions and chilis creates an absolute explosion of intense flavors, spicy or mild.

“I tell guests that Laotian food has a base heat of about three out of four,” Chansombat says, “so be aware of that when ordering. If you want milder, you need to specify.”

To adhere to the traditional recipe, Chansombat includes gizzards in the minced chicken. It’s a practice learned in a culture where meat is scarce and expensive, and so the whole animal is used in cooking. The gizzards add another layer of texture and a darker, richer flavor the to the mince.

Larb is typically served with rice, but for a different presentation, Four J’s Diner at 2920 S Agnew features Laotian and Thai cuisine, and owners Alex and Bouakham Panhguay serve their larb salad-style. Whether intentional or not, the dish is easy to eat as an impromptu lettuce wrap. Both ways are delicious.