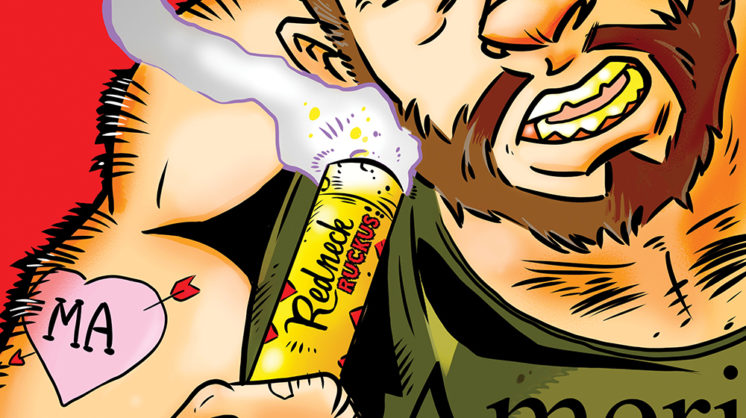 Against every law of common sense, I still have some of last year’s fireworks in the garage. Standing two feet tall among the punks and sparklers is a box labeled “Lock and Load,” a noisy firestorm of 24 hardcore shells, each with a short fuse. On the side, a supplementary label announces, “Barely Legal!” Admittedly, that probably added to its appeal. On the back, a red warning – “Do not place head over tube” – doubles as an unapologetic contradiction to natural selection, as if warehousing fireworks in the garage weren’t enough of a recipe for disaster.

As some of history’s most efficient devices for finger removal, fireworks are rather aggressive on their own, and the names have become much more threatening than when I was little. I don’t know who comes up with them, but I’ll bet they’ve been in training for the position for years – one after-school fight (or arson) at a time.

I think I’d enjoy naming fireworks. I’d go back to cheery names that do little to warn the consumer that gunpowder and fire will take off your face. Instead of Attitude Adjustment, my flaming brocade would be called Dancing Waterfall or Late-Night Lasik. Instead of Big, Fat Hissee Fit, I’d name the big finale The Star-Spangled Burner. Maybe I’d just name the pyrotechnics after the result they produce, like Screaming Shingle Burner, Toddler’s Terror or Party Crasher.

Not all fireworks live up to the hype of their names, unfortunately: The Redneck Ruckus hardly rose to the occasion during last year’s festivities. Wrapped in a box covered with descriptors such as “raw,” “explosive,” “powerful” and “action-packed,” the Redneck Ruckus packaging practically cried out for a Lee Greenwood accompaniment, but turned out to be little more than a $28 fizzle. A Redneck Rip-off.

The barely legal Lock and Load, on the other hand, surpassed all expectations for a spectacular flaming display. Instead of the glittery wave of family-friendly pink and lemon stars advertised on the back, it went rogue, spewing a comet of gunpowder as it hastily pointed itself right at the neighbors’ drunken hot tub, screaming the entire length of its voyage toward the oblivious revelers next door.

Once its Scud-missile-like explosion had sounded, 10 car alarms went off like a chorus – unless that was merely the ringing in our ears. We fully expected to be arrested before the echoes had faded, but we weren’t. Instead, we had a lit punk, obnoxious neighbors who were now even louder and 23 more power-packed, heavy duty, mega shells remaining. What to do, what to do …

Over the past year, those neighbors, in their own annoying way, have prompted what has now become a ceremonial lighting of the punk, which has taken the original inventory of 24 shells to about half a dozen. Nothing says “your music sucks” louder or more efficiently than a sonic boom over your back patio at 1 a.m.

This Fourth, we’ll forget about the neighbors and come together as Americans, united by our shared appreciation of fireworks with names such as Fire Starters, Bad Decisions and Parole Violations. Names that mean one thing on Independence Day: Let freedom ring.

During the other 364 days of the year, they mean, “Hey, man, turn down your stereo.”