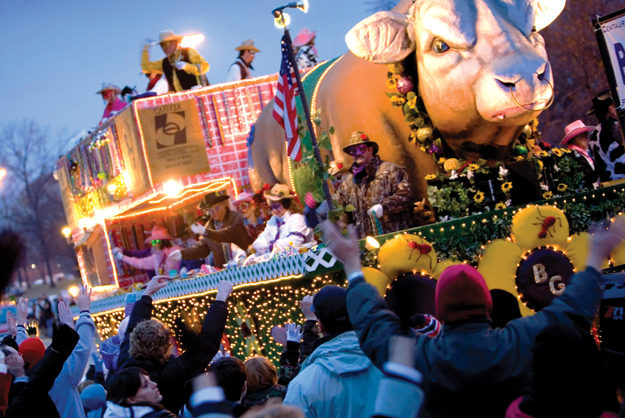 Get your Mardi Gras mask on and, in just over a six-hour drive, you can be in the heart of a whole different world! There’s a lot of Mardi Gras magic and loads of great food in Shreveport, Louisiana.

I love the “everybody welcome” atmosphere of the celebrations in the Shreveport-Bossier City area. The carnival season kicks off with the Twelfth Night party on January 5 and takes its last gasp on Fat Tuesday, February 12. That’s the day of the Krewe of Aesclepius Children’s Parade and, late that night, celebrants gather on the Texas Street Bridge over the Red River to toast the end of Mardi Gras.

Krewes (Mardi Gras organizations) promote the seasonal celebration with parades and parties. The biggest parades are organized by the Krewes of Centaur (February 2) and Gemini (February 9). The Krewe of Barkus and Meoux gives pets a chance to parade (February 3) in party finery.

Spectators line the parade routes – some camp out in advance with lawn chairs – but once the event starts, most are on their feet with hands in the air. The shouts of “Throw me something, mister!” echo up and down the pavement.

Visitors wanting closer contact go to the float-loading parties before the parades. Volunteers help hang the thousands of strands of beads that will be tossed to the crowds. The local priest blesses the floats, beer flows and a great time is had by all.

The Highland parade (February 10) is a neighborhood event in the historic Highlands area. I love the mix of participants – everything from kids on bicycles and walkers in funky costumes to giant professional floats. This is a real local gathering and you have a great chance of getting a bunch of good “throws.” They toss everything from beads and small toys to wrapped hot dogs complete with mustard packets.

The parades and float-loadings are free; other events have a charge. You can even go to one or more of the balls for the price of a ticket.

It’s Louisiana, so you know you’re going to get some great grub, and two of Shreveport’s most inventive chefs – Boz Baucum and Michael O’Boyle –  have very different takes on food.

Robert “Boz” Baucum is owner-chef at Marilynn’s Place, a repurposed Texaco station. The classically trained Shreveport native was blown back home by Hurricane Katrina. His goal – to bring New Orleans cuisine to Shreveport.

His cool, casual restaurant is the place to go for po’ boys (from traditional to po’ boy burgers), jambalaya, gumbo, etouffée, bread pudding and beignets.

Boz’s February 10 blow-out bash is a tribute to his mom, Marilynn, and her love of Mardi Gras. He says, “Ours is a big, kid-friendly, parking-lot, Mardi Gras extravaganza. It starts as soon as folks catch the last string of beads at the Highland parade. We encourage them to head on over to Marilynn’s for crawfish, clowns, face-painting, bands and beer.” The party lasts all afternoon and into the evening when it finally winds down at 10pm.

Michael O’Boyle is the owner of the Gulf Pig Underground Dinner Club. Don’t look for his restaurant, though; you won’t find it. He hosts “secret” suppers in a variety of local restaurants, taking advantage of their kitchens on their nights off. About once a month, diners with reservations are directed to the location where they have no idea what they’ll be eating. But it’s guaranteed to be good – and unusual. Michael says, “I try to have one dish at every meal that pushes the envelope.”

The menu I sampled: a crabmeat profiterole; fried chicken liver on potato and popcorn puree topped with green tomato kimchee; corn and lemongrass soup with garlic, shallots, cilantro, grilled shrimp and enough cayenne pepper to wake up the palate; pork belly braised in Coca-Cola and bourbon on griddled cornbread topped with deep-fried collard greens; a frozen watermelon palate cleanser and ice cream with chocolate ganache and kumquat sauce for dessert.

Adventurous diners won’t regret the pre-planning needed to enjoy one of these underground dinners. Prices for the dinner hover around $55 with alcohol extra. What a deal!

Speaking of food, Fertitta’s muffy is a local food icon. Built by the Sicilian patriarch of the family, Fertitta’s started out as a grocery. In the ’60s, the neighborhood was changing and the Fertittas started adding sandwiches. The New Orleans-Sicilian muffaletta was a big winner. Sam Fertitta couldn’t afford enough neon for his sign to read “muffaletta” so he shortened the name to “muffy,” and it remains so today. The business, still in the family, is on the National Register of Historic Places.

The Municipal Auditorium, a late ’20s Art Deco building, is also listed on the NRHP. It was here that the announcer for the “Louisiana Hayride” radio show told the audience, “…you’ve never heard this young man before, but one day you’ll be able to tell your children and grandchildren that you heard musical history made tonight.” Yep, Elvis was in the building. Tours include exhibits of country greats who appeared here and you can stand on the spot where Elvis stood.

Drive the film trail. Dozens of movies have been filmed in Shreveport. See the sites, and then check out the cool Robinson Film Center. Catch a movie or try the bistro for lunch or dinner.

Try your luck at one of the riverside casinos.

Shop at the Louisiana Boardwalk on the Bossier City side of the river.