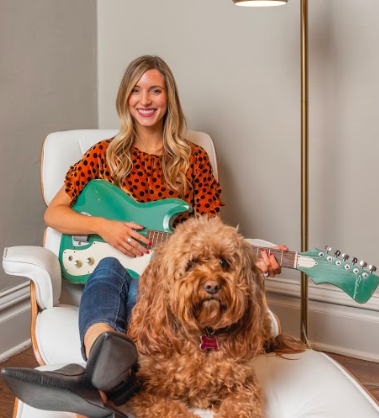 The sounds of music regularly fill this 110-year-old Mesta Park home, but brightly colored guitars and vintage musical décor transform that theme into a visual one that conveys musician Madison McCoy Rosser’s love for the art.

McCoy Rosser, who lives here with her husband, Robert Rosser, displays guitars and other instruments she has collected through the years – many signed by artists such as Trace Adkins, Josh Turner and Blake Shelton. A vinyl record player sits on a vintage record stand, and by her bed is the first guitar she had, which she calls “Perry” after singer Katy Perry. Eleven years ago, McCoy Rosser performed Perry’s “Thinking of You” on the stage at the Rodeo Opry in her first performance. She was 17 years old.

A primary focal point in the home is a guitar collection that hangs along a wall in a small narrow room toward the front of the house. This room doubles as a studio where McCoy Rosser teaches guitar, piano, voice and ukulele lessons and records her own music.

And like the story behind every instrument in her collection, the house itself has a musical history, at least in recent years.

Steven Drozd, who has been with the Flaming Lips since 1991 as a drummer, keyboard player, bass guitarist and songwriter, lived in the house prior to the Rossers. He also worked on his music in the studio – hanging guitars along the wall. He could see the sunset as he worked on music on his computer in that room.

Drozd said he composed a cover of the Beatles song “Sgt. Pepper’s Lonely Hearts Club Band” for a specific project, and started the Flaming Lips’ song “We a Famly” in that room.

“I’m always working on a Flaming Lips song,” he says.

A vintage green Stratocaster guitar that Drozd gifted to McCoy Rosser when the couple moved into the house hangs on the wall. She said she walked into the house as they moved in four years ago, and saw it sitting on the mantel.

“They (Drozd and his wife) were so gracious, and left this guitar for me as a housewarming gift,” McCoy Rosser says. “What I love is what he said.”

Signed with his name, “The Flaming Lips” and the year – 2015 – Drozd wrote, “I wanted to pass on inspiration with this. Hope you love your new home.”

The narrow studio room used to be a porch, and still has the original transom window over the door that now leads to the Rossers’ dining room. The window, which once was used to let outside air from the porch into the home, still opens and closes.

Also featured throughout the house are its original leaded glass windows and working transom windows downstairs, as well as a heavy and original pocket door between the front drawing room and the family room. The Rossers decorated the 2,800-square-foot home in a mid-century modern style with a vintage flair, with help from McCoy Rosser’s mother, Susan McCoy. Vintage touches include a washstand that McCoy Rosser’s great-grandmother brought with her from Illinois during the Oklahoma 1889 Land Run.

What first attracted McCoy Rosser to the house was the narrow room that now serves as a recording studio, classroom and musical inspiration. But the Rossers have made use of every room since those earliest days, including a closet where they store their collected books.

“I loved everything about it, but especially the music studio setup, which was perfect for me,” she says. 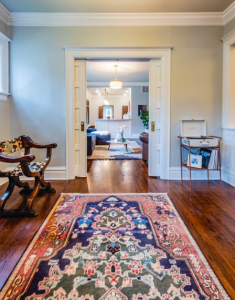 When you walk through the front door of the Rossers’ 1909-built Mesta Park residence, you can see all the way into the home’s living areas, including a renovated kitchen and a comfortable living room for entertaining and relaxing. 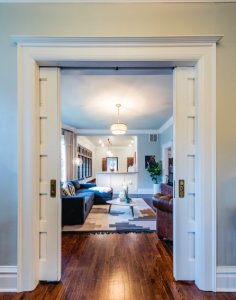 Step from the front room into the living room, where the Rossers removed a wall and opened up the space to include the renovated kitchen. 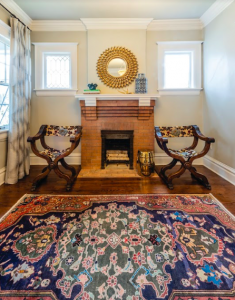 The front room of the Rossers’ home features 19th-century Renaissance-style wood chairs that were an estate sale find, as well as the home’s original windows and fireplace. 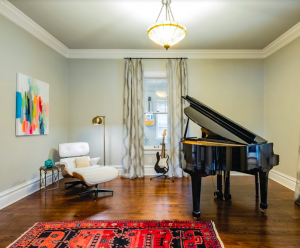 Art by local artist Sara Kay hangs above an Eames chair and overlooks a vintage hand-knotted Persian rug in the front room where Madison McCoy Rosser teaches piano lessons. The window offers a peek into the now-enclosed porch where Rosser teaches guitar, ukulele and voice lessons, and records and practices her own music. The Rossers have a collection of guitars scattered throughout the house, many signed by prominent musical artists. 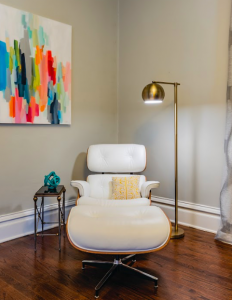 Art by Sara Kay and an Eames chair. 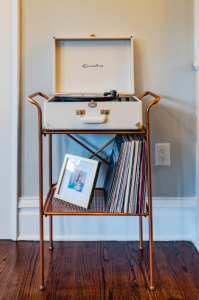 Music and musical items fill the Rossers home, decorated in a mid-century modern style with a vintage flair, as seen with this record player on a vintage record stand with vinyl albums stacked below it. 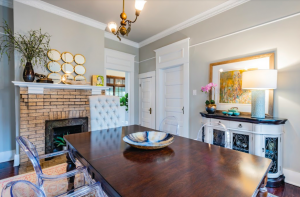 The Rossers turned this room, where Steven Drozd once had his piano, into their dining room at the suggestion of the Drozds. The ornate “wedding cake” crown molding is repeated throughout the house; the original fireplace is framed in ornate metalwork. 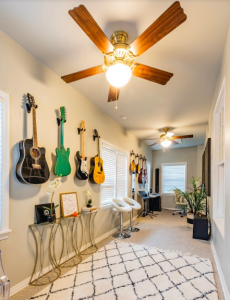 Musical magic happens in this room, which was once a porch but was enclosed years ago. The home’s former owner Steven Drozd and current owner Madison McCoy Rosser have both used this room to create music. Signed guitars, including a green one that Drozd gave Rosser as a housewarming gift, flank the room’s east wall. 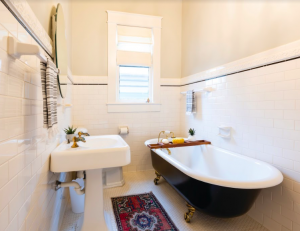 This tiled guest bathroom features some of the home’s original fixtures: a cast-iron pedestal sink with brass faucets and a claw-footed tub. 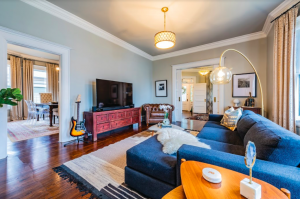 The home’s former owners suggested to the Rossers that they turn this room into a living room instead of the dining room, which they did in addition to removing the wall between it and the kitchen. Now it’s a cozy living room and a good spot for gathering during parties. 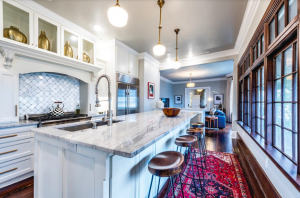 Marble countertops and wood trim highlight this kitchen ready for entertaining and cooking, which the Rossers like to do. (for 14 – The home’s original windows in the kitchen face the east.) The Rossers added the wood trim to match the original triple crown molding found throughout the house. 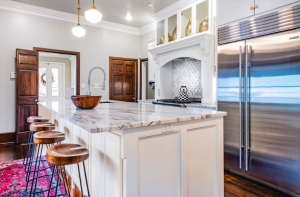 A wall once closed off the kitchen from the next room, but the Rossers removed it in order to give the home a more open look and so they could include guests in the kitchen festivities while entertaining. Madison McCoy Rosser hosted her students and their families for an open mic night, serving food from the kitchen counters while the students performed. 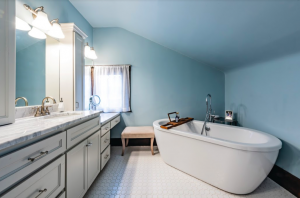 The Rossers’ artfully decorated bedroom includes the first guitar she had, which she calls “Perry” after singer Katy Perry. Eleven years ago, McCoy Rosser performed Perry’s “Thinking of You” on the stage at the Rodeo Opry in her first performance. She was 17 years old. 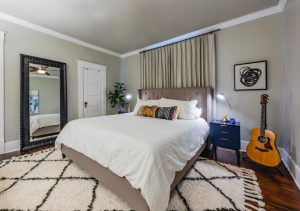 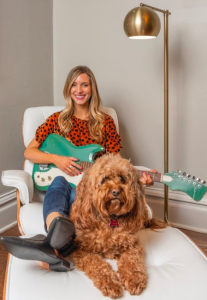 Madison McCoy Rosser poses with the guitar that the home’s former owner Steven Drozd, musician with The Flaming Lips, signed and left for her as a housewarming gift. McCoy Rosser plays and teaches multiple instruments, but her primary instrument is guitar. Also pictured is Sophie, her mini goldendoodle.