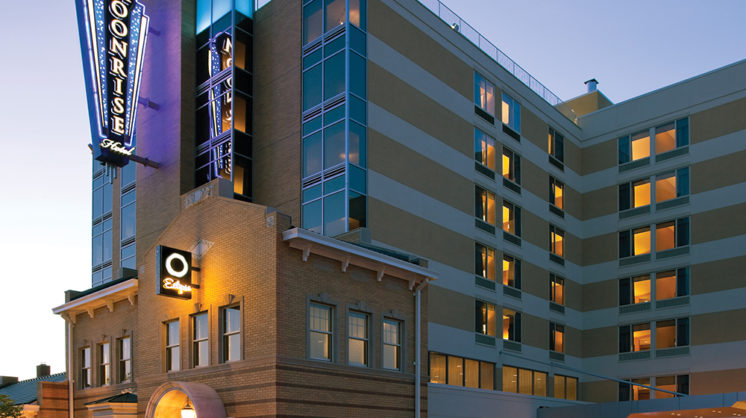 If you’re a Scrabble player, you have a one-in-a-3.9-billion chance of using the word “syzygy” (75 points if you can play it on a triple word score) in a game. If you’re in St. Louis on Aug. 21, you can sprinkle it freely into your conversation. On this date, the sun, moon and earth will be aligned in syzygy – a fancy way of saying “a straight line” – producing a solar eclipse.

So what’s so special about St. Louis? A good portion of its southwest metropolitan area will be in the area of totality, a 70-mile-wide path where the moon completely covers the sun.

By the time the eclipse reaches totality, it will be almost as dark as night. Birds cease singing and the temperature could drop 10 to 15 degrees. The eclipse lasts several hours, but the time during which the moon completely blocks the sun lasts only a few minutes.

While solar eclipses are not rare events, being in the path of totality is rarer. St. Louis has not seen a total solar eclipse since 1442, when there was no St. Louis there to see it. So the town is getting ready for a big party – and praying for clear skies.

Although just outside the path of totality, the Delmar Loop in St. Louis is a must for stargazers of all kinds. The Duke of Delmar is Joe Edwards, whose genius, investing in businesses and rallying residents brought the fallen-on-hard-times thoroughfare back to life in the ’70s. The area, close to prestigious Washington University, is now a lively mix of boutiques, galleries, bars and eateries, with clientele as varied as the cuisines on offer.

One of Edwards’ most spectacular enterprises is the Moonrise Hotel – a sleek boutique wherein contemporary elegance is blended with displays of space memorabilia. From Buck Rogers to moonwalkers, Edwards’ collection includes more than 1,000 toys, Art Deco items, Russian artifacts and personal paraphernalia from America’s heroic astronauts. His most valued item is a patch that went to the moon with Apollo 11 astronaut Michael Collins.

Overlooking the rooftop bar – and a grand view of the city – is the world’s largest, man-made, rotating moon. That rooftop will be the site for eclipse watching, with special glasses for safe viewing, of course. The drink of the day will be the Eclipse – a sunny orange cocktail – and Clementine Creamery is creating Eclipse ice cream made with black cherries and purified ash.

Edwards’ passion spills out onto the sidewalk where made-to-scale signs over several blocks give walkers information about the planets and their distances from the sun. Stars stud the sidewalks saluting famous St. Louis citizens from Ulysses S. Grant to Stan the Man Musial.

This street was named “One of the Ten Great Streets in America” by the American Planning Association. Blueberry Hill, Edwards’ first Delmar creation, is a must-stop, as great food, live music and displays of more of Edwards’ collections of pop culture items ranging from Roy Rogers to record jackets make this a feast of taste, sight and sound.

This six-block stretch is home to 60 restaurants, 10 galleries, 40 shops, 12 entertainment venues and a vintage trolley system. Delmar’s not only hot – it’s sizzlin’. 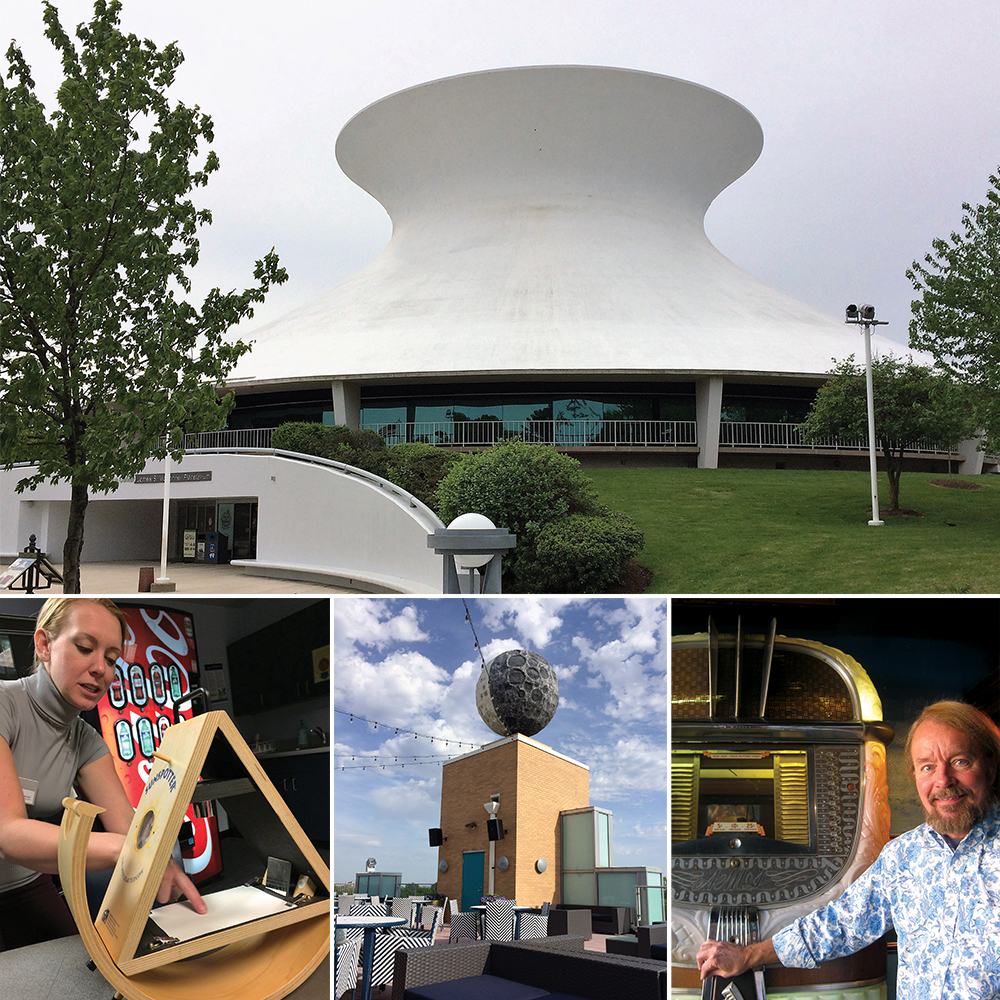 • The McDonnell Planetarium (left) houses the planetarium, as well as other exhibits – including “The Discovery of King Tut,” which will run through Jan. 7, 2018.

• Joe Edwards, entrepreneur and Big Daddy of Delmar, shows off one of his classic jukeboxes at Blueberry Hill.

• The Rooftop Terrace Bar at the Moonrise Hotel offers spectacular views and drinks.

For scientific background on the eclipse, head to the McDonnell Planetarium in Forest Park – they’re currently running a great sky show, “Live Sky: Eclipse.” The 40-minute presentation tosses around words like “analemma,” “ecliptic, “apogee” and “perigee” along with history going back to the Babylonians and Sumerians. Younger viewers will pick up the main gist while more sophisticated guests may get the finer points … although I must confess, I was in the gist group in spite of my years. There are experts to answer questions after the show, and everyone receives special glasses for safe viewing on the 21st.

All the experts stress the danger of looking directly at the eclipse without eye protection. Regular sunglasses won’t cut it – you need glasses with polymer film infused with carbon or aluminized mylar material.

The planetarium also has two Sun Spotters – wooden, folded-Keplerian telescopes that use an arrangement of mirrors to project an image of the sun onto a viewing screen – and filtered telescopes for daytime viewing. The weekend of Aug. 19-20 will be devoted to a science fest around the eclipse, while the 21st will feature a smaller event with live streaming of the path of totality. (The planetarium is 2,000 feet off the actual path.)

Let the Rest of the World Go By

So if you’re not in St. Louis, will you miss the show? The path of totality actually crosses the U.S. from Oregon to South Carolina, but everyone (weather permitting) in the country will be able to see a partial eclipse. According to Lindsay Thomas at Science Museum Oklahoma, “Oklahoma City will experience approximately 87 percent obscuration at approximately 1:07 p.m.”  Metro residents are invited to view the eclipse from 11 a.m. to 3 p.m. at the museum, where planetarium staff will help guests view the eclipse through special telescopes that allow users to look directly at the sun. For anyone else wanting to see the eclipse safely, glasses are available in the museum store, along with the book Get Eclipsed: A Complete Guide to the American Eclipse.

Don’t Rain on My Parade

What happens if it’s cloudy on Aug. 21? There’ll be a lot of disappointed people. I suggest you have a back-up plan: Stock up on Moon Pies, rent Under the Tuscan Sun and listen to R.E.M.’s “Man on the Moon.” Be patient; you’ll have another opportunity in 2024.

To make a simple device for safe viewing of the eclipse, check out  How to Make a Pin Hole Camera.