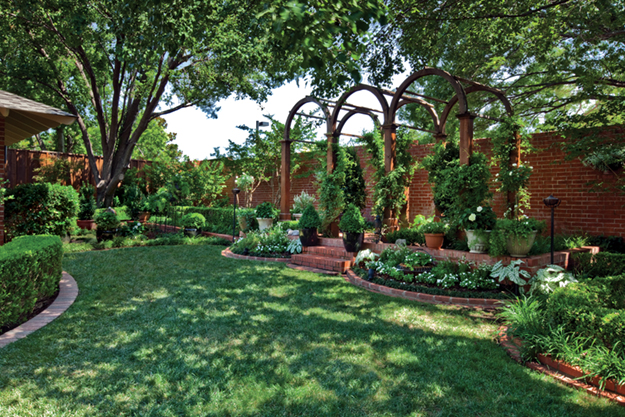 THE CAMERA MAN RAISES HIS HAND AND STARTS THE COUNTDOWN: “And we are live in five, four, three, two … ”

Under the bright TV lights, the news desk has become a second home for one of Oklahoma’s most beloved and trusted journalists. Linda Cavanaugh has been a fixture on KFOR-TV for more than 35 years. She has comforted viewers through some of Oklahoma’s most horrific times, and laughed with us at the lighter side of life.

But when the lights go out and the work day is through, Linda heads for her sanctuary. It’s her own private retreat where she can escape the harsh realities of her profession. Her backyard garden is full of tender plants, cozy nooks and crowned with a magnificent wooden arbor. This environment welcomes her home as she sheds the TV persona so many of us have come to love.

“My garden really is my oasis,” Linda says. “White is my favorite color, and there are a couple of great reasons I have an all-white garden. First, I don’t have to think when I shop for flowers. White goes in the cart; other colors don’t. White is also a great choice for our yard because there’s so much shade. White blossoms are like miniature lights that brighten even the darkest corners.

“Plus, when I come home after our 10 o’clock newscast, I love the way the moonlight reflects off the mounds of white flowers,” she added.

Linda grew up in Oklahoma City, and had plans to be an elementary school teacher like her father. But a journalism scholarship to the University of Oklahoma led her down a different path.

“In those days I had no intention of working in television,” she recalls. “Most of my experience was in print journalism. I had worked for Redbook magazine in New York, United Press International, and the Oklahoma Publishing Company by the time I graduated.

“When I had my diploma in hand, I gathered what savings I had and headed to Europe with a girlfriend to backpack across the continent. I remember running out of money in London and handing out brochures on a street corner to get money for lunch,” she says. “We stayed in hostels and ate a lot of cheese and bread, but we did have a good time.”

Back home, Linda married her college sweetheart, Will. As they began a life together, it was also time to start a career. The only type of media she hadn’t tried was television.

“I made an appointment with the news director at Channel Four, which was the only station my family watched, and I asked him for a job. He wisely pointed out I had no television experience, and I naively pointed out that I wouldn’t get any unless he hired me.

“So we reached a compromise. He allowed me to come to the station – with no salary – and learn what I could from going out with the reporters and photographers. It was the best education I could have received,” she said.

Linda was hired as a reporter/photographer in 1977, and a couple of years later she became the station’s first female anchor.

Around that time, Linda and Will moved into their home, which is the same house they share today, and the place where they raised a son and a daughter. They are empty-nesters now, and when it comes to chores around the house they have a special arrangement.

“My husband and I have a deal,” Linda says with a laugh. “He cooks. I garden.”

“I caught the gardening bug when Will and I bought our first house. I went to a local nursery and bought yellow mums to put in front of the porch. From that moment on, I was hooked,” she says.

Linda says her green thumb came from her parents, who both loved flowers. “There are peonies, iris and bulbs that bloom in my parents’ yard to this day that came from my grandmother’s garden in Norman. The plants are easily 50 years old. They just keep coming back. I believe there’s a life lesson in there somewhere.”

“We do have a circle of close friends, but much of our entertaining is family-based,” Linda says. “Two of my three sisters live within a couple of blocks of my house. It’s a gift to have them that close – and also a source of friendly competition when it comes to gardens.

“Linda Vater [the gardening guru on Cavanaugh’s 4:30 p.m. show] also taught me how to put together potted plants. She treats them like a flower arrangement. You need something that draws your attention – the ‘thriller.’ Then plants that spill over the side – the ‘spiller.’ And finally something to fill out the rest of the pot – the ‘filler.’ So when I am plant-hunting in the spring I just have to remember ‘thriller, spiller, filler.’ That makes it simple.”

After so many years of coming into our living rooms, many of us have a certain image of Linda Cavanaugh. But away from the TV lights, a different version emerges.

“The Linda who putters around in the garden is quite different,” she laughs. “I am unrecognizable. No make-up. No cell phone. Just me and the dirt. And I am always dressed in a long-sleeved sweatshirt – even when it’s 100 degrees – to keep mosquitoes from feasting on me. Every time I step out the door it’s like Thanksgiving for them.”

Living in the same house for 35 years has allowed Linda the luxury of seeing her plants and her garden grow to maturity.

“There is something relaxing about putting your hands in the ground – planting something you think is beautiful and then watching the plants thrive. I love art and I love photography. For me, a garden is a natural canvas just waiting for different shapes and textures.

“My yard is also a reminder of people who are important to me. I can sit under the shade of the tree my dad helped me plant 25 years ago. And that makes it all a very special place.”