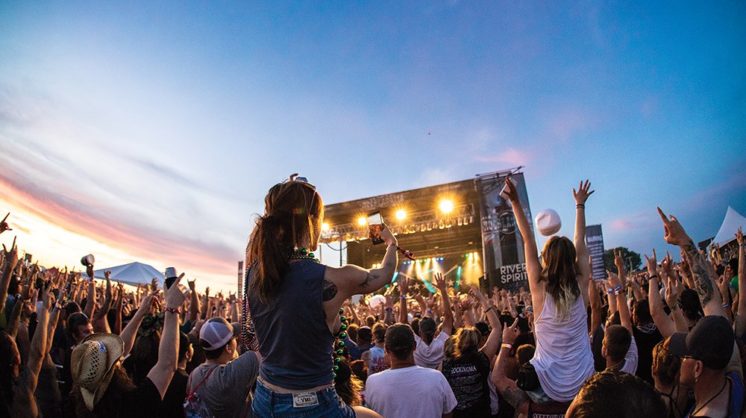 More than three decades ago, on July 3, 1986, my good friend Scott Booker and I drove south to Austin to experience the second Farm Aid mega-concert. Booker, who’s now the manager of the Flaming Lips and CEO of the Academy of Contemporary Music at UCO, was actually giddier to see our then-favorite band Green on Red the night before. Though I realized too late that my Mustang was covered with OU Sooners stickers and we were in enemy territory, it was only moments before we were high-fiving Texans and drinking Lone Stars straight out of the box. The festival spirit was already starting.

The day itself was long, loud and brutally hot – I was fried to a crisp and Scott’s hands had turned Pantone 184, and at one point in the evening, I commandeered a box of Tetra Paks filled with water and started pitching them to the crowd like I was Donald Trump tossing rolls of paper towels in Puerto Rico – but the concert? It was amazing. Craziest lineup I’ve ever seen. A reappearance of Green on Red wearing the same clothes they had worn the night before, The Bellamy Brothers, The Blasters, Steve Earle, Bon Jovi, Willie Nelson, Neil Young, X and of course, Don Johnson with Dweezil Zappa!

Driving back the next day, sunburnt and exhausted, we reflected on the positives: All-day music festivals have the capacity to bring people from all backgrounds and makeup together. Music of all different genres can co-exist on one stage. People enjoying music provides total equity. Everybody can enjoy a good song.

This year in Oklahoma, music lovers will have an opportunity to experience a multitude of live festivals that are dedicated to showcasing the power of music. Whether it is the blues, jazz, roots-rock, hard rock or indie tunes, there’s a bevy of chances to experience a day of outstanding music.

A few points of advice: Wear sunscreen. Support local vendors and food trucks. Most festivals will have plenty of food choices and drink stations. Most of these events are free but check out their websites on what you can bring and what you can’t. Most of all, enjoy the company of your friends. You’re about to experience memory-making events, and that is a gift you can cherish forever.

And remember some sage advice given in “Union Man” by the great Neil Young: “Live music is better!” 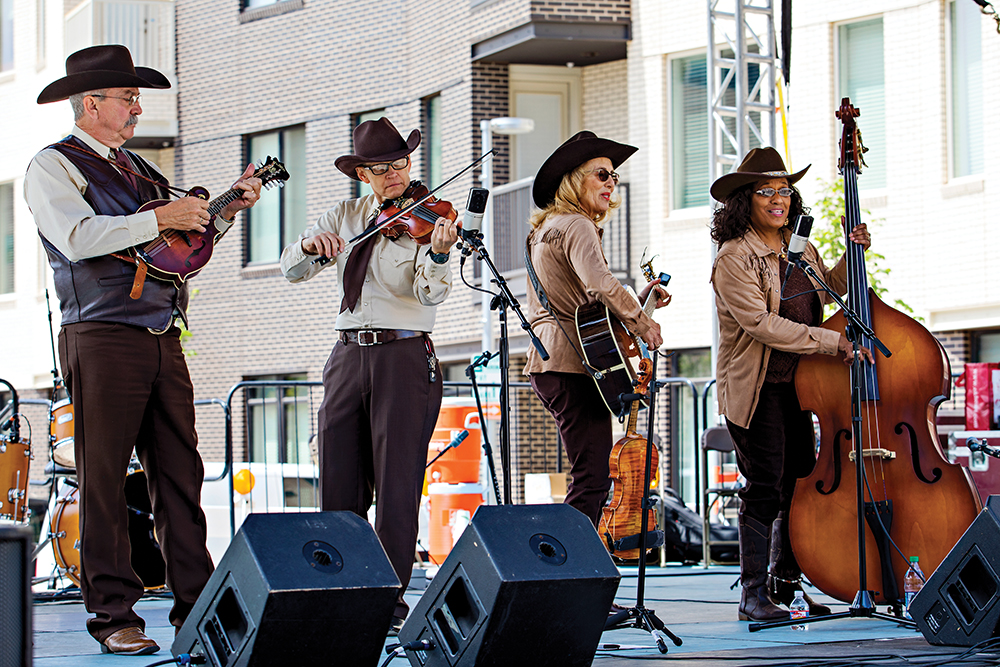 Festival of the Arts

Since its inception, the Festival of the Arts has been a fantastic showcase for music and entertainment. Three stages established around Bicentennial Park provide non-stop performing art, from jazz to hip-hop to dance.

“Festival of the Arts is a celebration of diversity. However, the acts do need to be family-friendly, as it is a free public event,” says Holly Hodge, communications director for Arts Council Oklahoma City.

Juggling more than 300 performers over six days and three stages is no easy task. “It can be very difficult due to the limited number of spots, volume of applicants and various factors,” Hodge says. “Luckily, we have a staff liaison, two event co-chairs and a dedicated committee to help the process go smoothly and ensure that we produce an amazing experience for the performers and attendees.”

Plus, of course, you also have food and art and great people-watching. 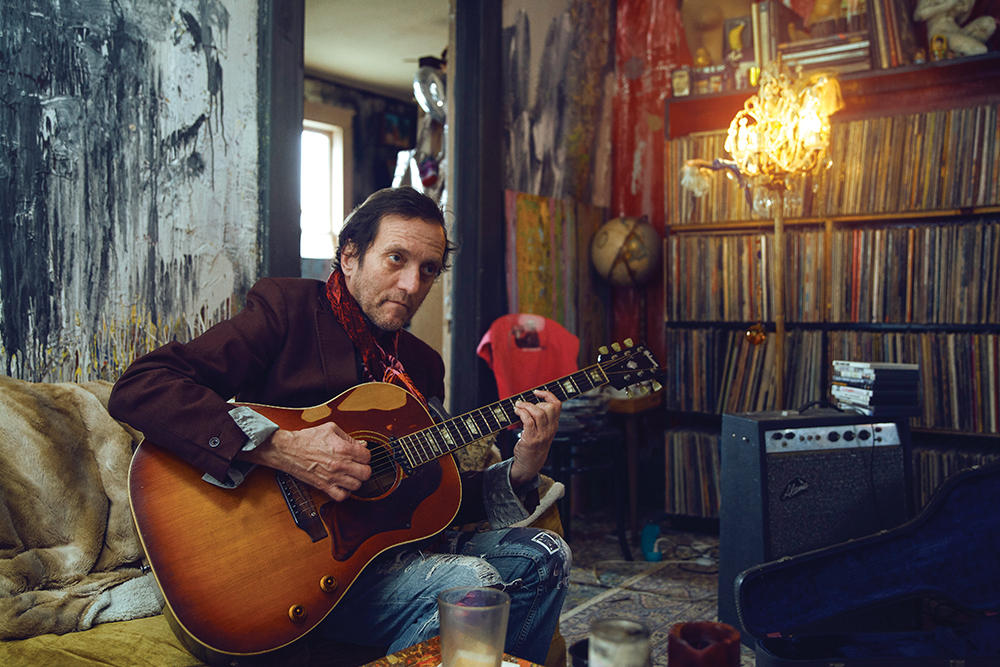 “We loved it (playing the first NMF) and love how it’s become such a big deal over the years,” – Tyson Todd Meade, lead singer of the Chainsaw Kittens

Founded in 2008, the Norman Music Festival started off as a one-day special event featuring hometown heroes Chainsaw Kittens and (Tripping Daisy) Tim DeLaughter’s Polyphonic Spree. The concert was so successful that a sequel was inevitable, but few if any could have predicted its tremendous growth and longevity. Now in its 12th year, the NMF has established itself as the premier music festival in the state, thanks in large part to incredible community support and sponsorship, branding and organization.

“We loved it (playing the first NMF) and love how it’s become such a big deal over the years,” says Tyson Todd Meade, lead singer of the Kittens.

Managed by nonprofit entity The Norman Music Alliance, the event now spans three days, 300-plus performers and 100,000 attendees, and it’s still free. It has become, like stormy weather, a spring staple.

This year’s lineup will include The Beach Fossils from New York, rapper Black Milk with Nat Turner, Soccer Mommy, Omar Apollo, (former) Okie punk rockers Skating Polly, The Garden and Mega Ran. If you had to go to Spotify to look up these artists, you’re in good company. NMF organizers have put together an eclectic mix of rap, hip-hop, indie rock, singer-songwriters and psychedelic pop acts.

Longtime fan Chad Huntington describes NMF’s lineup, “It’s a lot like getting a mix tape from that friend who’s way better at finding new music than you are, and who’s really great at introducing you to the bands that one day soon will be your favorites.

“The insistence by the organizers in remaining free up to this point has caused them to be much more thoughtful with lineups than many festivals,” Huntington adds. “That model has also resulted in many more opportunities for great Oklahoma bands and other emerging artists.”

Case in point: This year’s lineup also features acts from the 405 including Flock of Pigs, Jabee, Rainbows Are Free and Helen Kelter Skelter.

Presented by Citizens Bank of Edmond, Heard on Hurd is a family-friendly street festival occurring from 6-10 p.m. at the corner of Broadway and Hurd in downtown Edmond. In previous years, it has been a monthly event between March and October, but due to construction scheduled for its site, organizers will be announcing 2019 installments on a month-to-month basis. When it does return, it’s a temporary street takeover featuring local food trucks, live music, pop-up shopping and a celebration of Edmond’s community spirit. Suburbia never sounded so good!

“We have around 35-40 performances make it into the festival,” says Selena Skorman, executive director of the Plaza District Association. “We have a music committee, made up of respected members of the local music scene, that juries in the applicants. We are looking for local, original music. We love cover bands, but do not feature them at our festival.”

The Plaza District thrives on its distinctiveness, after all – why shouldn’t it encourage the same among area artists?

Conceived by Byron Berline, the Oklahoma International Bluegrass Festival has become bluegrass music’s answer to the United Nations. Musicians from all over the world come to Guthrie the first weekend of October to perform and celebrate the unique genre.

Historic Guthrie is a perfect setting for the festival, which was established in 1996. Now a staple and economic development driver for the central Oklahoma region, the festival draws several thousand attendees every year. 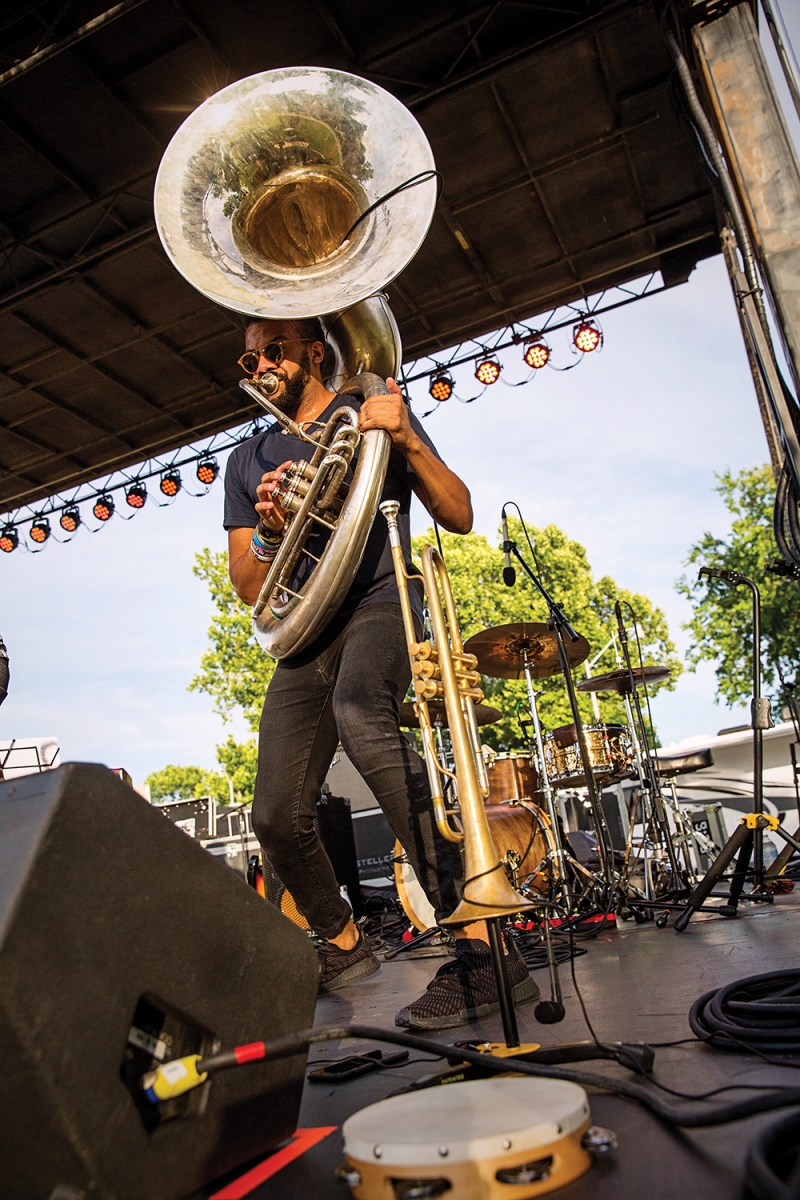 Jazz in June provides a forum over three nights to listen to contemporary and traditional jazz and blues artists under the Norman sky. It bills itself as “the hippest jazz festival around” and “a gift to our community.” It’s a gift that has kept on giving; celebrating its 36th year this summer, the festival remains free and welcoming to all ages. Stay tuned for the announcement of 2019’s special guests.

The legend of Woody Guthrie was that he always had guitar in hand and was seeking an audience. He would play to anyone and often crashed union halls and meetings, ready to sing. That spirit of spreading his message is celebrated to this day.

In 1997, a group of volunteers assembled to discuss ideas for honoring Woody Guthrie’s music and philosophy. They came up with the concept of a music festival, in Guthrie’s hometown of Okemah, that would allow people to visit different venues to experience his music. Getting the endorsement from Guthrie’s two children required that the festival be free and accessible to all – a promise that has been kept for the most part, although some of the multiple venues this year may include an entrance fee.

This year’s lineup has not been announced, but the Woody Guthrie Coalition is working on personal invitations to artists. 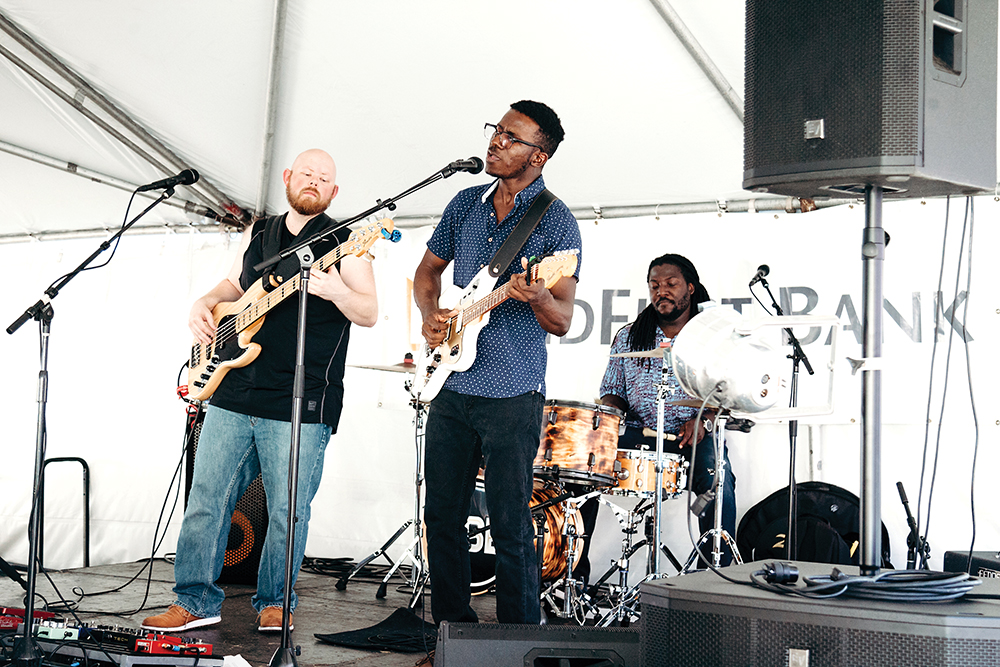 The Paseo Arts Festival provides a fantastic opportunity to experience young up-and-coming performers from the region: with music running 10:30 a.m.-9 p.m. on two different stages Friday and Saturday, it allows 10 performance slots for each stage. Sunday is a short day, but live music is still featured.

“I am always blown away by the talent in Oklahoma City and how excited bands and performers are to be a part of the festival,” says Paige Powell, program manager for the Paseo Arts Festival.

“We have two stages – our North Stage has more of a chill vibe with jazz, singer-songwriters and folk musicians; on the South Stage are rock, country and performance groups. I break down the lineup by genre and try not to have two of the same genres back to back. It’s Oklahoma, and people love their country music, but I make an effort to get as many different styles and sounds as I can.”

This unique three-day live music retreat on the beautiful Illinois River stands alone as the premier Red Dirt music experience, a genre that’s revered worldwide for its diverse sounds and quality songcraft. Aside from the music, this festival’s emphasis is focused on the great outdoors, where camping is available.

The music lineup each year is always handpicked by creators Jason Boland and Turnpike Troubadours, and consists of the artists and bands whose music they themselves love and respect. It’s this kind of personal, hands-on attention that makes Medicine Stone feel like a “family affair,” and has drawn thousands to the event from all over the country since its inception.

The AMP (Art, Music and Power) Festival is a family-friendly, free event designed to celebrate art and music created by powerful women. Participants are selected by an open call to female artists of all mediums, female artisans and all-female or female-fronted bands or solo musicians of all music genres.

Festival organizers wanted an opportunity to bring recognition to female talent, with the intent to provide an experience that will inspire future generations of female artists, artisans and musicians – entering its fourth year, it’s still rocking. A portion of the proceeds (from vendor sponsors) will support the Oklahoma City Girls Art School. 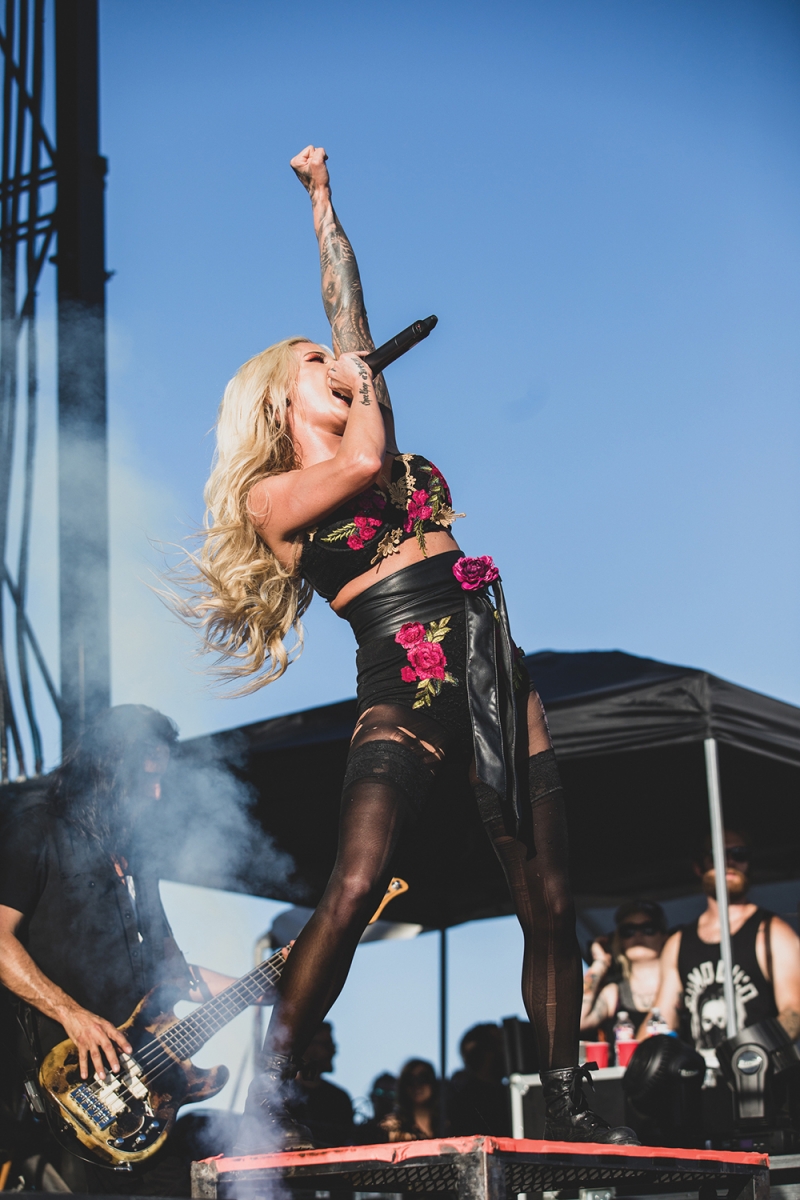 With a theme of “Life, Liberty and the Pursuit of Rock,” how can you not know what this festival is all about? Do yourself a favor: Go to YouTube and search for “Heavy Metal Parking Lot.” This 16-minute video was taken by two amateur filmmakers before a Judas Priest concert in Maryland in 1986. Imagine the teenagers from this video 33 years later, and that’s your primary audience that will comprise Rocklahoma.

The very first Rocklahoma was actually central Oklahoma’s version of the Texxas Jam, and took place at Memorial Stadium in Norman in 1980. On that day, a bill of The Doobie Brothers, Van Halen, Sammy Hagar and Pat Benatar rocked the field. The brand was resurrected in 2008, and over the past decade, Rocklahoma has established itself as Oklahoma’s gold standard for hard rock and heavy metal music.