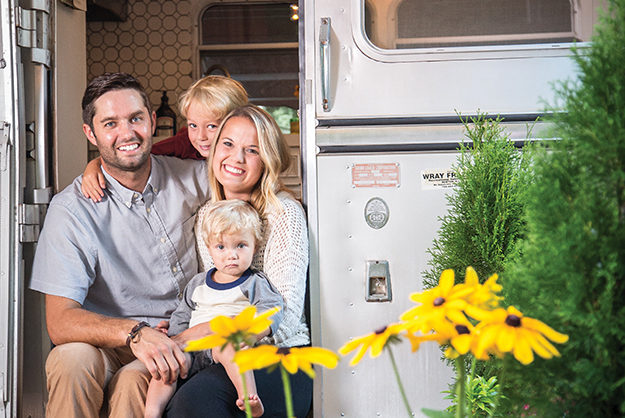 One Family Discovers that Less Really Is More

As A Young Married Couple Starting Out, Josh and Katie McCullock’s dream home initially wasn’t a 1973 aluminum camper, but it was off the beaten path.

“For our first big home, we’d always talked about restoring an old house,” Josh says. “And we did it; we spent five years and way too much money renovating a house in the historical district.”

Life took an unexpected turn, however, with youngest son Fischer’s diagnosis of a heart defect. Josh explains that he and his wife did a lot of rethinking during that time, about what they felt and believed about “home.”

“Fischer’s open heart surgery when he was 8 months old really stopped us in our tracks for about a year and made us reevaluate a lot of things.”

“We went back and forth between Dallas for several months and then stayed there for a while during his recovery. When we came back to our 1,700-square-foot house after living in hotel rooms, we thought, ‘This is actually a lot of work.’”

With their eyes opened to the simplicity of small spaces, the McCullocks experienced an additional epiphany on a subsequent road trip that bolstered the desire to dial down. 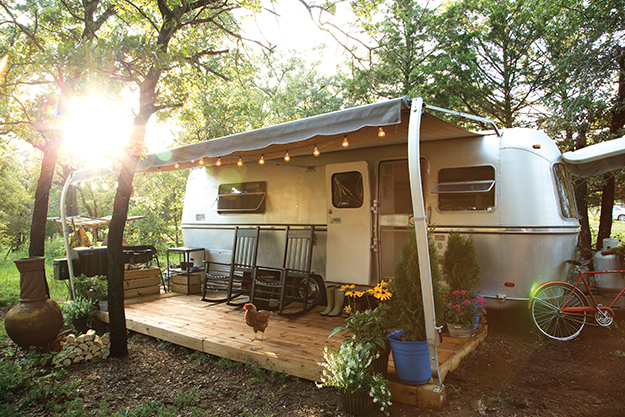 Nestled in amongst the trees on 15 woodsy acres, the McCullocks’ camper proves that charm has no size requirement; a porch
and hammock extend living space and take advantage
of the beauty of nature for home decor.

“Immediately after the doctors released Fischer, we took a month-long road trip,” says Josh. “Camping in national parks, all the way to California and back. That was what really sold us on making a change and having more freedom in our daily lives; hitting the road with just the things we had and needed. We came back thinking, ‘This is the happiest we’ve ever been. Stuff had nothing to do with it.’”

Plans had already been in the works for the McCullocks to build a new house on property shared with Josh’s parents and brothers, and the couple had decided to build a small cabin on the land to live in temporarily with sons Gavin and Fischer, while constructing their permanent home. Researching options for more diminutive dwellings on the Internet, they stumbled onto the small house movement, and in a serendipitous coalescence of timing, life change and opportunity, the plan changed.

“Around that time a book tour came to Full Circle bookstore,” Josh says, “for a book called ‘Everything that Remains’ (written by Joshua Fields Millburn and Ryan Nicodemus). It opened our eyes to the fact that we don’t really examine the toll consumerism takes on your space, your mental capacity to take care of so many things. We thought, ‘Instead of another big house, we’ll just live in the cabin.’”

With the cabin now the ultimate destination, instead of a way station, the couple began building in earnest, but when their first home sold, the revved-up timeline left them in a quandary about a place to live until construction was finished. 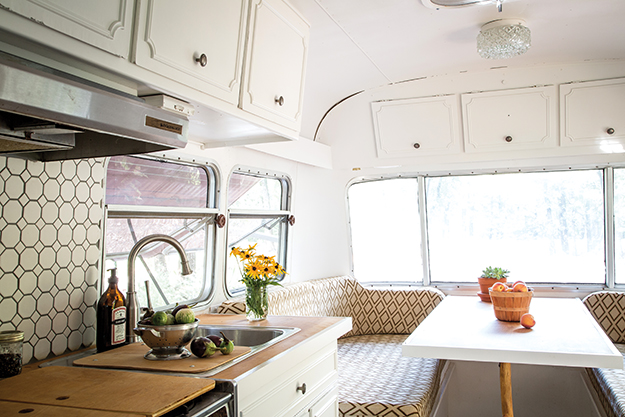 Unique touches like the rustic table leg on the dinette (a souvenir stick picked up by Gavin on a trip to Taos, New Mexico) and geometric print cushions on the dinette (extra material from a sailboat renovation) add a sense of fun and are resilient enough
for life with two small boys.

“The Airstream came in at the last minute,” Josh explains, “I renovated it in a week-and-a-half in my driveway.”

“We’re trying to build the cabin mortgage free, and the Airstream is the band-aid to help make that happen. I would have loved to have been farther along in the (cabin’s) building process, so that we wouldn’t have had to have an in-between solution, but we love Airstreams and I love renovating things.”

Although the process of building their “dream home” is still ongoing (read about the continued journey on the McCullocks’ blog at themccullocks.com or follow joshmccullock on Instagram), Katie and Josh are content in the present with their discovery of the power of simplifying, and know that the old adage holds true; home truly is where your heart is. Josh explains that the dividends they’re looking for, in the future, go beyond resale value, and that the purpose of all that they do – downsizing, building without debt – is to accrue the things that really matter.

“Early on in my photography career, the one thing that I kept coming back to, about why I like to do what I do, is the freedom and the time.”

“Money is one thing; you can make more money, but you can’t make more time.” 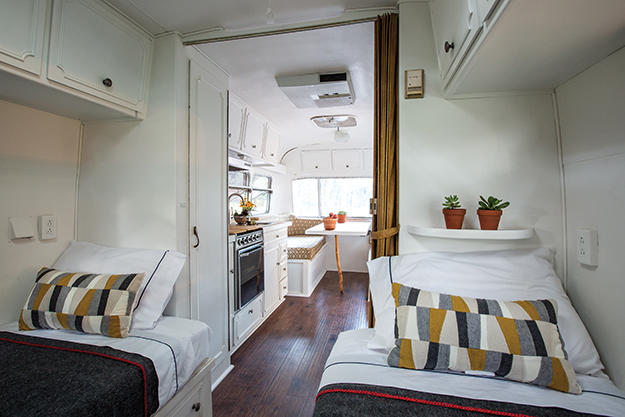 Slim closets flanking the refrigerator and stove supply storage, along with cabinets over the boys’ beds, but the principle of minimalism is mostly what keeps order. The engineered wood flooring was left
over from the historic house remodel. 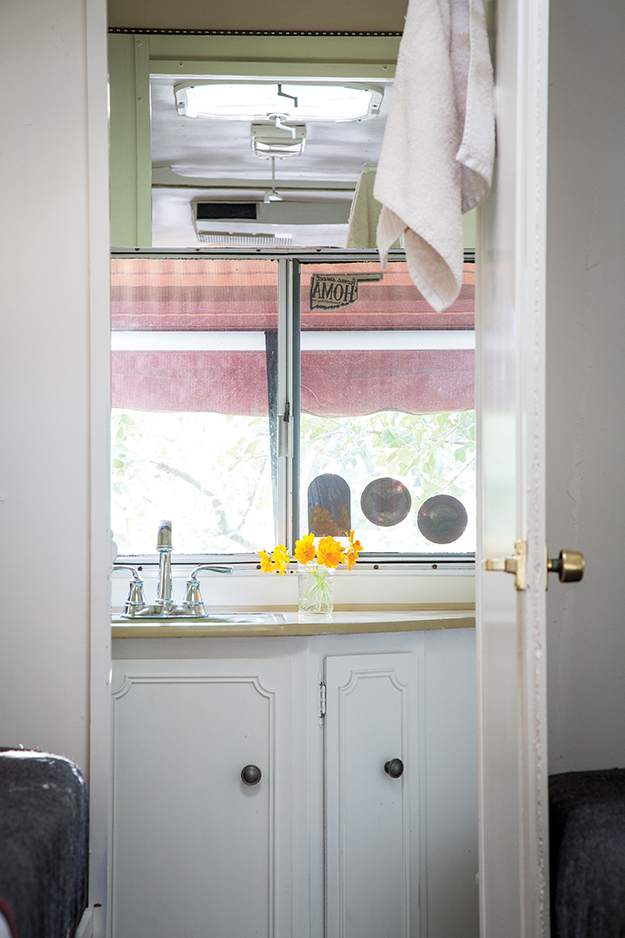 Many of the camper’s touch-ups add modern flair, but the bathroom exudes retro appeal. 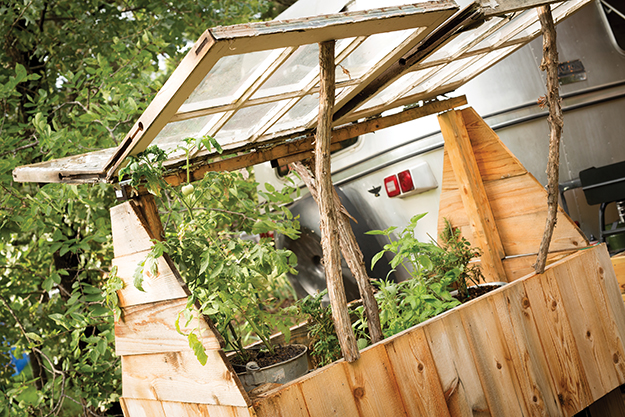 Built by Josh and son Gavin, a freestanding greenhouse/cold frame/garden (the hinged top is made from old windows) houses herbs and showcases the family’s knack for repurposing materials, and blooming where planted.
Share