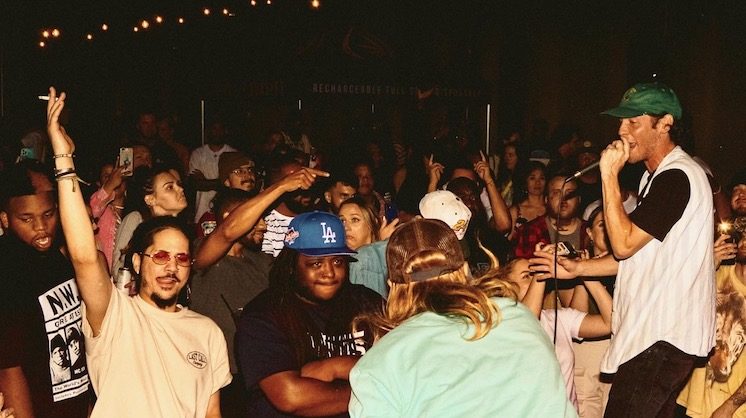 Every final Friday of the month since May 2022, local record label 88REC has recruited musicians, visual artists, food trucks and partygoers to an exuberant celebration of Oklahoma talent in a small events space at StarSpace46 Coworking. The free monthly party named MAFF is one of several ways label owner, rapper and producer Josh Sallee wants to uplift Oklahoma City artistry.

MAFF started as a way for 88REC to sell records and merchandise while allowing fans to meet the label’s artists and team. “I really love Duck Down (Music) and Rhymesayers, and they would have pop-ups almost weekly,” Sallee said. “It’s a way to get the name out, and I have experience doing it locally.”

The acronym stands for “music, art, food and fashion,” although Sallee says fashion talent can be difficult to find due to the expensive process for designers needing to set up booths. Oklahoma breweries and dispensaries sponsor the event with a free first drink and goody bags of marijuana products. The atmosphere is meant to feel like an underground, DIY show. MAFF aims to attract people with a fun environment and introduce them to burgeoning local artists that Sallee and 88REC enjoy.

“(The newer artists) are young, and they’re really hungry,” Sallee said. “It’s definitely a moment to give guys a chance to get on stage, and then to us as a label see how they are live.” The party serves as a platform for newer artists to sell merchandise and grow their audiences, and it allows Sallee to consider if they would be a good fit to sign with 88REC.

Discovering skilled local musicians is what spurred Sallee to found 88REC in May 2021. With a lack of shows during the pandemic, he opened his home studio for public recording, where he met Hugh Glass. The two began working together, and a fan approached Sallee about funding a creative project. Sallee decided to establish the label with the investment and sign Glass as his first artist. Since then, the label’s staff of five have promoted and produced music videos for its first release, Sallee’s album Flamingo, which came out Sept. 22.

“We wanted that (album) to jump-start things,” Sallee said. He hopes the excitement will carry over to Glass’ upcoming album, which is set to release late 2022 or early 2023. Flamingo represents Sallee’s attempt to capture the fleeting, mesmerizing magic of music and a vision of a pink cloud that inspired a breakthrough in his songwriting. An album release show Oct. 1 at Beer City Music Hall with an elaborate set reflecting Flamingo‘s cover art will celebrate Sallee’s efforts, but it’s also meant to carry 88REC’s momentum as a supporter of the local music scene.

When asked what’s kept him in OKC, Sallee cited the people he loves and “the opportunity to be one of the people who helped bring this side of things to a national level … All these incredible bands from here and artists — it’s kind of its own little movement.”

As for MAFF, although he hopes to expand to cities such as Tulsa and Wichita and produce a festival, Sallee doesn’t want to give up the current intimate space. “We’ll just let there be a line,” he said.

Editor’s note: Josh Sallee is the brother of editor-in-chief Julie Partin. Partin was not involved in the reporting and editing of this story, and the relationship did not influence the editorial direction of the article.