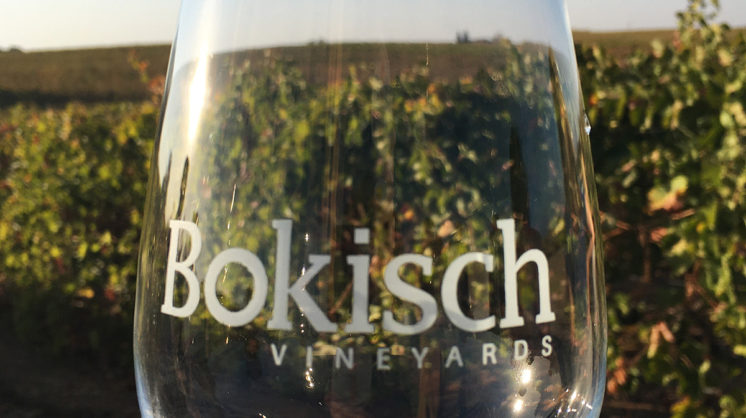 Say “Lodi” and someone is bound to channel Creedence Clearwater Revival and respond with “Oh, Lord – stuck in Lodi again.” All I have to say is, “You should be so lucky!”

Located in California’s Central Valley, Lodi, east of Napa and south of Sacramento, is California’s largest viticultural appellation with more than twice as many acres of vines as Napa. For decades a source of grapes for other wine producers, Lodi has now come into its own with approximately 90 wineries. The area is a center for Old Vine Zinfandels, and grows over 100 varietals including French, Spanish, Italian, Portuguese and German grapes.

While Napa and Sonoma may have more name recognition, and tonier images, Lodi is no slouch. You’ll find great wines here. Wine Enthusiast named the Lodi AVA (American Viticultural Area) the “2015 Wine Region of the Year” and Adam Mettler, lead winemaker for both Mettler Family Vineyards and Michael David Winery, was named by the same magazine “2018 Winemaker of the Year.”

Most of the wineries produce small batches sold at the winery or limited areas. Some are available locally – with some searching. Some will ship. But the best way to experience these wines is by visiting the wineries, tasting and talking to the winemakers.

My home-away-from-home was Wine and Roses. Sprawling over seven beautifully landscaped acres, W&R includes, besides a variety of rooms, a highly-rated spa, restaurant and casual café, plus the usual amenities.

Angel trumpets trail from Mission-style balconies; fountains gurgle in shady nooks; cages of exotic birds are tucked into the trees. Walking along flower-lined paths, I heard someone calling, “Hello.” It took a while before I discovered a colorful macaw with a cheeky attitude.

My press group had a great introduction to our whirlwind tour with a dinner and wine-pairing at Wine and Roses. With our multiple courses, we tasted wines from four of the eight wineries we would visit in the next two days. As we met owners and winemakers, I was impressed with the diversity – both in grapes grown and in the stories behind the choices.

The Mettler family has tended grapes on their farm since 1899, originally growing them to sell to others. Today, a fourth and fifth generation head the business. Mettler Family Vineyards released its first wine, a Cabernet Sauvignon, in 1999. The first white wine it produced was a Spanish Albarino in 2014. While not in its current catalog, we also tasted a Mourvedre and a Pinotage (a South African varietal). The tasting room is large and comfortable, and the grounds are worth a wander. 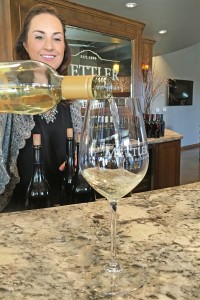 Adam Mettler, 2018 Winemaker of the year, is also the Director of Wine Operations at Michael David Winery. This is another family operation with deep roots in Lodi. The Phillips family (Michael and David are brothers) has been farming in the Lodi area since 1850.They specialize in Old Vine Zins, Rhone and Bordeaux varietals and blends. 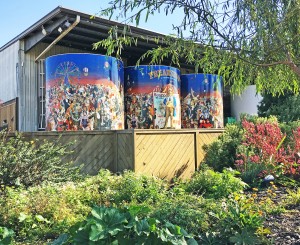 Their wines have several different labels. Some – a Chardonnay, Sauvignon Blanc, Symphony and Viognier – are sold under the family name. Their Reserves have labels including Lust, Gluttony and Sloth (along with several more sins) and a couple with an Inkblot label. Three reds sport Earthquake labels. My favorite has to be the Freakshow wines – the labels are irresistible, with inspiration from old circus posters. Their Freakshow Cabernet is their best seller.

Along with their tasting room, there’s also a café, bakery and gourmet produce shop. The grounds include several gardens and lots of areas for gathering. There’s also a great play area for children. The Phillips brothers obviously love life – and from their labels, they also enjoy their products!

We were treated to a Catalonian barbecue at the Bokisch Winery. As a child, Markus Bokisch spent summers in Spain with his family. After he and his wife Liz married, they moved to Spain to learn more about growing and making Spanish wines. Cuttings from vines in Spain brought more of the tradition to California. From fresh and fruity Albarino to full-bodied, complex Tempranillo, they’re bringing lots of amor from Espana. 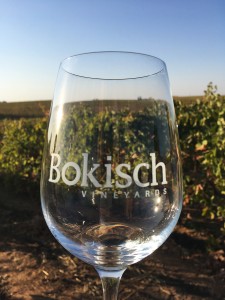 All these owners are personally involved with their land and liquid treasures, but only David Lucas at Lucas Winery is on a first-name basis with his vines. At least the grand dame Zinfandel vines, some dating back to Prohibition. These venerable vines are tenderly hand-pruned and harvested, and produce the pride of Lucas’ operation. The best wineries – and Lucas is one – adopt a long list of sustainable practices. Many, like Lucas, grow organically. But Lucas goes one step further in his respect for sustainability and saving the planet: His entire winery runs on solar energy. Lucas Winery sells only to subscribers or through the tasting room.

Oak Farm Vineyards is another of the larger wineries we visited. Eponymous, century-old trees surround the owners’ home. Built in 1876, it looks like it belongs on a southern plantation. The spacious tasting room, more contemporary, is high-ceilinged with a huge stone fireplace. The Panella family is another longtime Lodi farming family. Before they began growing grapes, they farmed walnuts and cherries. 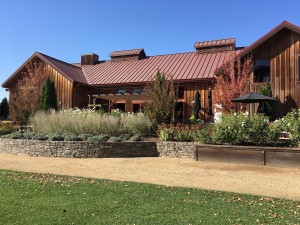 The tasting room at Oak Farm Vineyards blends with some of the farm’s historic buildings.

Fourteen grape varieties grow on the property; Oak Farm also sources grapes from other local farmers. In all, they produce 30 different wines. They are particularly proud of their estate-grown Barbera.

McCay Cellars’ tasting room is in downtown Lodi. Originally a packing shed for the railroad, the decor features bits and pieces from old Lodi buildings in a laid-back, California atmosphere. Owner Michael McCay says he wants his guests to “taste wines, feel comfortable and take their time.” 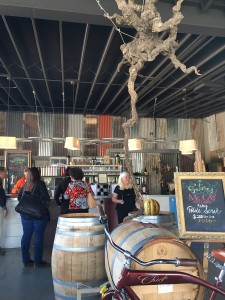 Owner Michael McCay touts the terroir of his wines in his downtown tasting room.

McCay says, “Every vineyard has its story to tell, so we let it tell its story. It’s all about terroir.” That extends to his practice of native fermentation – allowing wild yeasts to influence the wine – no commercial yeast is used.

The name for Sue Tipton’s winery, Acquiesce, was inspired by a k.d. lang song. The word means “to surrender,” and describes her attitude toward the land and the grape. She doesn’t tinker with the natural product, even aging in barrels which add nothing foreign to the flavor. Her specialties are white wines. 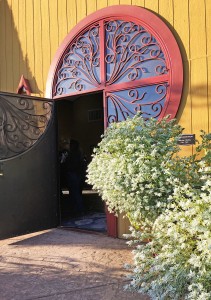 Our last night in Lodi featured a tasting at St. Jorge Winery, where Vern and Jenise Vierra are dedicated to Portuguese-style wines. Vern’s grandparents emigrated from the island of St. Jorge in the Azores. Everything about this place was elegant – including the wine labels. The 15-acre estate features Mediterranean architecture with a large courtyard and fountain, and a stunning outdoor area perfect for weddings. This place was so beautiful I even took photos in the bathroom!

By this time, I was so relaxed I quit taking notes, so I can’t tell you exactly which wines I tried. I remember they were good. And we capped the evening with a glass of port – much better than what I tasted in Porto itself.

I’d like to get stuck in Lodi again. After all, there are nearly 80 more wineries to go.