Looking at the “Invisible Man” - 405 Magazine

It is the largest tribute to a writer in the largest city in the nation, a towering bronze slab framing the silhouette of a man striding southward, larger than life.

The memorial, inspired by Ralph Ellison and the title of his groundbreaking novel, is the only New York City monument dedicated to an Oklahoman.

The cutout figure offers a portal to the changing landscape of Ellison’s Harlem neighborhood: the bobbing branches of surrounding dogwoods and azaleas, the restless sky above West 150th, the ornate apartment building at 730 Riverside Drive where he lived for nearly half a century.

The figure itself is faceless, ageless, timeless. His gaze tilts upward. His right arm reaches forward, as if reaching for his reflection.

The author it memorializes was born March 1, 1913, in a boarding house at 407 NE 1st in Oklahoma City. (Ellison would later give his birth year as 1914.) His father, whose own father had been born into slavery, stressed reading and education, and was determined to raise his son with a love of language and literature.

The newborn was named Ralph Waldo Ellison, in honor of 19th century poet and philosopher Ralph Waldo Emerson. Lewis Ellison was proud to link his son to the leader of the Transcendentalist movement, which stressed self-reliance and independence. He boasted to friends and family early on that he was “raising this boy up to be a poet.”

But the name and his dream would be all he could give. One hundred years ago this summer, on a hot June day, Lewis Ellison was pierced through the stomach by a frozen shard of ice that sheared off a giant block he was delivering to Salter’s grocery store. Three-year-old Ralph, who happily accompanied his father on deliveries around town in their horse-drawn wagon, heard the crash and watched as his father was rushed to the hospital.

And so Lewis Alfred Ellison, who had moved to Oklahoma six years earlier in hopes of a better life, died during surgery a month later, on July 19, 1916. He was 39.

The death left his widow, Ida Milsap Ellison, to care for Ralph and his infant brother, Herbert. She worked as a domestic and as the janitor of the Avery Chapel African Methodist Episcopal Church at NW 1st and Stiles, which allowed the small family to live in the rectory. 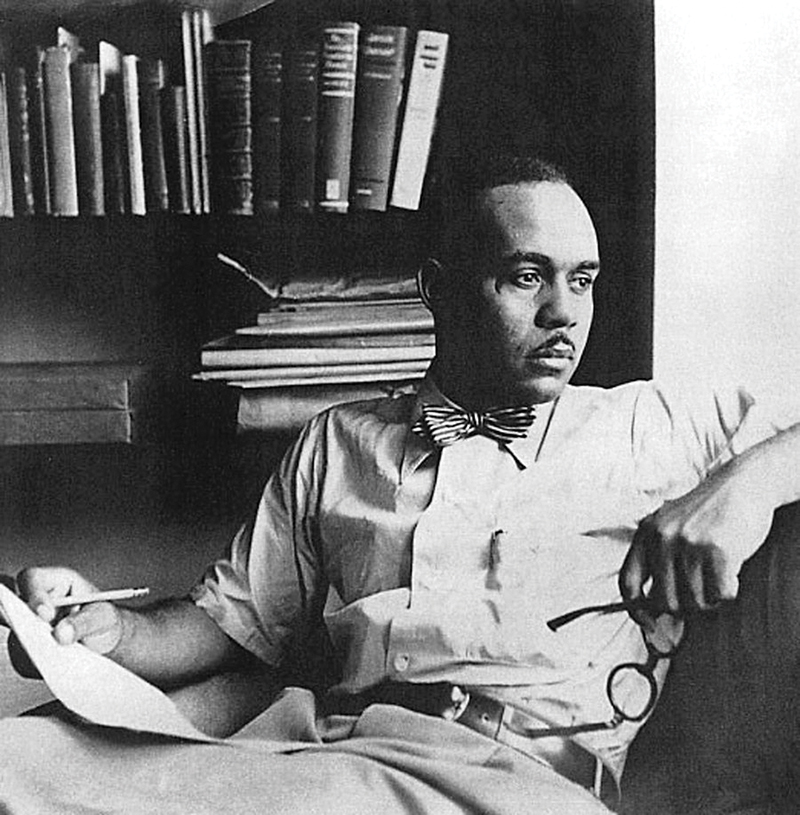 Ralph helped out as he grew older, selling newspapers at Broadway and Main, shining shoes downtown, washing cars at a filling station on Classen. He began playing trumpet at the age of 8. To save money for college, he later worked for $1 an hour as a waiter at the Skirvin. He also served at the Huckins Hotel and the University Club, and waited tables at the Oklahoma City Golf & Country Club in Nichols Hills where, his biographer would note, “the boys had to travel in groups to fend off the dogs set upon them by whites when they walked from the streetcar line.”

He found kindness elsewhere. As an elevator operator in the Hub Building on West Main, he was allowed by the Lewinson family, who owned the property, to catch up on his reading between passengers.

In the segregated schools of Oklahoma City, he excelled at music under the legendary teacher Zelia Page Breaux. In exchange for cutting his grass, he received private lessons in trumpet, composition and conducting from Ludwig Hebestreit, conductor of the Oklahoma City Orchestra.

Distracted by outside music gigs, Ellison fell short on credits and, although he was photographed with the Douglass High School Class of 1931, did not graduate until 1932. The next year, he left Oklahoma City for the Tuskegee Institute in Alabama. In his shoe he had hidden his worldly wealth: $32. With no suitcase, he wore his entire wardrobe in layers, making it easier to hop a freight train and save the cost of the ticket.

After three years of study at Tuskegee, he moved to New York City to earn enough money to pay for his senior year. But he soon met Harlem Renaissance writers Richard Wright and Langston Hughes, became involved in the Federal Writers’ Project and never moved back.

Although he would not visit Oklahoma City again for 20 years, Ellison continued to draw on his hometown for inspiration. He incorporated the people and places of Deep Deuce and the tempos and structure of music into his debut novel, Invisible Man.

Published by Random House in 1952 after seven years of toil, the musings of its nameless, self-aware protagonist were an instant hit. The novel – the first major work to look at racism from the perspective of an African-American – won instant acclaim. Ellison was 39 years old, the same age his father had been when he died. 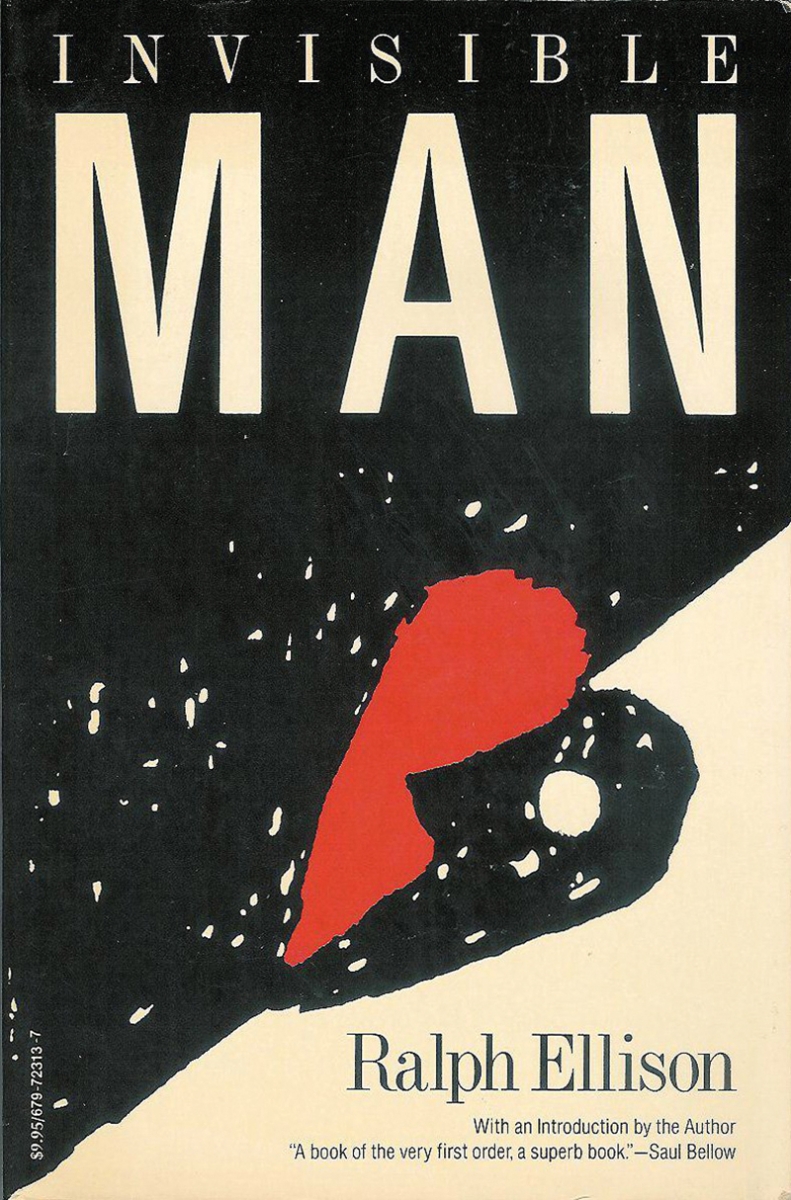 Invisible Man spent 16 weeks on bestseller lists and would go on to win the 1953 National Book Award, beating out The Old Man and the Sea by his idol, Ernest Hemingway.

Ellison would go on to win the Medal of Freedom, the highest civilian award in the United States, in 1969 and the National Medal of Arts in 1985.

In the year before he died, after living in New York City for more than half a century, Ellison explained why he still identified as an Oklahoman: “My early emotions found existence in Oklahoma City. In houses and in drugstores and barbershops and downtown, all of the scenes, the sights, the localities that are meaningful to me are in that city; my father’s buried there, and of course all the people who were heroes to me as a kid, my role models.”

On the centennial of his birth, British author D. Quentin Miller reflected on Ellison’s continued relevance: “What is it that makes a 50-year-old novel so engaging, especially one that is well over 500 pages long? There are a few superficial explanations. It contains sex (not much), violence (not gratuitous), a naive narrator who takes a long time to learn life’s basic lessons, an honest and unvarnished look at racial oppression and a cast of memorable characters. It is also a carefully crafted work that repeats its own motifs like a symphony, allowing readers to sense its unity and gauge its development without having to struggle. Its plot is engaging: The narrator is always in motion, or at least his mind is always racing, and the flow of his words carries the reader along. While all of these factors contribute to making Invisible Man a classic, they all support the main factor: Ellison wrote a novel of ideas. Not a single idea, but a host of them.”

Larger than New York’s statues of Shakespeare, Robert Burns and Sir Walter Scott, Ellison’s monument commands views of the Hudson and of the apartment building where he lived and died. Dedicated on May 1, 2003, the Invisible Man statue – paid for by friends and fans, and designed by sculptor Elizabeth Catlett – stands near a section of the park where he used to stroll.

The east side of the memorial catches the first rays of the sunrise, which stream down the width of 150th. The memorial’s west side absorbs sunset’s last glow, illuminating the bronze surround of the silhouette.

Inscribed on pink granite, surrounded by benches inviting passersby to sit and ponder, are opening words from the book written by an Oklahoman, translated into more than 20 languages and read by millions.

“I am an invisible man … I am invisible, understand, simply because people refuse to see me.”

Nearby, the massive statue of a featureless man is caught in mid-stride, perpetually moving forward. 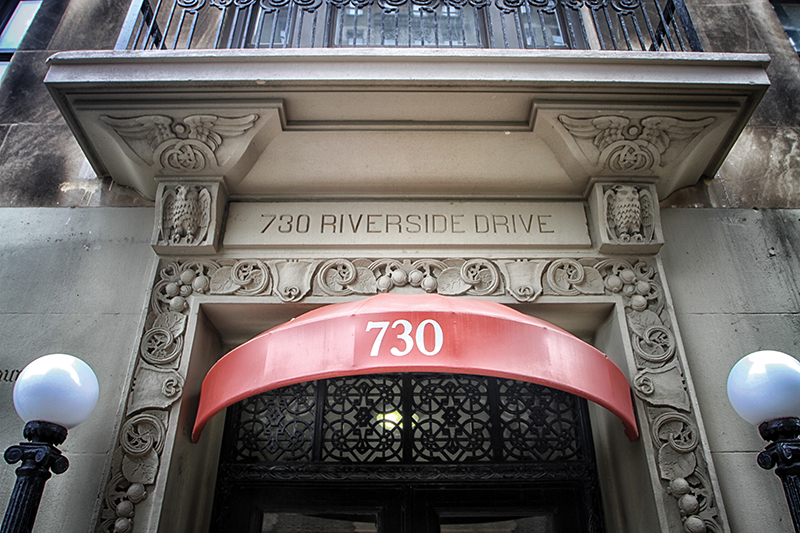 In an essay published in 1964, Ralph Waldo Ellison – who used his middle initial, or no middle name at all – wrote of the burden and the responsibility he felt of the famous name bestowed upon him by his father:

“Our names, being the gift of others, must be made our own. We must learn to bear our names with all the noise and confusion in which we find ourselves. They must become our masks and our shields and the containers of all those values and traditions, which we learn and/or imagine as being the meaning of our familial past. … Remember that I did not destroy that troublesome middle name of mine; I only suppressed it. Sometimes it reminds me of my obligations to the man who named me.”

The summer after winning acclaim for Invisible Man, Ralph Ellison returned to his hometown for the first time since he hopped a freight train for college 20 years earlier.

A newspaper report of his stopover noted: “A former Oklahoma City shoeshine boy and waiter whose first novel won the coveted 1953 National Book Award is visiting here this week ‘because I thought if I came back home and looked around, the ideas for my next book would take a more definite form.’”

Although Ellison was revered as an educator, essayist, commentator and short story writer, his second novel would be a struggle. He completed 350 pages before the manuscript was lost in a house fire in 1967, and spent the rest of his life rewriting it, churning out more than 1,500 pages and publishing chapters here and there. Only after his death was a version published, in unfinished form, as Juneteenth.

On June 21, 1975, he again returned to Oklahoma City for a ceremony dedicating the new public library on NE 23rd named in his honor. He called the library “the nexus of dreams” and “the place where we are able to free ourselves from the limitations of today by becoming acquainted with what went on in the past, and thus we project ourselves onto the future.”

In 1995, the Oklahoma Center for the Book established the Ralph Ellison Award, to posthumously honor writers who had made outstanding contributions to the state’s literary heritage. Its first winner was Ellison, who had died the previous year. After 14 consecutive years of being nominated, he was voted into the Oklahoma Hall of Fame in 2002.