Looking Back: The History of a Ghostly Oklahoma Town - 405 Magazine 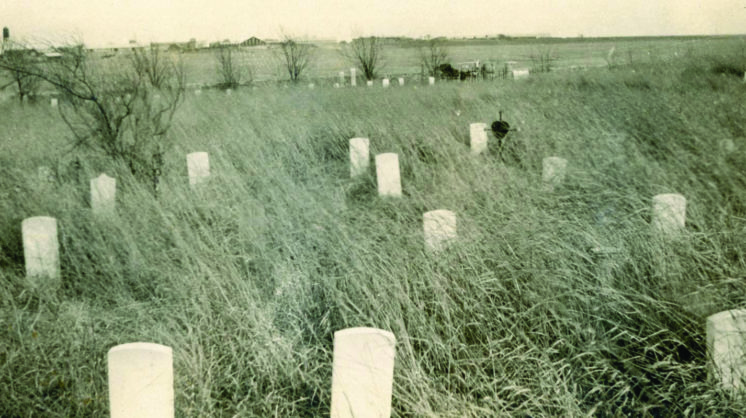 A 1916 photo of the Fort Reno cemetary

Historic Fort Reno sits in stark contrast to an otherwise boundless backdrop of prairie and sky. Its organized buildings, while serving as a barrier against the wild and unpredictable terrain, also capture echoes of its rich, 150-year history.

It’s a piece of Oklahoma’s past that many say exists out of time—even providing a fruitful environment for numerous hauntings.

Various apparitions have been seen over the years, including a misty woman who stands at the tree line of the cemetery and a soldier in uniform who appears near the commissary, said Fort Reno Director and Museum Curator Wendy Ogden. Screams and thundering hooves often are heard, and physical sensations have been felt by those who visit—all linked to people and events in the fort’s past.

Located just west of El Reno, the fort was in operation from 1874 to 1948 and played a major role in the Indian Wars of the 1870s as a station for the U.S. Cavalry. Prior to that, drovers ran cattle from Texas up the Chisholm Trail, traversing what would become Fort Reno’s commissary grounds while headed for a well-known passage across the Canadian River.

Fort Reno troops helped patrol the Unassigned Lands of Indian Territory and drove off early “boomers” prior to the 1889 land run.

By the turn of the century, diverse communities including enlisted soldiers, cowboys, Native Americans, and civilians lived on or near the fort. In 1908, it was designated as one of three Army Quartermaster Remount Stations, specializing in horse breeding and training.

During World War II, the fort served as an internment camp for more than 1,300 German and Italian prisoners of war who were hired as laborers for local farmers. It also provided 70% of the horses and mules that served in the war effort, Ogden said.

‘So Many People Came in and out of There’

Laura Spriggs, a ghost hunter and frequent tour guide at the fort, said the preservation of history there provides a unique environment for paranormal activity.

“Fort Reno is one of my favorite places,” said Spriggs, who pens the “Quirky Driven Life” blog. “So many people came in and out of there. It’s like stepping back in time.”

During her investigations of Fort Reno, she has recorded a number of screams and footsteps and heard voices call her by name.

Perhaps most prominent are two children who have been seen together more than a dozen times. Ogden says she believes they are Maria Wheeler and Louis Frass, two children who died at the fort in early spring of 1900.

“I had patrons in the museum who walked the parade grounds and then chewed me out because I was letting my kids play outside without supervision,” Ogden said. “They described the boy as wearing knickers and a button-up shirt and a little hat. The little girl was in a solid white cotton dress.”

As for the abundance of ghostly activity, Ogden concludes it arises from a profound sense of the lives that have been lived at the fort.

“Life at the fort was beautiful. It was a frontier. That’s where everything started,” she said.