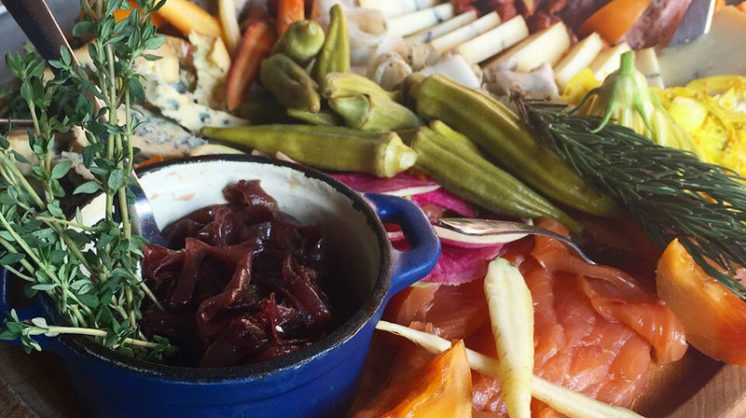 Only rarely since it opened has Ludivine offered brunch on a Sunday, and then always on Easter or Mother’s Day. Until now – beginning July 16, the Midtown “farm to fork” restaurant will experiment with weekly Sunday brunch. Chef-partner Russ Johnson said the new service is a pilot program.

“We are going to offer it every Sunday through September 3,” Johnson says. “We’ll evaluate as we go and make a final decision about continuing by Labor Day Weekend.”

That means diners will have an opportunity to get “the Ludivine experience” in a brunch setting. As a template of sorts, Johnson is using the most recent Mother’s Day brunch menu. And because it’s Ludivine, everything will be prepared from scratch, with ingredients sourced as locally as possible from farms and ranches.

The menu includes some of Johnson’s favorite dishes, including one he lists on his “death row meals.” (Apparently, he gets two, with the other being stroganoff.) The brunch item is one he learned to cook while working at a French restaurant in Denver.

“The Croque Tartine Parisienne is a play on the Croque Madame,” he says. “We use a boule from Esca Vitae (the boutique bakery on Classen), grill it, add rosemary ham, béchamel, a gratin of two cheeses including raclette, and finish with a fried egg.”

No, it doesn’t sound healthy, but who cares? They will also serve a poached lobster tail with popcorn grits (from Arkansas), omelettes, carnitas and crispy sweetbreads with waffles.

Johnson said they have considered brunch many times over the years, but – like a lunch service – the demand on staff is high.

“I don’t like to ask my staff to do something I’m not willing to do myself,” he explains, “so asking them to work a Sunday was never OK. Now, though, we have a crew, including the new GM, who wants to offer brunch.”

Johnson said he likes the continuity and accountability that having only one team brings to a restaurant. “It’s easier if one person is responsible for one station, and not two or three different people.”
​
Ludivine will have its full, outstanding bar available for brunch. In the truly innovative fashion that diners have come to expect, the restaurant will offer a play on the Bellini using cantaloupe puree, as well as an “Octopus Bloody Mary.”

“We braise octopus in tomatoes, garlic, onions – the things you associate with braised octopus – and then use the juice as a base,” Johnson says. “The effect is kind of like Clamato but better, and we’ll garnish [it] with a braised tentacle.”

Service will be from 11 a.m. to 2 p.m. Reservations are highly recommended and can be made at ludivineokc.com.