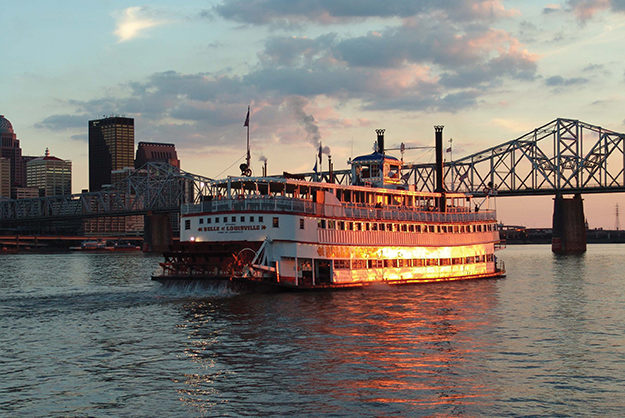 You Know The Old Joke, “How Do You Pronounce The Capital Of Kentucky? Louie-ville Or Lou-a-vul?” The Answer Is, Of Course, “Frankfort.” Louisville May Not Be The State Capital, But It Is The State’s Largest City. Situated On The Ohio River And Noted For The Kentucky Derby And The Louisville Slugger, It’s A Capital Destination.

Churchill Downs, home to horse racing’s most exciting two minutes, also hosts hundreds of other races during its season. Although racing in Louisville dates back to the 1780s, the first official race day here was May 17, 1875 and was the debut of the Kentucky Derby.

On the property, the Kentucky Derby Museum covers the history and color of the event with exhibits on clothing, famous horses, trophies and legends. The fun begins with a 360˚ film of Derby Day from dawn to dusk. Kids, and adults with few inhibitions, enjoy mounting a horse to participate in a video race.

Several tours of the racing facilities are offered, including a historic walking tour that includes trackside, paddocks and the Barn and Backside Tour (racing season only). Book an early a.m. tour to see morning workouts. Racing season is March-June and September-November with 76 days of live racing. Simulcasting goes on Wednesday-Sunday year ’round.

The Louisville Slugger Museum and Factory takes you from the tree to finished product, and the museum features famous baseball players and their equipment along with a number of interactive features. And you get a mini-bat of your own. You can’t miss this place on Main Street; just look for the big bat – all 120 feet of it. 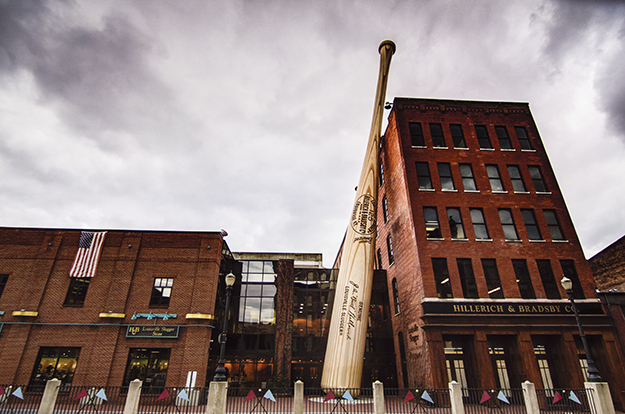 Bourbon – oh, yes. The Evan Williams Experience on Main Street offers an excellent tour of its artisanal distillery ending with a tasting. My favorite part – a chocolate bourbon ball at the finish!

The Belle of Louisville and its little sister the Spirit of Jefferson take guests cruising on the Ohio River.

The Louisville Zoo is worth a visit, especially its award-winning Glacier Run, a loose re-creation of Churchill, Canada. The polar bears are the star attractions, but the grizzlies, snow owls and Steller’s sea eagles are also cool.

Take a walking tour with Louisville Historic Tours. Not much for ghost tours, I chose an afternoon tour through one of Louisville’s most elegant and architecturally diverse neighborhoods with author David Dominé.

The 1923 Brown Hotel, like the Skirvin, has its own resurrection story. Once a social center of the city, the hotel weathered the rigors of the Depression and even a flood that had boats rowing through the lobby. Expressways and businesses’ exodus to the suburbs sealed its demise. After a 21-year hotel hiatus, the Brown re-opened, restored to its former glory. 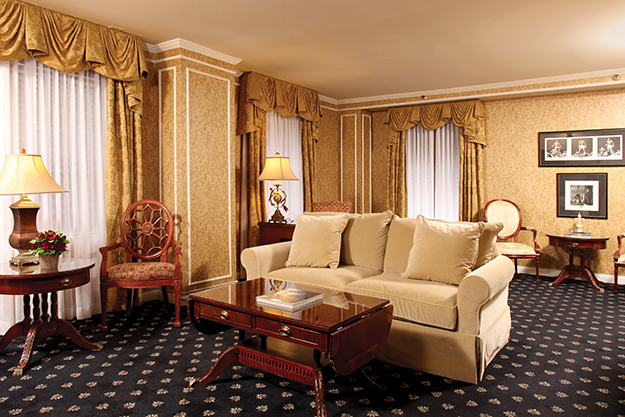 The soaring lobby features a coffered ceiling and elaborate ornamentation – a grand hotel, indeed. The hotel has hosted royalty, presidents and celebrities. I stayed in a suite named after hometown hero Muhammad Ali. His autographed boxing gloves and other memorabilia were on display in a massive breakfront in the dining room. You know you’re living the life of luxury when your room has a doorbell!

Named one of Southern Living’s “Ten Tastiest Towns of 2013,” Louisville has too many good restaurants for one writer to survey on a three-day trip. But I tried. Here are some of my favorites:

Decca, a two-family-owned eatery, was inspired by the owners’ love of vinyl records and features a small shop upstairs with books, vinyl and vintage gear and a basement bar with a combination of live music and vinyl. The main floor restaurant prides itself on local-sourcing and innovative menu items – so innovative I had to ask for definitions of at least five ingredients. 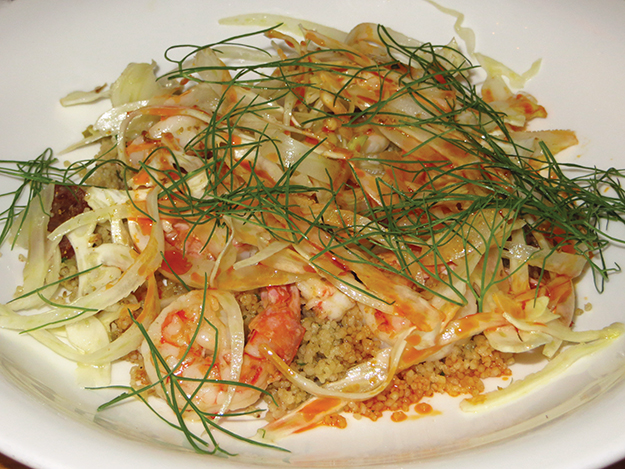 Proof on Main, in the wildly modern 21C Hotel/art museum, has a small but challenging menu. I wasn’t intrepid enough to try the charred octopus but went with the safe-sounding roast chicken served with savoy cabbage, garlic scape, yuzu and panzanella. I couldn’t figure out which was what – but it was all good!

Jack Fry’s has been a local favorite since the ’30s. Shrimp and grits is a signature dish but, wanting something light, I had a wonderful Chicken Cobb Salad.

Cutting-edge French cuisine was featured at La Coop, a tiny and charming eatery in NuLu, a hot and hip area on the east side of downtown. Gobs of goodies here, but my favorite was a salad with farm greens, pear, red onion and candied pecans dressed with a praline vinaigrette and topped with a scoop of bleu cheese ice cream – I could have licked the plate!

When the Twenties were roaring, over a thousand guests would gather at the Brown Hotel to dance the night away. Hunger would hit in the wee hours and the chef, tired of serving ham and eggs, invented a new dish – the Hot Brown. You can get this dish in many local restaurants but you really need to have it at the Brown Hotel. An open-faced turkey sandwich with bacon, sliced tomatoes and Mornay sauce, this is comfort food at its best. 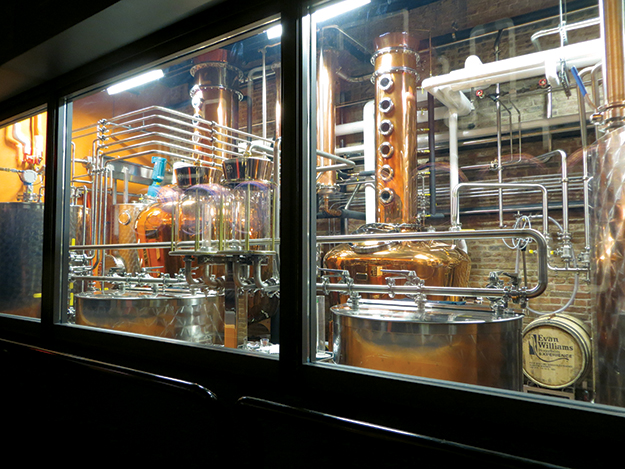 More Than a Tee Shirt

Looking for local souvenirs? Consider a hat or fascinator at the Kentucky Derby Museum gift shop. The gift shop at the Brown carries authentic Hot Brown pans. Louisville Stoneware has a 200-year heritage of fine stoneware; shop here for beautiful gift and utilitarian pieces. Chocolate bourbon balls also make a nice gift – but they may not make it to your destination. Like potato chips, it’s hard to stop with just one.

Louisville’s Centennial Festival of Riverboats runs from October 14 through 19 and celebrates the 100th birthday of the Belle of Louisville, the oldest operating Mississippi-style steamboat in the nation. Celebrations include visiting steamboats, steamboat races, steamboat cruises, lots of local food, libations and art, balloon glows, a boat parade and a giant fireworks display. Come sing “Happy Birthday” to the grand old gal. P.S. That song was written right here in Louisville by two sisters, Patty and Mildred Hill! 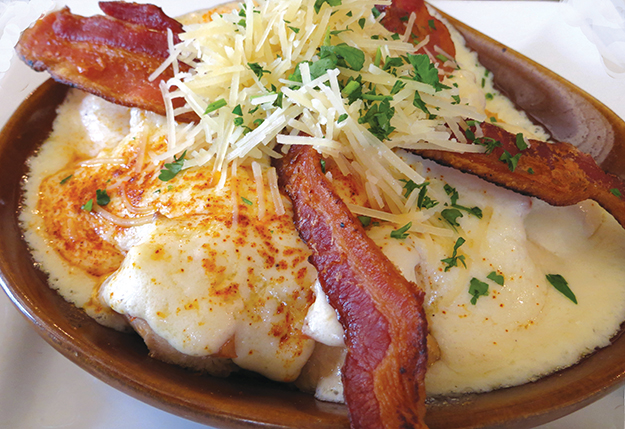 The Hot Brown Was Created By Chef Fred K. Schmidt In 1926. It Has Been Featured In Publications From Southern Living To The Wall Street Journal And On TV From The “Today Show” To “Man v. Food,” And Is Printed Here Courtesy Of The Brown Hotel.

2 Roma tomatoes sliced in half

• In a two-quart saucepan, melt butter and slowly whisk in flour until combined and a thick sauce (roux) forms. Continue to cook the roux for two minutes over medium-low heat, stirring frequently. Whisk heavy cream into the roux and cook over medium heat until the cream begins to simmer, about 2-3 minutes. Remove from heat and slowly whisk in Pecorino Romano cheese until the Mornay sauce is smooth. Add salt and pepper to taste.

• For each Hot Brown, place one slice of toast in an oven-safe dish and cover with seven ounces of turkey. Take the two halves of Roma tomato and set them alongside the base of the turkey and toast. Next, pour one half of the Mornay sauce in to completely cover the dish. Sprinkle with additional cheese. Place entire dish under a broiler until cheese begins to brown and bubble. Remove from broiler, cross two pieces of crispy bacon on top. Sprinkle with paprika and parsley and serve immediately.