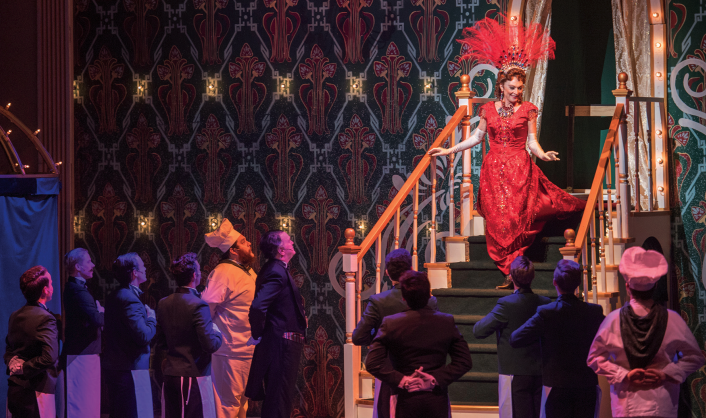 A trio of theatrical crowd-pleasers.

For Oklahoma theatregoers, the musicals presented by Lyric Theatre at the Civic Center are a staple of summer entertainment. Lyric is known for bringing in national talent, as well as local actors, singers and dancers to create Broadway-worthy productions. This summer, Lyric is delivering three shows that should not be missed. As always, this summer’s shows include a family favorite, a great American musical and a director’s choice.

A lot has changed in the theatre world over the last two years, and producing artistic director Michael Baron was proud to note that Lyric has always been ahead of the curve. “We’ve always cast in diverse ways, we’ve always hired diverse design teams,” he said. “Since COVID, many performers have moved back to Oklahoma. I’ve been able to hire a lot more people and invest in a lot of local actors of diversity. I want for these performers to be able to express who they are and their culture in the role, even if it’s a classic show.”

Roald Dahl’s Matilda, presented by Express Employment Professionals, takes the stage first, June 21-26, and is appropriate for all ages. With British humor, an interesting, pop-sounding score and over-the-top characters, Baron said, “You would think Matilda is geared towards kids, but it’s actually a very entertaining show for every age.”  The story follows Matilda, a gifted young girl (in several ways), navigating life at a boarding school with her fellow students. This will be the first professional production of Matilda in Oklahoma City.

Continental Resource’s great American musical is Rodgers & Hammerstein’s Carousel, happening July 5-10. This show features a huge cast, with both a dancing and singing chorus and 25-piece orchestra on stage. Though Carousel is a darker show, Baron said, “It really is about second chances. Even though they’re all struggling, the characters come together to show the importance of family.” This production is appropriate for anyone who loves theatre, but it may raise questions on marriage and relationships.

Kinky Boots is finishing up the summer musicals July 19-24 and will be a blast for ages 12+. Written by the hilarious Harvey Fierstein and featuring original music and lyrics by Cyndi Lauper, this Tony-winning show is sure to have the audience on their feet, wishing they had those thigh-high boots for themselves.

Baron is excited to be heading back to the Civic Center after a two-year hiatus. “It’s the first time we’re back in the space, and to be back in that huge hall with thousands of people with a real orchestra is celebratory. I wanted to make sure that when we came back, we weren’t operating out of fear.” Patrons aren’t required to wear a mask or show a vaccine card for any of these performances. For more information on the current Lyric season or to purchase tickets, visit lyrictheatreokc.com/tickets.