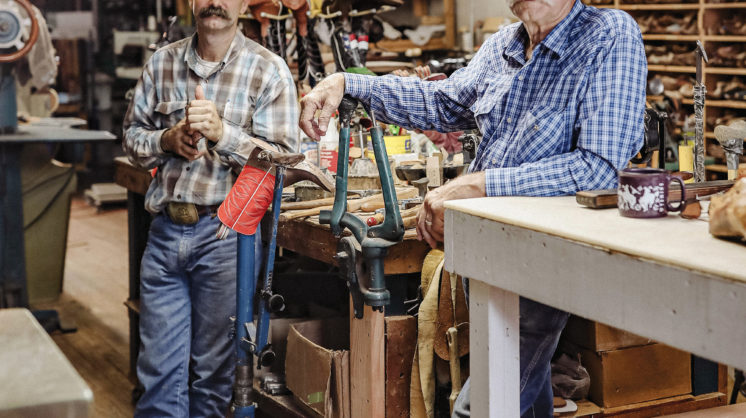 It’s July in Oklahoma. A light breeze pierces the stagnant air and heat hanging over downtown Guthrie. On an otherwise silent city block lined with century-old buildings, the stillness is interrupted by the creak of a metal sign. It’s hand-painted, bearing the image of a single boot and the words “Dorwart’s Custom Boots.”

An old Chevy truck idles to a stop in front of the shop. Black cowboy boots – as worn as the truck – drop to the pavement as a graying, mustachioed man in a stained leather cowboy hat climbs from the driver’s seat. 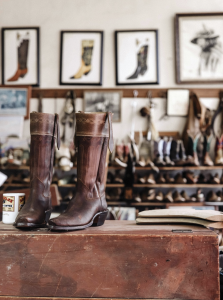 This is Mr. Dorwart; Raymond, or Ray for short. He, along with his business partner, Bo Lockhart, are better known as two of the most prominent custom cowboy boot makers in the United States.

Starting in 1989, Dorwart’s Custom Boots became a household name for those looking for made-to-measure boots – personally measured and designed. Dorwart and Lockhart sell boots ranging from $1,500 to $3,000 – or more, depending on the boot – to people throughout the country, even in Canada and Japan. 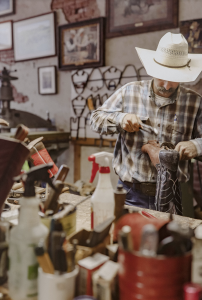 Humming fans are heard from the open entrance in an effort to quell the summer heat. As Dorwart steps into the old, Victorian-era building, Bo Lockhart shoots a quick a smile from behind his cluttered workbench.

This is no store; it’s a laboratory of leather. Currently operating machinery dating back to the late 1800s lines the walls alongside miscellaneous art. Each of the shop’s walls tells a story. 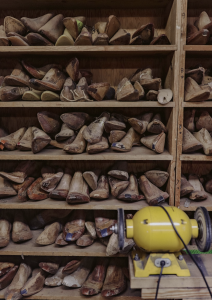 There’s no counter or register. The only way to navigate the shop is via the footpaths between the various benches; each occupied in different stages of boot creation. Smells of leather and polish float through the air as Dorwart and Lockhart work under fluorescent lights.

Traditional cowboy boot-making is not a profession one stumbles into. The craft is passed down from craftsperson to craftsperson over generations.

“This all started in the 1980s up at a farm in Wyoming,” Dorwart says. His tone is measured and his words are chosen with precision. “I was workin’ as a cowboy when I had a horse go down with me. Got hurt pretty bad, so I talked with a friend from another ranch about what we were gonna do. I wanted to make saddles; he convinced me to make boots.” 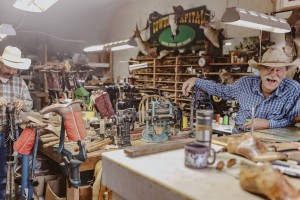 Dorwart was in his early 30s with only a Chevy truck, a bedroll and a saddle. He traveled to Utah and paid his way into a two-week apprenticeship to learn to make boots.

“I only knew about boots from what I’d experienced,” Dorwart says. “I’m not tryin’ to brag here, but he told me I was a master boot maker. I don’t think I am, ’cause I keep learning every day; even from a joker like Bo.” Lockhart laughs. Dorwart’s laughter bellows as his leathery, hardened hand smacks the bench.

Dorwart said he went back home to Nebraska to start his shop in 1982, and eventually met Jay Griffith – a boot maker from Fairfax, Oklahoma. Griffith convinced Dorwart to work for him for 10 days, and spent the next seven years trying to talk Dorwart into working full time at his shop. By 1989, Griffith sold his Fairfax interests and relocated, with Dorwart in tow, across the street from current-day Dorwart’s Custom Boots. 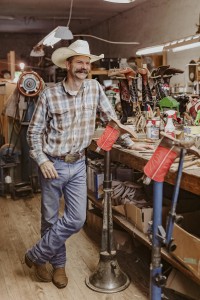 Two years. That’s all Dorwart had in mind for Oklahoma. Today, the shop is a community staple.

“Around 1994, everyone in Guthrie would wave at me and I wondered why,” Dorwart reminisces. “It was strange because it was the first time since I was a kid, I remembered being in one spot long enough for people to know me.”

People across the country took notice of Dorwart’s expertise, including cowboys like Bo Lockhart.

“I was riding horses around Guthrie around November before working here,” Lockhart says. “It was gettin’ colder. Last thing I wanted to be on was a horse. So, I started hangin’ around here after a friend recommended him. Once I saw what he was doing, I was persistent to get in.” 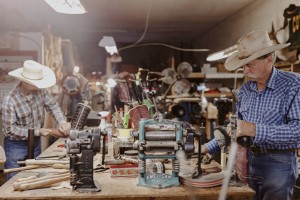 Dorwart agreed to give him for a four-month trial under one condition.

“‘I own you for four months,’” Lockhart recalls. “‘Come rain or shine, you’re mine.’ I don’t think he was ready for me to agree to it. I started in April three years ago and he still ain’t been able to run me out.”

Dorwart’s accepts boot order forms and in-person meetings for customers; however, the in-shop interactions are preferred to understand the buyer – and thus understand the boot’s design. Regardless of veteran or newcomer status, Dorwart’s Custom Boots has seen every occasion for a pair of boots.

“I take most pride in making boots for those who want to use them for what they were made for,” Dorwart says. “If we can make you something reliable that also shows who you are, then we’ve done our job.”