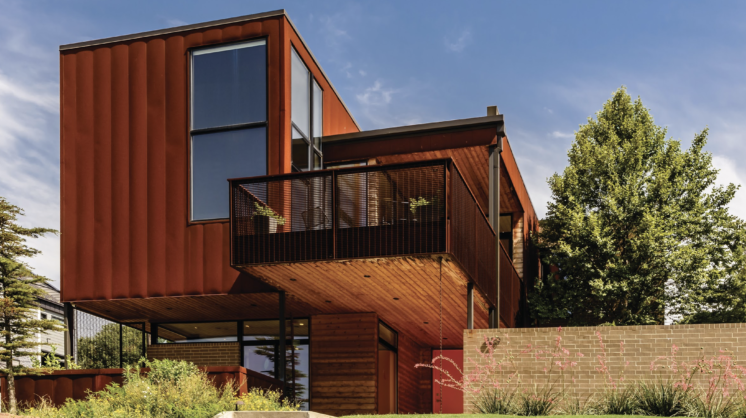 Balancing on second-story rafters to address balcony drainage, Lea Morgan wondered if this hands-on approach to building a new house had gone too far – or too high, in this case. Fortunately, Mike Morgan stepped up to finish the job and relieve his wary-of-heights wife.

“It took blood, sweat and tears all around to get here,” says Lea. “We didn’t really know if we could do this.”

Today, when you see the Morgans’ cedar-and-steel urban cabin sitting atop the 7th Street hill in the stylish SoSA (South of Saint Anthony) neighborhood, it’s obvious that they could. 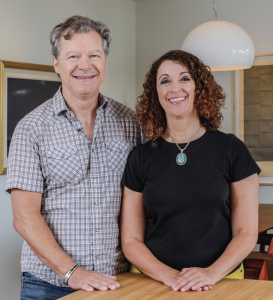 The Morgans literally handled many projects to complete their home – framing (and reframing) a corner wall of windows, securing a wonky staircase and prewiring for home automation, sound and security cameras. Sprinkle in a team of artists, neighbors, friends and subcontractors and, in 2016, it was a done deal.

Their journey to build their modern 2,000-square-foot home started in their former neighborhood of 15 years. When Crown Heights neighbor and friend Brian Fitzsimmons of Fitzsimmons Architects shared his plans to build his new home in SoSA, Mike was intrigued.

“Much to Lea’s chagrin, I’m always looking for a new project,” he says. “I was kind of getting tired of the old house thing. I thought building a new house would be cool.” 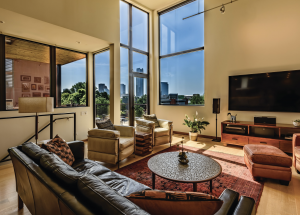 The notion gained momentum after several meet-ups at the old Ludivine bar. Mike would talk about his vision, while Fitzsimmons sketched on a napkin.

“I worked with Brian closely – maybe a little too closely – on design,” Mike says with a smile.

“Mike is type-A enough where he pretty much knew how he wanted everything,” Lea says. 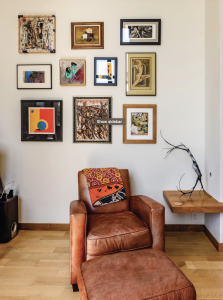 She said she was granted “veto power” on Mike’s designs, but seldom had to use it. Once Fitzsimmons Architects finalized the plans, the Morgans started collecting construction bids. Unfortunately, they were outrageously high.

“We about gave up on the project,” Mike says.

Then, another idea struck: Manage the construction themselves. The Morgans were familiar with the ins-and-outs of building – they had previously worked with a construction company to build a new home and lived in several homes during their 31 years of marriage that required complicated projects. They enlisted long-time friend Larry Dean Pickering to join Mike in general contracting duties. With no construction business office in play, Lea handled the paperwork and payments to subcontractors. For two years, it was all-consuming. 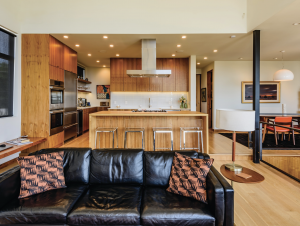 “It was hell,” she laughs. “I’d come early in the morning to get things started. Then I would come at lunch to check things out. Then I’d come after work. Sunup to sundown, every weekday, for a few years – it was hard, hard work every day for a long time.”

It was also a highly collaborative effort. With a longstanding love for art, and a collection to prove it, the Morgans have a network of artistic friends – talent they called upon throughout the project. Steel artist Klint Schor created a custom powder bathroom sink and countertop, as well as a steel planter in the courtyard. Artist Randy Marks landscaped the sloping front yard, mixing native grasses, large boulders, Lebanon cedars and wildflowers.

In addition to being their architect and new SoSA neighbor (he lives across the street), Fitzsimmons sourced panels of reclaimed steel grate flooring from the old Bob Howard building downtown. Adding to the steel theme and maximizing the downtown skyline view, the panels were fabricated by Logan Filkins of Bāsik Design to smartly line the balcony. 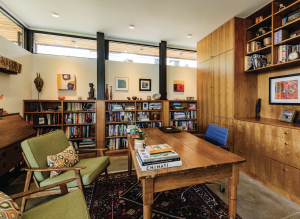 “We wanted something modern, but we still wanted it to be warm and cozy,” Mike says.

One way they achieved this balance is in flow of the house. Pass the large COR-TEN rusted walls hugging the courtyard, open the door, and you are greeted by a small entry. Around the corner is the office with lots of light, a smattering of books and collectibles and a private courtyard view. As you climb the stairs, the spaces get bigger. The second floor opens up to a combined dining, living and kitchen area, bright and airy with floor-to-ceiling windows that offer expansive downtown views.

“Even though you get used to the view, we know it’s pretty special to have it,” Lea says. 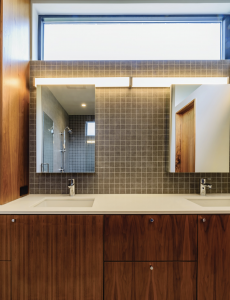 Mid-century modern-inspired carpentry throughout the home also adds warmth. Joe Dodrill, who is now part of We3 Dwellings, cut pairs of walnut panels from the same pieces of wood, resulting in interesting matching wood grain patterns.

Mike describes the interior design as “haphazard and eclectic,” an ongoing and enjoyable process for the Morgans. Their first art purchase, a desert sunset acquired 25 years ago in Taos, hangs behind the dining room table, flanked by 1960s-era orange office chairs – finds from ReModernOK on Western Avenue. A Navajo rug, repurposed as a decorative runner in the office, echoes their love for traveling the Southwest. Every piece of art is connected to a place, friend or story. One painting even tells a mystery.

“We have a piece of art that we found in our lawn,” Mike Morgan said. “We decided to hang it.”

The painting (lost? a gift?) appeared in the front yard June 15. The Morgans asked friends and neighbors if they knew anything about it, which is when Fitzsimmons shared that someone once put art books on his front doorstep – a modern-day mystery for both houses. Another connection between them: Fitzsimmons received the Residential Architecture Merit Award by the American Institute of Architects in 2018 for his work on the Morgans’ home. 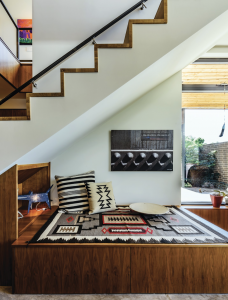 The Morgans have forged strong friendships with their SoSA neighbors – people of all ages and backgrounds – who share mutual appreciations for downtown living, art and architecture. When a couple started building down the street, a few steps behind the Morgans’ building process, the group gathered every Sunday for “construction meetings” to discuss experiences and advice over dinner. The couple even hired the Morgans’ carpenter.

“Some of our best friends are our neighbors now,” Mike says. “We text and talk porch-to-porch.”

Social-distanced happy hours in the courtyard are also commonplace these pandemic days. Since March, the Morgans have spent more time than ever in their home, resulting in a new appreciation of the spaces they worked so hard to create.

“Spending time being here has been really pleasant and nice,” says Mike. “I can’t imagine any place I’d rather be.”